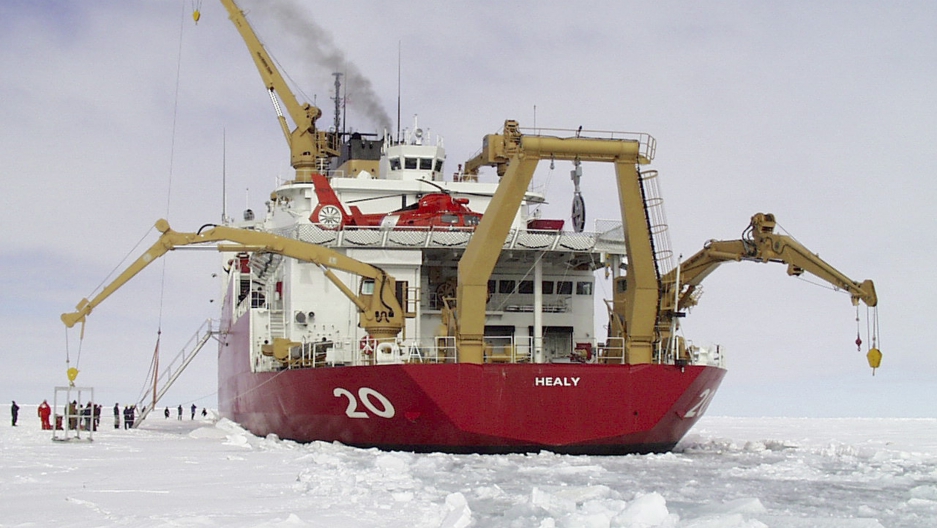 US Coast Guard Polar Icebreaker/Research Vessel Healy is pictured breaking ice. The US has only two functioning Arctic icebreakers and President Barack Obama wants to move more quickly to buy newer vessels for use in the Arctic.

The United States may be a powerhouse with military hardware, but it has fallen woefully behind when it comes to icebreakers.

President Barack Obama said this week in Alaska that we need more icebreakers and proposed to "accelerate acquisition of a replacement heavy icebreaker to 2020 from 2022."

The US has fallen behind other nations in terms of resources in the Arctic. Currently, the US has two fully functioning Arctic icebreakers — one is 40 years old and the other is 15.  Rear Admiral Jeffrey M. Garrett served as the first commanding officer for the USCGS Healy, the newer of the two ships.

This compares with Russia's 40 icebreakers and another 11 ships in the works. Not to mention, says Garrett, South Korea, Japan, China, India and South Africa also own fully functioning icebreakers operating in the region.

"I don't think it's as much a competition with other countries. ... It's really not an arms race. It's really can the United States have the assets that it needs to support its national interest."

"And because we have longterm interests in the Antarctic [as well], one old icebreaker and one newer one just isn't enough. Because if you can't really be on the scene, you really are not going to be a player in the long run."

Icebreakers are expensive ships to build. "To build one ship, although it's just a tiny drop in the overall federal budget, it's a very big hit on the Coast Guard's budget," Garrett explains.

President Obama says he plans on working with Congress to fund an expanded icebreaker fleet, "to ensure the United States can operate year-round in the Arctic Ocean," he says.