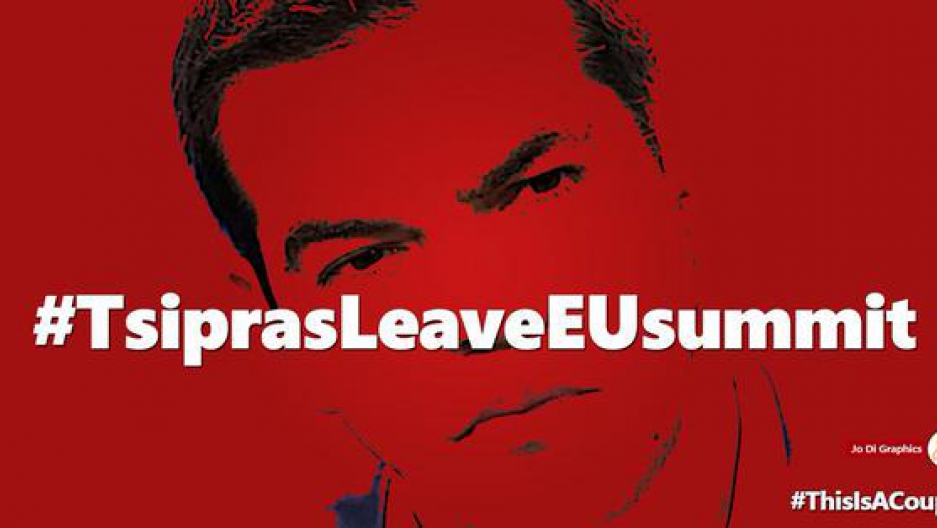 An image widely circled on the #TsiprasLeaveEUSummit hashtag.

The Greeks may have gotten the worst end of the negotiations with its eurozone creditors over the weekend, but at least they won on Twitter.

Greek Prime Minister Alexis Tsipras agreed to a set of austerity measures and economic reforms that were more severe than what Greek voters had rejected in the referendum on a proposed deal last Sunday. VAT tax increase, pension cuts, mandated government spending cuts and the sale of 50 billion euros worth of state assets, among other provisions, were the price the country had to pay to stay in the eurozone and obtain emergency bailout funds needed to reopen its banks. Now the question is whether he can can the Greek Parliament to back him, by no means a sure bet.

Anger over the Eurozone demands, largely directed at Germany, led the hashtag #TsiprasLeaveEUSummit to trend in Greece, while #ThisisaCoup trended internationally.

In Greece the #ThisIsACoup (#2 hashtag worldwide) being replaced by #TsiprasLeaveEUSummit

The #ThisisCoup hashtag was started by activists in Barcelona, some with ties to Spain’s Indignado movement, according to a report in the Guardian. It has been used more than 360,000 times.

Some of the tweets posed questions that will still be relevant in the days to come. Will anger over the agreement, and continued economic woes, help bolster extremism in Greece, and lead to further gains by the the far-right Golden Dawn party? Canadian activist Naomi Klein thinks so.

Are they going to act all shocked and innocent if Greeks vote for neo-nazis next time around? #ThisIsACoup

Many others suggested that the nature of the deal threatened the viability of the EU as a political and democratic entity.

Memes and images, many repurposed from earlier moments in the #GreekCrisis, were popular. A simple image of Tsipras overlaid on a red background was one of the most widely circulated.

Much of the anger was directed at German Chancellor Angela Merkel and her hawkish finance minister, Wolfgang Schäuble.

Get your filthy hands out of my country & europe u greedy piece of trash! #ThisIsACoup #Schaublexit #Schaeuble pic.twitter.com/g4DbGgBPjA

#ThisIsACoup #Greece and the way Europe is privileging money over democracy. pic.twitter.com/B72QLAc0zB

Others went for a more classical approach.

And of course, cat memes were involved.