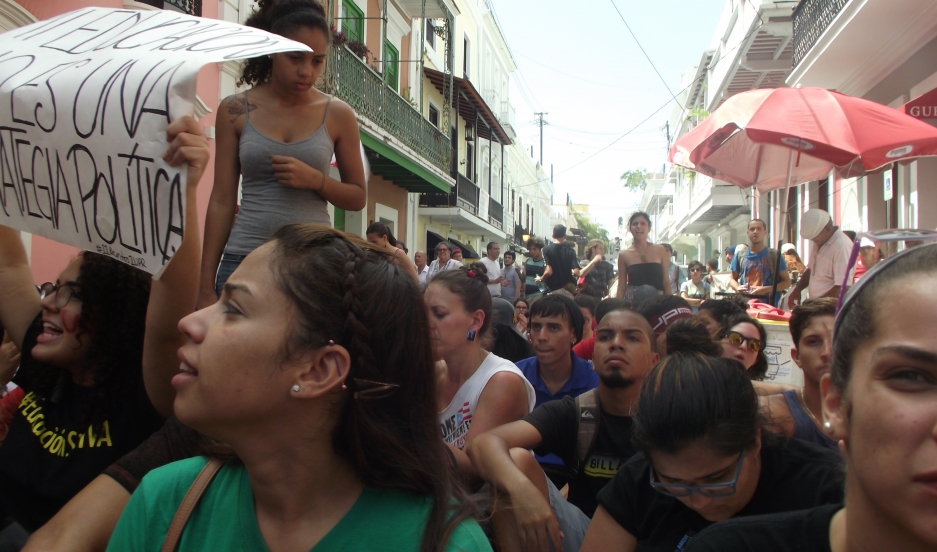 After almost four hours of protest on May 13, students sit down while they await to hear the results of the conversation between student representatives and government officials.

It’s rare that a student movement faces off against a governor and wins, let alone after just one large protest, but that’s what happened in Puerto Rico.

Puerto Rico Governor Alejandro García Padilla relented Wednesday to student demands that he drop a proposal to cut $166 million of funding from the University of Puerto Rico, or about 20 percent of the budget. The $9.8 billion budget proposal released yesterday calls for a $674 million reduction in government spending, but largely spares the university, though it does reduce student aid by $5 million.

García Padilla decision to reverse course came after thousands of students and their supporters filled the streets of San Juan last Wednesday to protest the cuts. As the Latino Rebels blog noted, the demonstrations were largely ignored by US Media, but that didn’t stop them from being successful — at least in in the short term

“I think it’s a small victory. I think we need to take it with a lot of caution,” says Rebeca Agosta, a 23-year-old student activist at the University of Puerto Rico. “These measures seem to be temporary remedies. Our economy is barely surviving. We definitely need better solutions.”

Puerto Rico is facing a fiscal crisis with no easy way out. The island is over $72 billion in debt, most of it to large US investors such as mutual funds, and is in the middle of an eight year recession with unemployment steadily over 13 percent. The government is struggling to raise revenues and faces high borrowing costs after its debt was downgraded to junk status last year.

For now, the students appear to have convinced the governor that cutting the university’s budget isn’t going to help solve the problem. 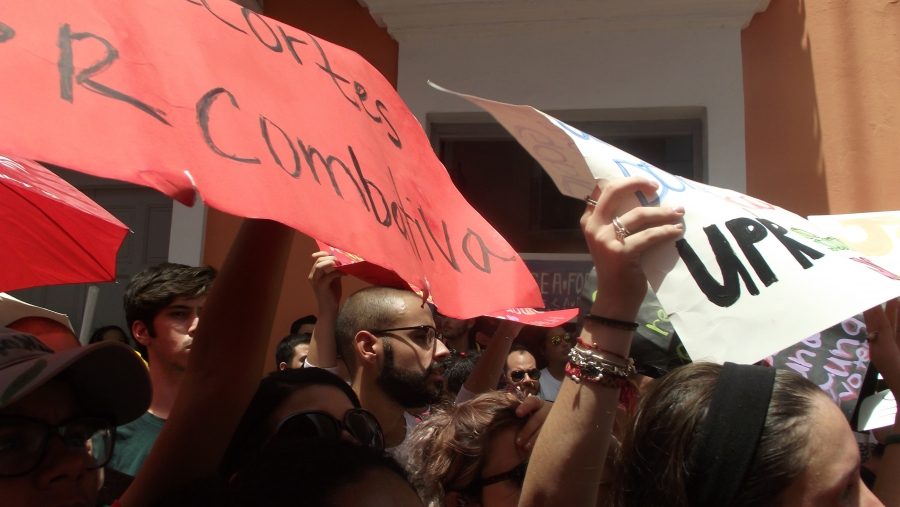 Students hold signs against budget cuts to the University of Puerto Rico durng a protest on May 13.

“This experience has reminded us that when we come together, not just the students but the professors, the personal and the community, we are a force to be recognized with, but it’s not over,” Agosto says.

Students believe that the governor's proposal to cut university spending may have been a political maneuver intended to get support his plan to implement a VAT or “value added” tax. Student leader Christopher Torres, a 25-year-old computer engineering student, says the governor told student activists that he wouldn’t have to cut the university’s spending if the tax increase was approved. If the plan was to get their support, it didn’t work — students plan to hold a strike if the tax increase is approved.

“We’re saying you can’t continue paying for your mess. You have to do something else. It’s too much,” Torres says.

The student movement in Puerto Rico does more than just protest. When student leaders met with García Padilla last week, they came with their own suggestions for government spending cuts. One example: Reduce contracts with private companies that tutor high school students, and instead have the university provide the service.

“We’re not against cuts necessarily. What we’re saying is cut in these other areas where you’re spending too much before giving this blow to the university,” Torres says.

The protests and the negotiations that followed have received scant coverage in the US media. Agosto, a journalism student, wasn’t surprised.

“I wasn’t expecting there to be a lot. I wish there was,” Agosto says. “I wish they would pay more attention to what is happening on our island because I feel people in the United States don’t really have a clear idea of what Puerto Rico is and the things that are going on here. People have a lot of stereotypes and misleading ideas because the media doesn’t really pay a lot of attention to us.’

“This is not just an issue in Puerto Rico. It’s an issue everywhere,” she added.

This article is part of SafeMode, PRI's project focused on international youth and security. Sign up for the SafeMode newsletter here.