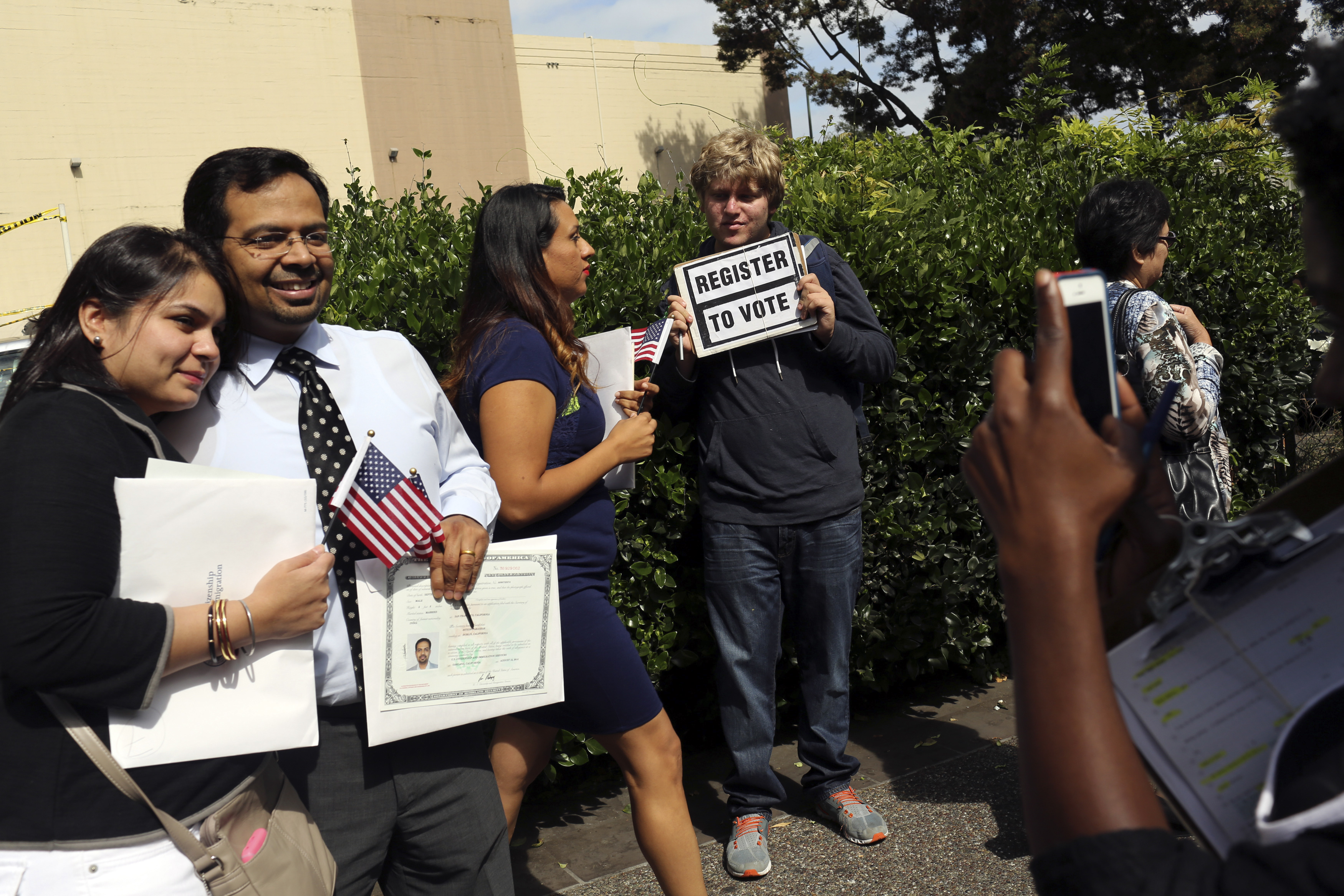 A man holds a voter registration sign while a couple has a souvenir photograph taken following a US Citizenship and Immigration Services ceremony in Oakland, Californiam on August 13, 2014.

This week, Oregon became the first state to use Department of Motor Vehicle records to automatically register residents to vote. Lawmakers in that state say it will add about 300,000 voters to their rolls.

“This bill is about making government work better — treating citizens as customers and giving them access to the service they expect,” said Oregon Governor Kate Brown. “When someone moves to Oregon, why should they have to fill out multiple forms for multiple agencies? They should be able to complete one form, one time.”

The new law uses the data on driver's licenses to automatically register Oregon residents if they haven't done so themselves. Potential new voters will have a chance to opt out of the program.

Now legislators in other states, including Pennsylvania, are considering following Oregon's lead. “We’re taking a great idea from Oregon and expanding it,” says Pennsylvania State Senator Vincent Hughes. “The Oregon law relates directly to their Department of Transportation interactions. What we’ve learned from the Oregon concept is, why should we stop with the Department of Transportation?”

Hughes wants to have multiple government bodies involved in the voter registration process.

“If [citizens are] applying for a state loan or a state grant for their children to go on to higher education and get a college degree, if they’re applying to a state university, if they need assistance in our Department of Human services — just about any interaction with the state of Pennsylvania, our bill will provide the same option [for voter registration,]” Hughes says. “They’ll automatically be registered to vote, and they’ll get an opportunity to opt out if they choose.”

Hughes argues that almost every single adult citizen has some interaction with a government agency at some point in their lives, so tapping their power could have a massive impact on voter rolls. He estimates the initiative could help as many as 2 million adults — of the 10 million adults that live in Pennsylvania, about 8 million are already registered to vote.

“If Oregon can do about 300,000 largely through their Department of Motor Vehicles, we can probably match and increase that number through a similar department [in Pennsylvania],” Hughes says. “When you add on the other agencies and make it universal ... we can probably get real close to getting almost 100 percent of adults in Pennsylvania registered to vote.”

Some critics fear that the movement could disenfranchise individuals who do not drive, or those who do not actively engage with state agencies. But Hughes argues "this is just one tool to get people registered to vote. We should also be in the business of being active and aggressive in getting folks registered to vote [in other ways].”

Pennsylvania currently has a statewide voter database in place that is accessible to the public. Hughes hopes that other governmental systems can cross communicate to tell state workers when a person is not registered and then encourage them to do so. “Let’s utilize our daily interactions in state government ... to get people registered,” he says.

The initiatives being pushed by Oregon and Pennsylvania might find at least one supporter on the national level: In a speech delivered Wednesday, President Barack Obama suggested that mandatory voting in the United States, much like the system used in Australia, might be a good idea.

This story is based on an interview from PRI's The Takeaway, a public radio program that invites you to be part of the American conversation?