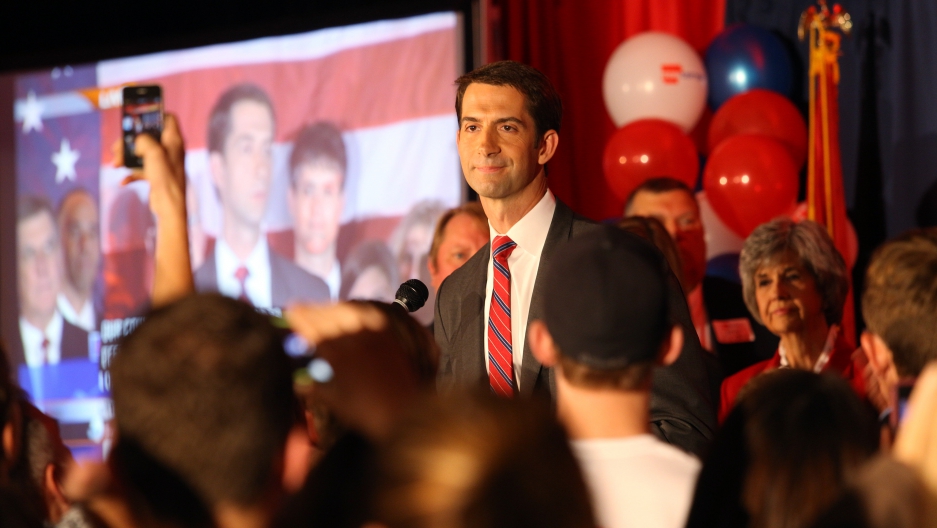 Republican Senator Tom Cotton speaks at his election victory party on November 4, 2014. The freshman senator from Arkansas is emerging as a vocal opponent of nuclear negotiations with Iran.

What do you do if you're a Republican and not happy with the way nuclear negotiations are going between US and Iran? You write an open letter. You might want to tweet it to Iran's Supreme Leader for good measure.

That's what Sen. Tom Cotton of Arkansas did, anyway. On Monday, he penned a blunt warning to Iran over the prospects for any nuclear deal. “[…] the President may serve only two 4-year terms, whereas senators may serve an unlimited number of 6-year terms," he wrote. "As applied today, for instance, President Obama will leave office in January 2017, while most of us will remain in office well beyond then—perhaps decades."

The not-so-veiled threat was that Republicans might undo any accords that President Barack Obama agrees to with "the stroke of a pen." Cotton and 46 other Senate Republicans signed the letter, and the freshman from Arkansas made sure it wouldn't escape the notice of Iran's leaders.

.@JZarif I wanted to make sure you saw this open letter from me and 46 of my colleagues http://t.co/NVWL4PSFi1 pic.twitter.com/rbqAniHbVD

Democrats, including Obama, have condemned the letter as reckless interference in the country's foreign policy. But Thomas Erdbrink, the New York Times' Tehran correspondent, says many people seem to forget there are countries other than the US involved in the nuclear negotiations.

Iran is actually negotiating with the five permanent members of the UN Security Council — the US, the UK, Russia, China, France — plus Germany. "So if a deal ... is made and ... canceled by an incoming American president ... then they would be violating international laws," he says.

Erdbrink says he spoke to some Iranians, including two businessmen who follow the Iran nuclear talks very closely. Although they're worried about the outcome of the talks, they thought the letter wouldn't have a lasting effect.

"They also think that since so many countries are involved, this deal would turn into an international treaty," he says. "If there is so much international pressure to make a deal, then they hope that the Congress will also budge."

Erdbrink also thinks that the fact that the letter was transmitted to the Iranian leadership via Twitter is interesting in itself. While Iran and the US have had no formal diplomatic relations for the past 35 years, now even Congress is engaging in direct talks with Tehran — of a kind. After Cotton's tweet, Foreign Minister Javad Zarif responded with a letter and a tweet of his own.

"What this, to me, highlights is that the taboo of having relations with Iran is just not there any more," Erdbrink says. "What we are seeing here is that two political groups in two divided systems are talking to each other. [And] once these two groups make a deal, we will see the knives being drawn by their opponents."