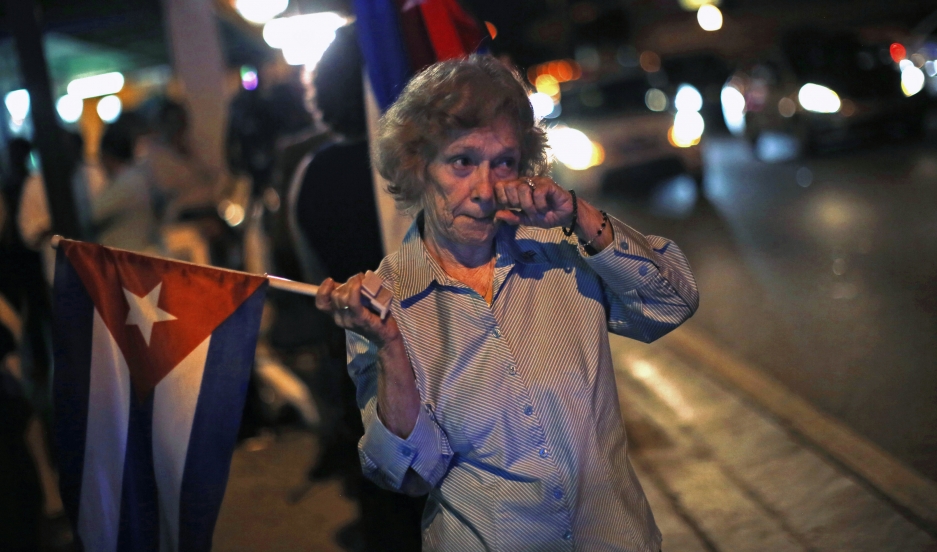 A Cuban exile in Miami's "Little Havana" neighborhood reacts after the US announced that it would restore diplomatic ties with Cuba. Washington severed relations with the island more than 50 years ago, after Fidel Castro took power.

Forget for a second that you live in the United States, that you know its laws, know English, know what a Social Security number is, let alone worrying about having one.

Now imagine that's the wave of information you are trying to absorb, quickly, in a small conference room in Miami. That's exactly what happens to some families when they arrive in the United States.

Miguel Laguna helps guide them through the bewildering process. He's a caseworker at Church World Service, a refugee resettlement agency with an office in the Miami area. Most of the Miami office's clients are Cubans.

Laguna goes over with the family how to take the bus, apply for citizenship and where to study English. It’s a lot to take in. 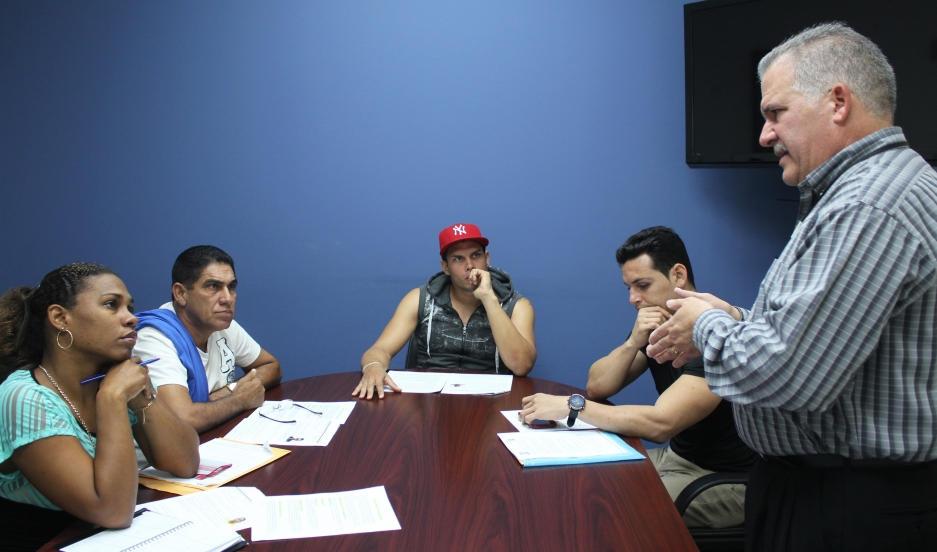 Miguel Laguna, a caseworker at Church World Service, a refugee resettlement agency, runs an orientation class about life in the US for a newly arrived Cuban family.

After an orientation session, I ask Ismael Ramos, the father of a newly arrived family, what he thinks of the information he’s received so far.

“This is a country of laws,” he says. “Everything is organized.”

Ramos sits with his wife, Ailén, and his son, also named Ismael. The family tells me it took two days and two nights in a small boat to reach Florida. They got lost in the Gulf of Mexico, but eventually made it. “The GPS broke, so we didn’t know where we were for a while,” Ailén says.

They say they left Cuba because there’s no work there. Ailén says she was a gym teacher making $12 a month, a pretty typical salary in Cuba. The family thought of leaving for years, but sped up their plans for fear that the United States' unique and controversial "wet foot, dry foot" policy might disappear.

That policy says that Cuban migrants who make it to shore — "dry foot" — won't be sent back, and will essentially be granted US residency after a year and one day in this country. The original intent was to drain the best and brightest from communist Cuba by dangling US visas, so some Cubans worry that better US-Cuba relations will lead to a change in policy. 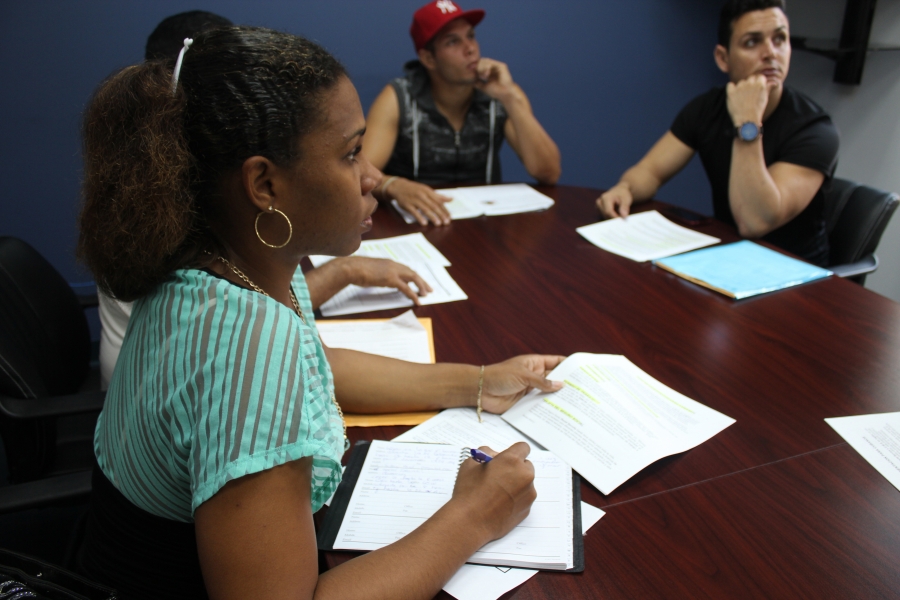 Ailén Ramos, a 25-year-old from Cuba, attends an orientation class about life in the US run by a refugee resettlement agency in Doral, Florida, just outside of Miami.

Only Congress can make changes to "wet foot, dry foot," and that could take a while. But the rumors that the policy might disappear persist in Cuba, and a rising number of people are leaving the island for the US on boats or, in some cases, by land through Latin America.

After the orientation, Ismael Ramos, the son, says he’s excited to be in the US. He’s 23 and wears a New York Yankees hat. When asked what he wants to do for work, he says, “I’d like to be a model, an artist.” But he quickly adds that he’ll do whatever job comes first. His dad wants to drive a truck, like he did in Cuba. His stepmom will look for restaurant work.

“They’re just scratching the surface here,” says Laguna, the caseworker. “Basically this is the beginning of the rest of their life.”

Laguna does note that this family has an advantage: They have relatives living in Miami. For Cuban refugees who arrive alone, there’s a lot of uncertainty.

“The first thing that I do is I pray for them,” Laguna says. It’s daunting, he says, to get to a new country by yourself “not knowing, well, if I don’t have relatives in Miami, what are they going to do with me?”

What happens, Laguna says, is “they’re offered the opportunity to go to another state. Some of them have to share the apartment with people that they don’t even know. And the fact that they’re so resilient, and the fact that they want to do that, that is admirable. I don’t think I could do that.”

That evening, I go a hotel called Extended Stay America, where some of those lone refugees stay until they are resettled elsewhere in the US. It’s near Miami's airport, surrounded by big office parks.

Outside the lobby, Cubans mill about and play cards. It’s like a street corner in Havana. They tell me about their first impressions of the United States. Everyone says it’s so clean. They call America “the shiny diamond.”

I ask them why they left Cuba. They all say similar thing: “the economy,” “jobs,” “no work.”

It’s an answer that fuels a growing argument: Why treat Cubans differently than Guatemalans who flee gangs and poverty? What about Mexicans wanting to send money back to their relatives back home, or people fleeing war and repression elsewhere who must petition for asylum in the United States? Why give Cubans a special pass?

Yaimedis Verdecia, a woman in her 20s, says Cubans still can’t travel so easily, unlike many Latin Americans. She felt trapped in Cuba in every sense.

Cuban Raúl Borrell steps up and says he left because of the economy — and politics.

“In Cuba, there’s only one party, one president, one law. No democracy,” he says. And until there is deep political change in Cuba, he says, US immigration policy toward the island should stay put.