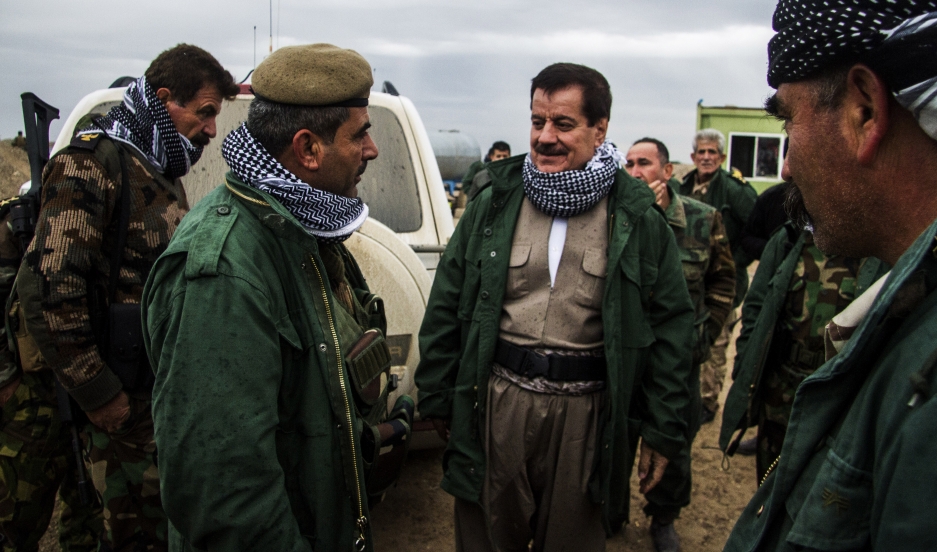 Kemal Kerkuki, commanding officer of Peshmerga forces outside of Kirkuk, speaks with his troops.

A convoy of six armored Peshmerga SUVs slowly roll through the town of Kharabaroot, just west of Kirkuk. On either side of the narrow dirt road, the houses are in ruins. Most have been completely flattened; the few that still stand are uninhabitable, not a single civilian remains.

For Iraq’s Kurdish Peshmerga forces, this is what victory looks like.

“They were very strong,” explains Kemal Kerkuki, the commanding officer of Peshmerga forces in this region outside Kirkuk, referring to the ISIS terrorist group that calls itself the Islamic State.

Standing at the town’s entrance, surrounded by the local fighters now stationed here, some snapping pictures of the visit, he recounted the battle just a few weeks prior. “It was a big fighting between us and them. [The] Peshmerga struggled here.” Kurdish officials say ten Peshmerga fighters and more than 100 men from ISIS were killed in the battle that reclaimed the town.

Kharabaroot is just one of a string of villages outside Kirkuk that Kurdish forces, heavily supported by coalition airstrikes, have taken back from the Islamic State in the last month. These victories, while strategically important, have also opened old wounds in a region of Iraq with a long history of tensions between it's Kurdish and Arab residents.

Kerkuki says ISIS caused the widespread destruction now visible in Kharabaroot. He says the group blew up the homes as they retreated and bobby-trapped others.

But Kharabaroot residents who’ve fled to nearby towns say it was the Peshmerga who destroyed their houses. An act, they say, aimed at making it harder for them, Arabs, to return home.

Kerkuki says that isn’t true, but he displays little empathy for the town’s residents.

“From this village they are from Daash,” he says, using the Arabic acronym for ISIS when asked why none of the civilians have returned. “They're not allowed to be here.”

Kerkuki says this entire village pledged loyalty to ISIS and allowing civilians back would be the same as ceding territory back to ISIS.

Originally Kurdish, Kharabaroot became predominantly Arab under former Iraqi leader Saddam Hussein’s so-called Arabization program. Saddam wanted the region’s large oil reserves, and saw the local Kurdish population as a threat to that. So he kicked them out and moved Arab families in.

That history is still fresh in the villages outside Kirkuk. Most of the Peshmerga fighters in this battalion either witnessed Saddam’s policy first-hand or have been affected by it. 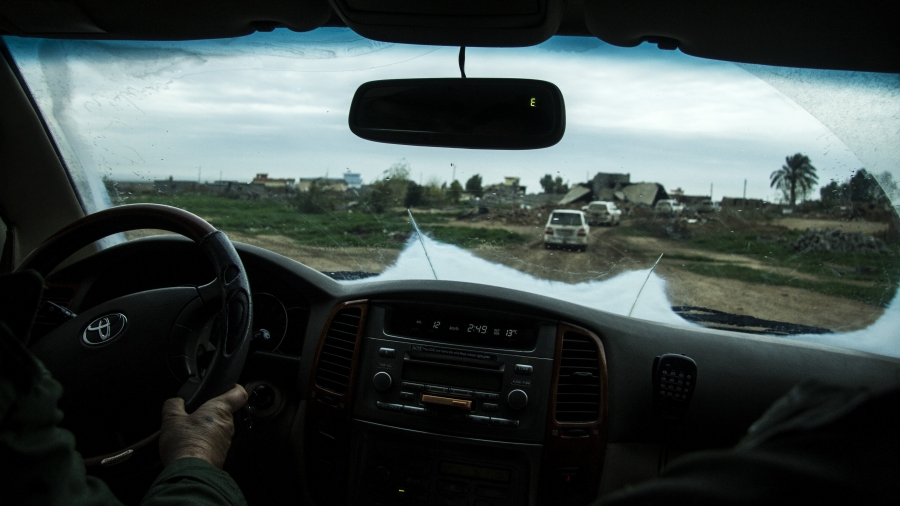 The village of Kharabaroot, near Kirkuk, seen through the windshield of a Peshmerga pickup truck.

“This video was taken in Kharabaroot,” one of the young fighters explains on the drive back to base as he scrolls through videos he’s taken over the past month on his phone.

One after another, the fighter plays videos of bloodied corpses of ISIS members, the fighter says, asking to be identified only by his nickname Kawa Muhammed.

In one video, the body of an Islamic State fighter is laid out on a flat-bed truck. Peshmerga fighters begin to kick and spit on the corpse. Muhammed explains this man, unlike the others, is Iraqi, from Hawija, another village nearby subjected to Saddam’s so-called Arabization program.

The fighter says he took the videos for the memories, but also “to show to other people a lesson. ... This is a lesson for us that we never have to trust Arabs. There’s no brotherhood [between us], it was erased by Arabs.”

When asked if he ever felt any brotherhood with Iraq’s Arabs, he says “we count them as brothers, but they never count us as brothers. [They] always like to wear black, they love violence, they misbehave with people.”

Kerkuki expresses a similar sentiment, he says he doesn’t believe iraq’s Sunnis will ever turn against ISIS. “If a group more extreme than ISIS came here, the Arabs would still support them,” he explains, shaking his head, “It’s ... I don’t know. It’s genetic.”

While Kerkuki won’t say there's a direct connection between Saddam's repressive policies against the Kurds and the fight against ISIS, he admits this fight is personal.

He says he can still remember watching his family’s village burn before being forced to flee. “I saw with my eyes,” he says as he sits beside a large Kurdish flag. “I [was] in that time in primary school.”

The village he saw burn as an adolescent is Qaradara, where he sits now. His ancestral home, just a short walk from here, has long since been destroyed, but in the wake of the US-led invasion of Iraq, his family was able to return to Qaradara and rebuild.

Now, it’s from here that his troops are taking the fight to ISIS, poised to retake even more territory.