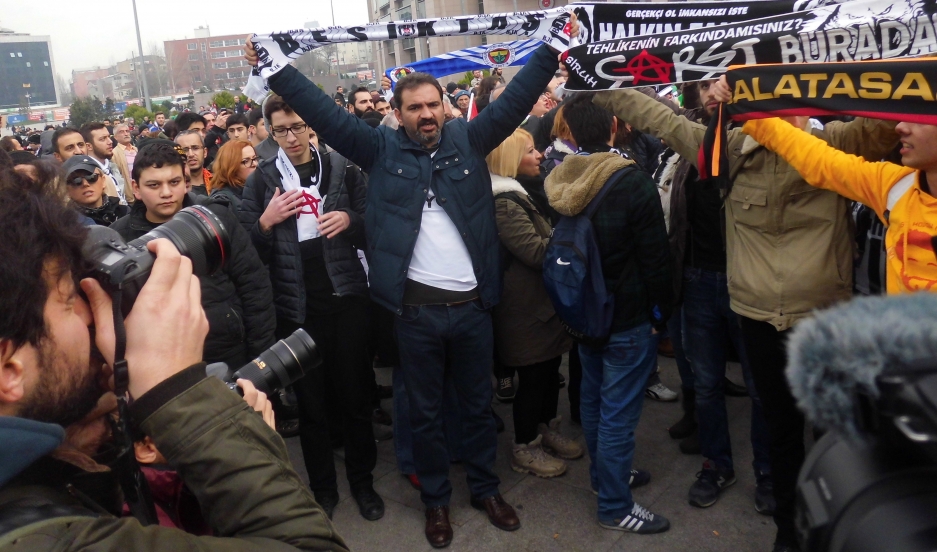 Supporters of other Turkish soccer teams rally in support of Carsi soccer fans Tuesday morning outside the Istanbul Palace of Justice.

At an Istanbul courthouse, 35 soccer fans stood trial Tuesday on charges that could lead to life in prison. Specifically, they're accused of trying to overthrow the government. Allegedly.

Carsi fans cheer on the Istanbul soccer team Besiktas — and they should be flying high. The team is defending its top spot in the Turkish league and facing some European powerhouses in regional championships.

But things aren’t so rosy for longtime fans like Cem Yakiskan who helped form Carsi back in 1982. He insists Carsi is a loose association of Besiktas fans without real leaders. He says members may act spontaneously against an oppressive government — but they don't hatch plots.

“It’s not as if there’s anyone with a remote control in hand that can push GO or STOP,” he says. “It’s a movement driven by people’s own conscience.”

But that’s not how the indictment reads. In fact, Yakiskan is accused of using his pizzeria last year as a cover for a more sinister purpose.

The prosecutor suggests Yakiskan and Carsi supporters planned to invade the prime minister’s offices, sow chaos and bring down the government. 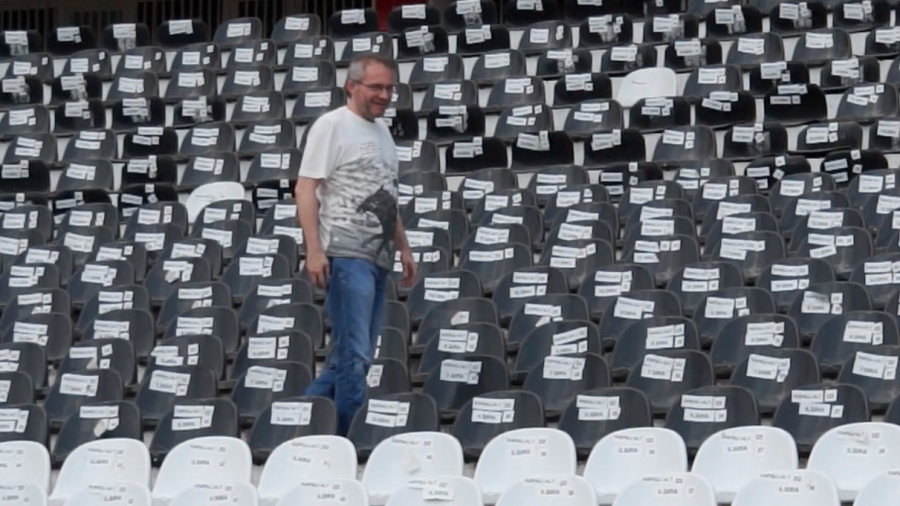 Cem Yakiskan walking in the stands of Besiktas' recently demolished stadium. He helped form the fan group Carsi back in 1982.

Evidence of the nefarious plot? Among other things, the government has transcripts of tapped phone calls where Yakiskan offers his brother-in-law a deep discount on pizzas to feed Gezi Park protesters.

Defense attorney Inan Kaya says it would be almost funny — except prosecutors are seeking life sentences against Yakiskan and his "co-conspirators."

“It’s absurd but it’s real. They are being judged now. And [prosecutors] want 49 years. It’s not a joke,” Kaya says.

Besiktas’ most recent league match was thinly attended. The team’s stadium is being rebuilt and games are held in various smaller venues in the boondocks. But that’s not the only reason fewer people are showing up.

Many fans are boycotting a new e-ticket system that requires fans provide biometric details. That allows the government to track who attends matches and — the government says — to crack down on stadium violence.

But many worry the government wants to crack down on soccer fans who join in anti-government protests.

Altay Ulug, 27, stands in a small group of friends and family. They are going along with the new tracking system, but reluctantly.

“You have your ID number and your name on it and your picture on it. Supporters didn’t want this because it’s like you’re being tagged in the stadiums,” he said. “Also, it’s something silly because most of the stadiums are empty now.”

Ulug says Carsi was admired for being on the frontlines during the Gezi Park protests. In fact, Carsi members are often part of anti-government demonstrations. But he says charges of a coup are exaggerated.

But it’s not just fellow Besiktas fans who think the charges are a stretch.

Human Rights Watch called the case “a ludicrous travesty.” They cite the wiretaps that show no apparent relevance to a plot. The government claims possessing gas masks constituted a crime — but it was obvious the masks were necessary to counter the widespread use of tear gas by riot police.

After a recent match — in which Besiktas trounced Kasimpasa 2-0 —  Serdur Aydin, 35, left the stadium with his toddler son. He says the government is just trying to make an example of last year’s protesters. He predicts the charges won’t stick.

“They were right, they were totally right,” Aydin says of the protesters. “I think that nothing will happen.”

Whether one fan’s optimism is well-founded or overly idealistic is difficult to say. The Turkish government is becoming increasingly aggressive in its efforts to silence its critics — arresting opposition journalists, academics and casting a wide net to contain the enemies of what Turkey’s president boldly refers to as the “New Turkey.”