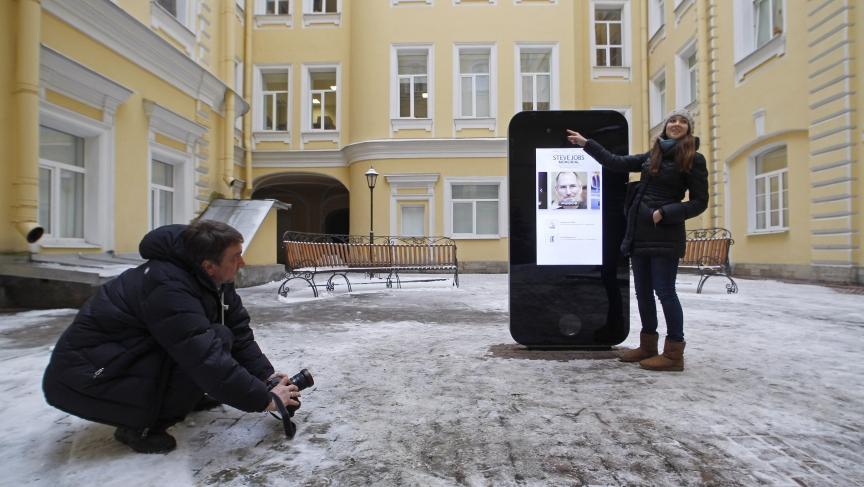 A photographer takes a picture of the then recently erected iPhone-shaped monument in memory of Apple's late co-founder Steve Jobs in the yard of the State University of Information Technologies, Mechanics and Optics in St. Petersburg January 10, 2013. Officials took the monument down after Apple's new CEO Tim Cook publicly revealed that he is gay.

Russia's controversial monument to Steve Jobs is back in the news. Shaped like an iPhone and more than six-feet tall, the statue belongs to the West European Financial Union (ZEFS), which installed it in the courtyard of the St. Petersburg State University of Information Technologies in 2013, only to remove it last month, as a way of condemning Apple CEO Tim Cook's announcement that he is gay.

News about the apparently homophobic reason for the monument's removal caused a global uproar. The St. Petersburg university, however, soon claimed that the statue would return after ZEFS completed some necessary repairs.

It now seems clear that Russia's giant iPhone monument isn't coming back. On Monday, ZEFS announced it would auction the statue to anyone who promises to take it abroad. The starting price is set at five million rubles (about $95,000).

“Based on an internal vote, the company has decided to hold an auction. Roughly half of those who voted were against the idea of returning the monument to its place in St. Petersburg,” ZEFS explained in a press release.

Technically, the auction is already underway, though ZEFS reports that it has not yet received an eligible bid. The company appears to be receiving bids on the splash page of its main website, rather awkwardly through its general “feedback” interface.

After the removal of the Jobs monument, Vkontakte launched “Save Steve,” offering publicly to cover all repair costs and to reassemble the statue at its own headquarters, which is also in St. Petersburg. Following ZEFS's announcement today that the statue costs five million rubles and requires a promise to remove it from Russia, Vkontakte Press Secretary Georgy Lobushkin said his company won't be participating in such a “farce.”

Without making any concrete promises, Lobushkin said Vkontakte would consider building its own monument to Jobs.

This story by Kevin Rothrock was originally published by our partner Global Voices Online, a community of bloggers from around the world.