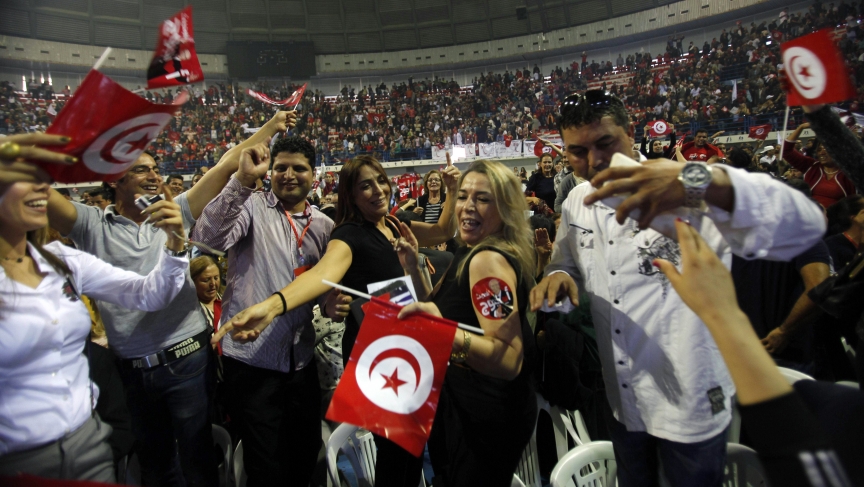 The anthem for an election rally in downtown Tunis is a mash-up of a rap about democracy, an old Arabic standard and Tracy Chapman’s “Talkin 'Bout a Revolution."

He doesn't shy away from talking about his age. In fact, you might even say he’s playing the age card. “I’m too old to turn into a dictator now! No one becomes a monster at my age," he says.

If he's not a monster, though, he's certainly a dinosaur of Tunisian politics. “He’s seen it all since Tunisia’s independence,” says the 20-year-old student sitting next to me at the rally. But voters seem to like that about it. “He must have learned all the lessons.”

Essebsi was Tunisia’s interior minister in the 1960s and its foreign minister in the '80s. Right after the revolution, he served as prime minister and organized Tunisia’s first free elections. He now leads the secular coalition that won control of parliament last month from Ennahda, the moderate Islamist party that swept elections in 2011.

Monica Marks, a Tunisia analyst from Oxford University, says Essebsi is winning Tunisians over by strumming on very familiar chords.

“He’s offering a kind of paternalistic, big man approach to politics,” she says. “[Essebsi is a] highly charismatic personal leader who says to the people, ‘I offer you safety and security, I’m offering you state prestige. If you invest trust in us, the old political elite, the statesmen, we are going to solve your problems.’”

Listening to Essebsi's fiery speech at the rally, Radhouana Addala says everything about Essebsi is reminiscent of Habib Bourguiba, the man credited with throwing off French rule and creating an independent Tunisia — until he was ousted by his own prime minister in 1987.

“That’s the style of the speeches of Bourguiba, which is mixing between joking, plus Tunisian dialect, plus verses of Koran,” Addala says. “He’s kind of talking to the [sub]consciousness of people because Bourguiba is the first politician of the country — he’s the reference.”

Monica Marks says that's shrewd politicking, since the former leader is seen as a hero by many — young and old.

“This was an anti-colonialist. This was a man who’d been active against the French, but took us forward," she explains. "He didn’t completely disavow European culture. He was a person who took us forward in a very sophisticated, Tunisian, moderate, sophisticated way and so young people have grown up ingesting this personality cult.”

That's not the case for 31-year-old Azyz Amami, a prominent activist and one of the leading figures of the revolution. He says Essebsi is no different from the two men who have ruled Tunisia since independence.

Amami thinks Essebsi represents a throwback to old regime-style politics, where a handful of elite Tunisians ran roughshod over the country. He instead supports a leftist candidate with a strong social agenda, saying inequalities and unemployment were the root cause of the unrest and must be a top priority now.

“We’ve never all lived in the same country. I grew up in working-class neighborhoods and in the countryside,” Amami says. “And I understand very well why all these young people from upscale parts of Tunis and the coast support Essebsi. ... The old elite lost its grip. ... It’s normal that they are nostalgic of a time when they were entitled to power and wealth.”

But there are young people supporting Essebsi who are looking forward, not back to a time of privilege. Sabrine Goubantini was a militant in a student union, but says she figured it was time to step up and change things from inside the system.

Goubantini, a member of Essebsi's Nidaa Tounes party, became one of the three youngest people elected to parliament in last month's elections. She says Essebsi, despite his age, is the only politician who's not just paying lip service to the country's youth.

Goubantini will take office in a few weeks, and hopes Essebsi will be president by then. In the meantime, she's taken leave from her accounting job.