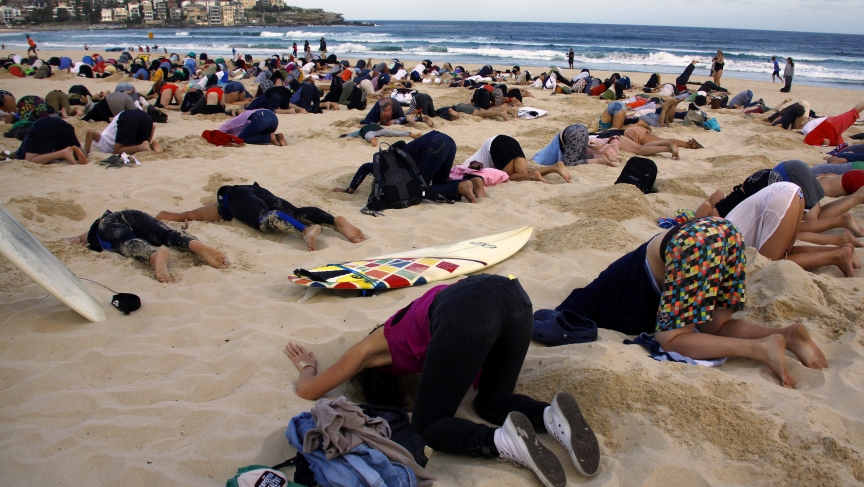 A group of around 400 demonstrators participate in a protest over climate change by burying their heads in the sand at Sydney's Bondi Beach November 13, 2014.

The meeting came just days after US President Barack Obama and Chinese President Xi Jinping announced a deal on climate change that raised hopes for a comprehensive international deal next year. But that agreement didn't influence protesters in Australia, who say their country's prime minister, Tony Abbott, has his head in the sand over climate change.

According to the Independent, they're particularly incensed that Abbott has refused to put climate change on the G20 agenda. About 400 men and women participated in the protest this week.

Zambia hopes to diversify its economy — with marijuana

Zambia's economy is dependent on mining and exporting copper — an industry that is not only unpredictable but also extremely highly polluting. But Green Party presidential candidate Peter Sinkamba has a plan to clean up his country, and diversify the economy at the same time, by phasing out mining and starting commercial farming of marijuana in a bid to bolster the country's agriculture sector. The pot would be used medicinally within Zambia, with any excess crop exported overseas, according to The Guardian.

First, he would have to legalize medical marijuana in Zambia, which would make it the first country on the continent to do so. Further complicating matters, there are international treaties that prevent drug exports. But Sinkamba is pressing ahead anyway.

These girls will do anything to get the education they deserve

India is still trying to develop an education system that serves all of the country's children. Oftentimes, girls wind up never going to school, or at least not for very long. But as Indian girls begin to realize what an education can do for them — and that they're entitled to one — they're stepping up and insisting they be given all the opportunities that an education can provide.

PRI's America Abroad introduced us to Khushboo Rawat, a 21-year-old Indian woman who had to fight to stay in school. When her father tried to marry her off at a young age, she refused. He beat her into unconsciousness and then kicked her out of the house, but she stayed at it. Now she's an example of how an education can open up whole new worlds for young women.

American Suki Kim went to North Korea as a teacher and was assigned to the Pyongyang University of Science and Technology. It could charitably be called a school, but bore remarkable similarities to a prison. There were armed guards that kept the students in and the city out. The teachers could only teach lessons and books approved by North Korean minders. The 270 male students had to be careful not to betray any questionable thoughts and the teachers had to toe the line, as well.

But the year Kim spent at Pyongyang University of Science and Technology was a year of change in North Korea. All the rest of the country's universities had been shut down, and this one was left open. It welcomed the children of the country's elite — and kept them from being sent out to do construction like the rest of their fellow students at other universities. Kim's essay appears in Foreign Affairs.

Here's your chance to own Napoleon's hat

The kingdom of Monaco has been home to artifacts from Napoleon's campaigns across Europe centuries ago. But now that the king's palace needs a little bit of a facelift, Prince Albert decided to put some of those artifacts up for auction. PRI's The World talked to auctioneer Arnaud de Gouvion Saint-Cyr about the items on the block.

Perhaps the most impressive artifact is one of Napoleon's famed two-corner hats. It's expected to fetch as much as $500,000 at auction. Also on the block is a knife expected to be worth at least $15,000 and a French Imperial Eagle standard with bullet holes in it. All told, some 1,000 artifacts will go on auction in Paris.

Indian women who died after sterilization were given antibiotics laced with rat poison, @EllenBarryNYT reports. http://t.co/9AdowWAL0q

Fuyuan County, China, endured 48 hours of snow this week, which brought the community in northeast China to a halt, according to the BBC. Flights were canceled, bus service suspended and life was interrupted for residents.