Older students at Prerna School, which was built for girls from poor and uneducated families. It helps girls who had missed out on schooling to make up, and engages with the students’ families to discourage child marriage.

India is hardly the place that comes to mind when you think of places that have made strides in girls’ education. Headlines are filled with stories of how badly the country treats its girls and women.

Violence against women is on the rise. About 50 percent of Indian girls are married off before the age of 18. And selective abortion of female fetuses has led to a dramatic drop in the ratio of females to males.

And yet, the number of girls attending schools in India has gone up in recent decades, especially in primary schools. This is true even in rural areas. This is not to say that keep those girls in school is easy, especially if they’re poor. But things are changing slowly.

And more and more, girls and women are fighting for their right to education, like 21 year-old Khushboo Rawat. She was born in a poor family in the eastern Indian city of Lucknow. Her childhood was filled with drudgery. 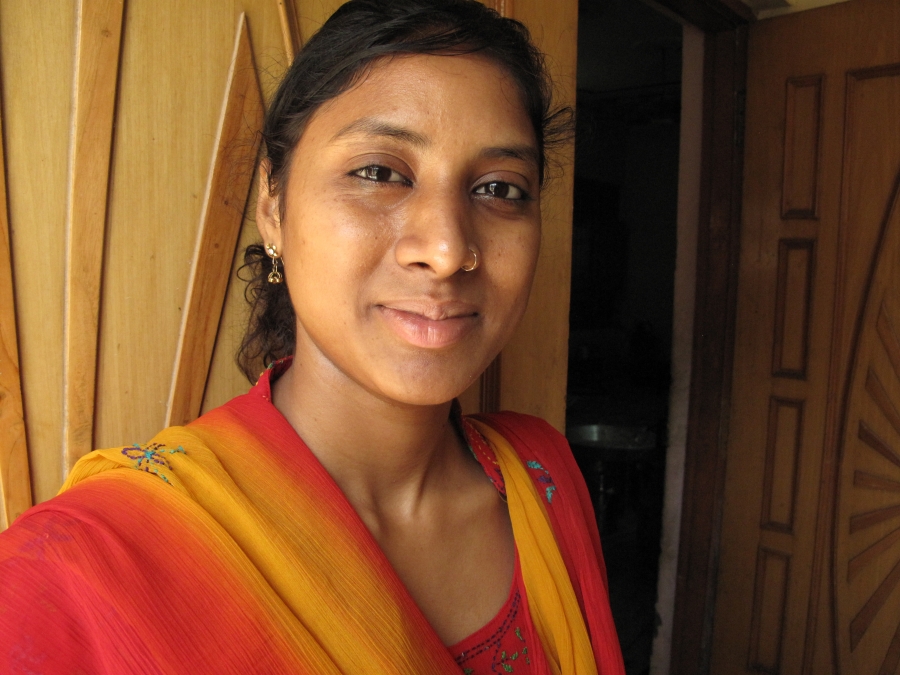 Khushboo Rawat, 21 lives in Lucknow and is pursuing an undergraduate degree. She’s the first woman in her family to go to college.

Rawat’s mother died when she was just 2. Her father remarried, but her stepmother died too, leaving in her care two half-siblings who were still toddlers. That’s when Rawat’s father took to drinking too much. And she had to clean the house, cook food for everyone and look after her half siblings.

“I’d cry by myself out of anger,” Rawat says. “Sometimes, when I was cooking, I’d feel like burning myself so I didn’t have to work anymore.”

That’s why she dropped out of school in second grade. “Because I couldn’t study anymore,” she says. But thanks to a special school that opened up near her house in 2013, she was able to return to school. That school is called Prerna. As she visits the school on one evening recently, she reminisces on the good times she spent here. “When I’d leave home every day and come here, I’d feel happy,” she says.

Standing at the back of the school, she points to a mango tree, where a group of girls in red tunics are standing. It’s a tree she and her friends, climbed often. “That’s the tree we had a lot of fun on,” she says.

Primary school students at Prerna School, Lucknow, where Rawat used to study. Girls at the school belong to poor and uneducated families. Many girls who come here have jobs, while others help their mothers with house work.

The school allowed her to make up for years of schooling she had missed out on. And she loved learning to read again. Urvashi Sahni, who founded Prerna, says girls from poor and uneducated families, like Rawat, have it the worst. Educating them is not a priority for their families. As a result, they are often restricted to laboring inside the house and are married off as teenagers. That is why Prerna also fights early marriage by empowering girls to question patriarchy.

“What led me to start Prerna was really a faith that education was the answer to girls’ problems,” Sahni says. “It is to help them emerge as women and to help see themselves as equal, autonomous persons who are worthy of respect and to participate equally in an unequal society. 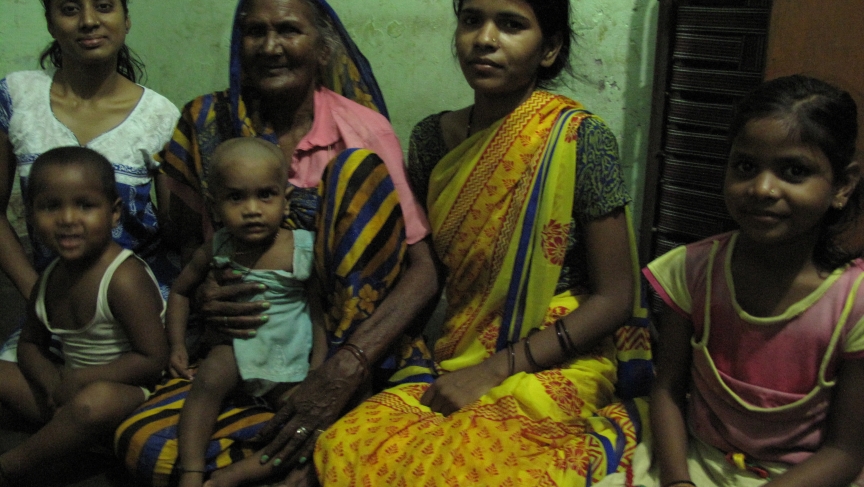 The impact of that education is evident for Rawat, who excelled at Prerna. In 2010, at the age of 14, she received a scholarship to go to London to participate in a drama workshop. But that didn’t sit well with Rawat’s father and her new step mother. They had other plans for her: It was time for her to leave school and get married. But Rawat resisted, because she wanted to continue her education. Besides, marriage at that age would break a contract her father had signed with the school, saying he wouldn’t marry her off till she finished high school.

Sahni remembers trying to persuade Rawat’s father to let her stay at school. After all, his daughter was an ace student. “I said she only wants to study, why won’t you let her?” Sahni says. “He said ‘No, I’m just about done with this. You’ve sown the seeds of rebellion. And I don’t want her to study anymore.’”

He ignored the issue of the contract, and insisted that education has made his daughter disrespectful and defiant.

Meanwhile, Sahni says his daughter stood at the back of the room, repeating one thing: I want to study, I want to study. “I thought wow, isn’t she scared of him? Because I’m getting scared of this dad,” she says. “He said ‘I have kerosene oil at home, and I’ve told her she should just burn herself.’ I was so shocked that I said ‘Sir, that’s murder!’ He said ‘come on! You pay 50,000 and nobody cares.’”

Fifty thousand rupees, or about $800 to hush up a girl’s death. With that, Rawat’s father took his daughter home. The next day Sahni received terrible news. “That night he beat her up really badly,” she says. He hit her with an iron rod.

“My whole body was black and blue,” Rawat recalls. “The next day, when I gained consciousness, I realized that he’d beat me so badly I’d soiled my own clothes. I sometimes feel that if I hadn’t gained consciousness, he might have burned me alive. Because he was convinced nobody could touch him.”

As soon as this news reached her, Sahni showed up at Rawat’s house with the police. The police told him he could go to jail if he beat his daughter again, and if he married her off before she turned 18. He listened, livid at his daughter and Sahni. As soon as the police left, he threw his eldest daughter out of the house.

“After the Khushboo case, we discussed it at Prerna among our students,” says Sahni. “You know what they said? It’s a very telling statement: They just looked, shrugged their shoulders and just said you know this happens all the time.”

Most of the time, such violence does the job of silencing girls into submission. And Rawat might have caved too, or might have taken her own life, had it not been for the support she got from her teachers, especially Sahni.

“One thing Auntie (Sahni) had taught me is that I’m not so weak that I should die,” says Rawat. She had also taught her that girls are no less than boys or men. She thinks back of the time when her father beat her up. “If he can treat me like this, being my own father, so why can’t I turn around and stand up to him?” 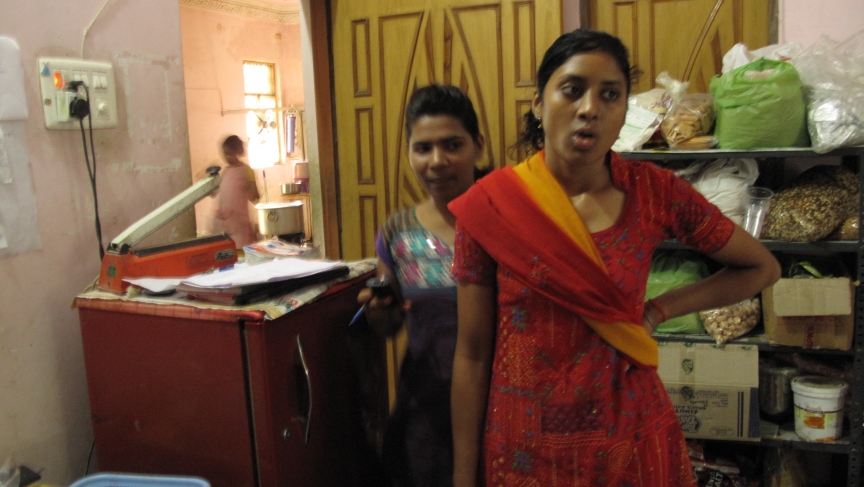 Rawat at her workplace, stopping for a moment to breathe. She works full time at a lunch supply company, managing their pantry and keeping accounts. At 21, she’s paying for her own education and her grandmother’s health care.

After Rawat’s father threw her out, her grandmother took her in. She has since graduated high school with honors and is currently pursuing a college degree. Still, life is a grind. She is working full time for a busy lunch supply company, managing their pantry.

When I visit Rawat at work one morning, she’s juggling orders from several cooks. One woman wants spices. Another wants rice and someone else, lentils, or oil. They nag Rawat to hurry up. She is quick on her feet, efficient, although sometimes flustered when work pressure goes up.

Rawat seems well on her way to being an economically independent woman. But she isn’t so sure about it.

“The pressure at work is so high, that I’m unable to do everything in a day,” she says. “I go home late, I don’t have time to study and I can’t give my family enough time.”

To her, the future feels uncertain. “If I can’t focus enough on my studies, how will I do anything in life?” she says. Yet, to teachers at Prerna, Rawat is a success story, proof that with the right kind of education and moral support, girls can stand up against patriarchy. And indeed, Rawat and her generation of students at Prerna might have had it the worst, because they were the first generation in their families to pursue this kind of life.

Teachers at Prerna say parents are starting to realize that educating their girls is valuable.

Even in Rawat’s family, things have changed, albeit grudgingly.

Soni Rawat is Khushboo Rawat’s 15-year-old half sister. She says sometimes, when her father is angry, he threatens to take her out of school. “If we make mistakes, he says I’ll stop your education, only then will you behave,” she says. “But he hasn’t done that yet, she says. In fact, five of her half-siblings, all her step mother’s daughters go to school at Prerna. Four years ago, she says, her father began to make noises about getting her married soon. “But, he hasn’t acted upon it yet, she says, so I haven’t paid heed to his threats.”

“What if your father DOES start insisting you get married,” I ask Soni. ”What will you do then”

“I’ll do exactly what my sister did,” she replies. “I won’t get married.”