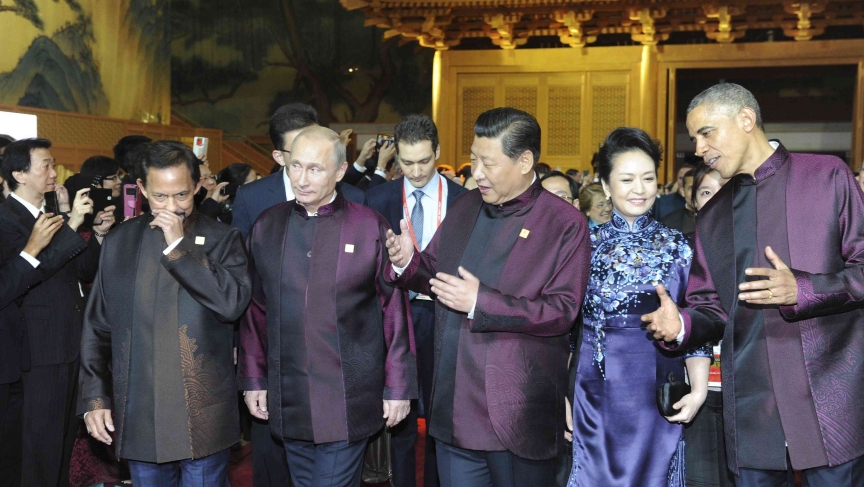 In 1993, Bill Clinton gave leather jackets to fellow world leaders when he hosted the Asia-Pacific Economic Cooperation, or APEC, summit. A year later, Indonesia's leader handed out batik shirts to his guests. A tradition was born. Now, 20 years later, Beijing is the host and asked leaders to don matching purple and black silk shirts.

But the matching shirt photo isn't without its detractors. Japan declined to offer kimonos or other traditional garb when it hosted in 1995 and 2010. President Barack Obama tried to get rid of the tradition when he hosted leaders in Hawaii in 2011, opting instead for "business attire" in the group photo. Russia also went with business attire when it hosted in 2012.

The Washington Post has a photo gallery of world leaders in matching outfits — you decide if it is one of those traditions that is better left behind.

It was 1983 when the US suddenly invaded the small Caribbean island of Grenada to overturn a revolutionary socialist government. The world community reacted with outrage — especially the British, the former colonial master of the island. Britian was a key ally of the US and was in the dark on the operation.

So when President Ronald Reagan placed a phone call to British Prime Minister Margaret Thatcher a day later, things were a bit tense. Now that call has been made public.

Reagan apologized, blamed his need to keep the operation secret from allies like Thatcher on his own concerns over American officials leaking the plans, and ending by exchanging pleasantries about family and joking about life in politics. According to The Independent, Reagan and Thatcher enjoyed one of the closest relationships of any US and UK leaders — even in crisis.

A John Steinbeck story on racism gets published 70 years later

Many see John Steinbeck as ahead of his time. He took on themes and issues few of his contemporaries would. That has given his works, like The Grapes of Wrath and Of Mice and Men, incredible staying power. But one Steinbeck story may have been a bit too far ahead — and is only being published now.

"With Your Wings" was read aloud on a variety show in 1944. It reflects how African-American soldiers were treated during World War II, which may explain why it was not published at the time. PRI's The Takeaway looks at how the story fits with Steinbeck's aim to help his readers walk in the shoes of those marginalized in society. It may come off as a bit romantic today, but 70 years of civil rights has elapsed since it was written.

Millions of Catalans cast a symbolic vote for independence from Spain

On Sunday, many in Spain's Catalan minority cast ballots in an informal independence vote. Of the more than 2 million votes cast, polls indicate that about 80 percent were in favor of independence — though Catalans opposed to independence boycotted the vote, making it hard to interpret the result.

Perhaps most significant is the fact that the vote occurred. Spain's government initially said it would not allow it and dismissed it as a public relations effort. Catalans have been lobbying for a real referendum that would be similar to Scotland's recent (unsuccessful) vote for independence.

According to The Guardian, volunteers staffed the polling sites and registered voters on the spot. About 5.4 million Catalans were eligible to cast ballots. Organizers hope the large turnout will force Spanish officials to at least grant increased autonomy to the Catalan region, if not a true referendum.

These are the faces behind Syria's refugee children

Refugees of Syria's civil war are in the millions. It is often hard to think of them as people, with hopes and dreams and daily lives. Photographer Rania Matar wanted to give them their identities back.

So Matar photographed refugee children who had fled to her home town of Beirut in Lebanon, which neighbors Syria. Kids haunt the streets there begging or selling Kleenex or gum or shoe shines to make money for their families.

PRI's The World has a gallery of Matar's photos and talked to Matar, who says "I decided to photograph each kid on his own and give him or her back her dignity in some way."

Don't look down - the view below Tower Bridge from its new glass-bottomed walkway http://t.co/BQ9IhWKO25 pic.twitter.com/Gw55USdnZo

Chinese officials unleashed a full court press to cut pollution in Beijing ahead of this week's APEC meeting of world leaders, hosted by Chinese President Xi Jinping. Officials shut factories, implemented alternate day driving, outlawed ceremonial burning and ordered deliveries to only occur between midnight and 3 am. Unfortunately, none of that worked, according to The Guardian. So, Chinese officials implemented a new strategy: barring access to US Embassy data on air pollution.

According to the Embassy's own website, where the data is still available, pollution levels were more than six times the maximum recommended World Health Organization level - that's quite unhealthy. Official Chinese sources claim the level is just a third as high.