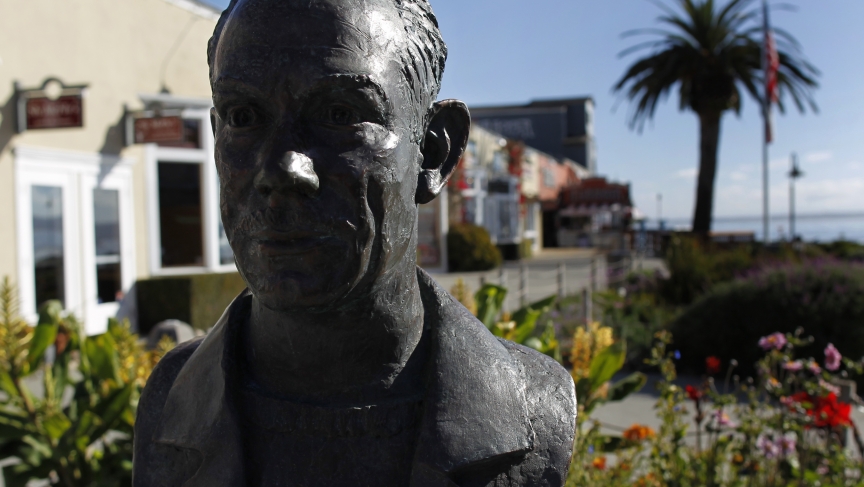 The bust of American writer John Steinbeck is seen on Cannery Row in Monterey, California, September 4, 2013.

A lost story by literary great John Steinbeck was published for the first time last week in The Strand magazine.

The story, called "With Your Wings," was originally read on an Orson Welles variety show sometime around 1944, but was soon forgotten. Andrew Gulli, managing editor of The Strand magazine, found the story while combing through the University of Texas Library.

Those themes can be seen in “With Your Wings.” The story focuses on a young African American soldier who is coming back to his hometown after training to be an Air Force pilot.

The first line of the story reads: "He knew most of all that he wanted to go home — that there was something at home he had to get, and he didn't even know what that was."

“With Your Wings” reflects the racial politics of the era. During that time, black soldiers were largely marginalized by different aspects of society.

“This was a time where African American soldiers were not treated very well,” says Gulli. “They were not allowed to worship in the same chapels where white soldiers worshipped, and they were separated in their eating quarters. Steinbeck, I think, was trying to give a very powerful message ... this might have been a faint cry to say that perhaps the US Army and a lot of states should have passed laws to treat these people better.”

Though some might argue that “With Your Wings” is romanticized, or softens the racial politics of the time, Gulli says Steinbeck might have felt that the readers of the era were not ready for a “hard-hitting” portrait of military segregation.

“I think that this was John Steinbeck’s way of trying to show something in a sentimentalized way, with a hope that it would bring some understanding among people who were perhaps bigoted or not as progressive as he was,” Gulli says.

In many ways, this early Steinbeck work fits perfectly within the context of his larger career.

“The reason I think Steinbeck has resonated with people for the last 70 years is that he’s able to have all of his readers walk inside the shoes of another person,” Gulli explains. “Be it an impoverished farmer during the Dust Bowl, or a young African American soldier who’s trying to come to terms with the fact that he’s feeling a huge weight of expectation on his shoulders.”

Gulli adds that this Steinbeck piece is representative of the larger beliefs the author has held throughout his life.

“He came to see the United States as a country where excess was killing us,” he says. “He had hoped that the civil rights movement would have progressed quicker. And he was frustrated about how, in the South, black children were being harassed when they were going to school.”