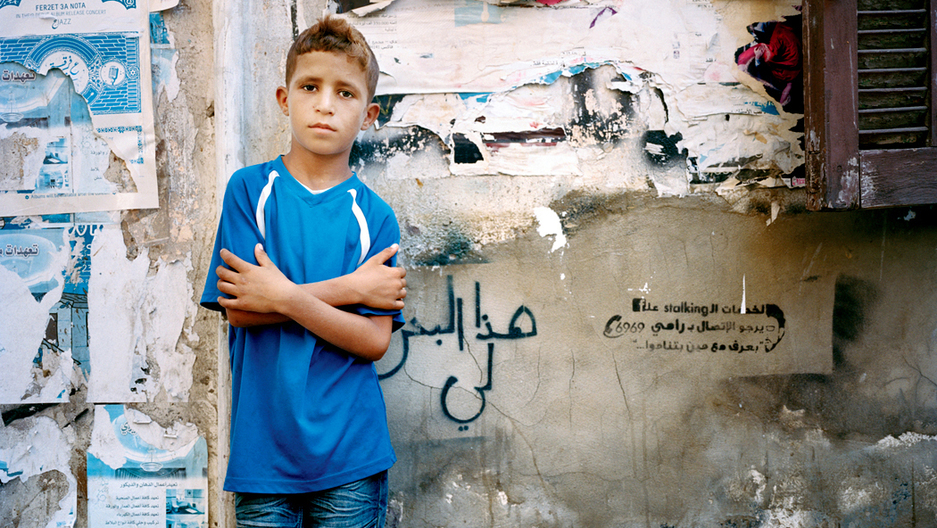 When people use the term "Syrian refugees," it conjures up a huge, faceless stream of people fleeing violence and struggling to make a living. Rania Matar, a photographer from Beirut, wants to give those refugees their identities back.

Matar says the way we usually talk about such people puts them into an unidentifiable mass, making them "invisible" as people. That's no different in Beirut itself, where Syrian children wait on many streets to beg for money or the chance to shine a passerby's shoes, usually ignored as simply one more of the refugee crowd.

Matar wanted to break away from that and give each child his own individual identity back. "I decided to photograph each kid on his own and give him or her back her dignity in some way," she says. That's how the streets of Beirut became the backdrop for Matar's latest photographic project called "Invisible Children."

Matar's subjects are young Syrian refugees who have fled the civil war in their country, taking refuge in neighboring Lebanon. They work — and sometimes live — on the streets, selling Kleenex or gum or shoe shines for a small amount of money. "It seems like they've lost their childhood," she says.

Lebanon is struggling with its own economic and development problems, so people there have mixed feelings about these children and their families. That's why a lot of the children were reluctant to share personal details about their lives or even give out their names, Matar says: "They're scared."

Matar gives the example of a 14-year-old boy, named either Mohamed or Khaled — she's not sure which one is his real name. He was carrying shoe shining equipment when Matar met him; he looked sad and hopeless. He told Matar he had escaped his home in Aleppo and was now staying with relatives, but he wouldn't say more.

As a mother, Matar says this project moved her deeply. "I have a 14-year-old son," she says, "and when I started talking to him, all I could think about was that this could be my own child."

She says it's heart-wrenching to think that the children are grappling with a challenging life and facing an uncertain future. "But this is the scary part," she says, "nobody knows what their future is."