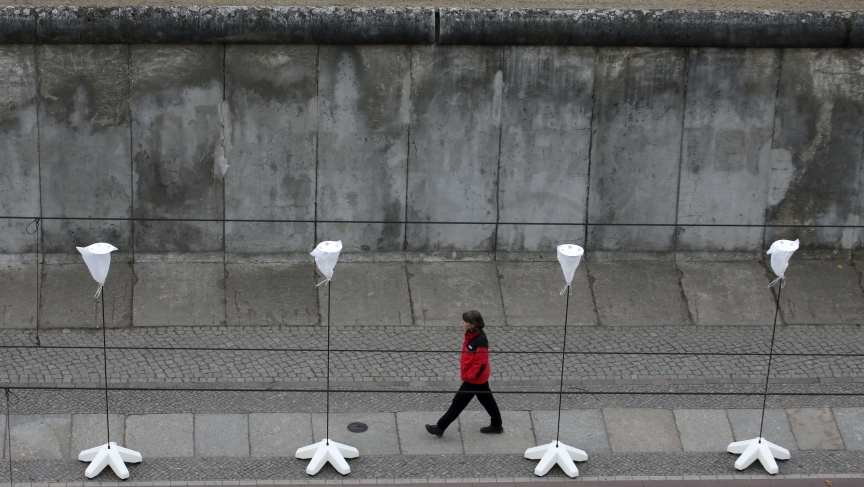 A part of the inner city of Berlin will be temporarily divided from November 7 to 9, 2014, with a light installation featuring 8,000 luminous white balloons to commemorate the 25th anniversary of the fall of the Berlin Wall. Here a woman walks in front of balloon stands on Bernauer Strasse.

It's now been 25 years since the fall of the Berlin Wall, but we're still discovering new things about that period in history.

For example, I learned this week that communist East Germany actually sold its political prisoners — and their relatives — to West Germany for many years.

"They were very short on money — they were asset-stripped by the Russians," explains Gavin Haines, a freelance journalist who wrote about the prisoner sales for the BBC. "So they thought, 'Well, we have these prisoners. We don't have any money. Let's ransom them across.'"

"Figures do vary, but between 1964 and 1989 there were approximately 33,700 political prisoners that were sold," Haines says. "In addition to that, they obviously had lots of family members. So there was an additional 250,000 people who were sold."

It's a huge number. German media wrote about the practice, but few people in the English-speaking world knew about it until Haines' article came out. He says both sides, East and West, weren't interested in having the story come out. Why? It makes both countries look terrible.

"They went to great lengths to keep this trade a secret," Haine explains. From the East Germans' point of view, obviously it looked desperate. It looked like the state was failing — which it was. And they didn't want it to be publicized, and they didn't want to be seen as being propped up by West Germany.

And of course, he says, "West Germany didn't want to be seen propping up a communist country."

So they traded people for cash and goods — thousands upon thousands of people. But Gavin says that during the course of reporting the story he didn't find any remorse among the Germans. It was simply a pragmatic move, given the dire circumstances.