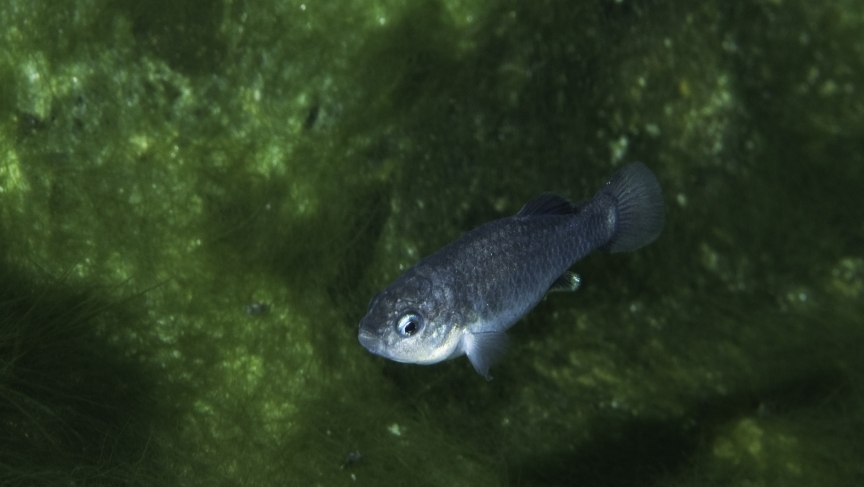 The Devils Hole pupfish is the multimillion dollar fish, quite literally.

What should we spend to save a little fish that has been trapped in a hole in the middle of the Mojave desert for about 50,000 years? We're talking about the Devils Hole pupfish and there are fewer than 100 of them left in that hole.

The US government, just last year, spent $4.5 million to open the Ash Meadows Desert Fish Conservation Facility, with a 100,000-gallon tank designed to replicate the odd conditions of the pupfish natural habitat. The plan is to use the facility to keep alive a separate population of the Devils Hole pupfish in case the natural population dies off as their hole heats up from climate change.

Now, you may well have heard of these fish, since they became celebrities a few decades ago when they were at the center of a Supreme Court decision affirming the Endangered Species Act. The magazine onEarth, from the Natural Resources Defense Council, looks at the long debate over whether it is worth all the effort to save these isolated remnants of the past.

Can your 3D printer make a body part?

3D printers are becoming more and more popular, especially among hobbyists and inventors who like to create new things. And a British researcher recently had a handy idea. Joel Gibbard used a 3D printer to make a bionic hand for a 23-year-old British man who was born without a right hand.

According to The Telegraph, Gibbard created the hand in two days and at a cost of just $481 after scanning the actual left hand of Daniel Melville. Melville said the bionic right hand fit "like a glove." Gibbard is already making improvements, cutting the weight in half. He hopes to have his approach in the market sometime next year.

Six seconds after the Antares rocket launched from the US East Coast on Wednesday, it exploded in a flash of fire and debris. The explosion destroyed 5,000 pounds of supplies and gear meant for the International Space Station, or ISS. But that wasn't all that was destroyed. Budding young student scientists watched as their space experiments disappeared in the explosion.

One of the student groups who had developed projects for the ISS came from McGowan Park Elementary in British Columbia, Canada. PRI's The World talked to a teacher there who had gathered her students around a TV to watch live video of the rocket lifting off. Were they disappointed? Sure. But, hey, it is science after all, and they are going back to the drawing board.

The Danish parliament Wednesday held a hearing to consider whether the country will become the latest to impose restrictions on male circumcision — an issue that has come up more often in recent years, especially in Europe. The argument goes that there is no medical reason for the procedure and so it shouldn't be done.

According to the Independent, three-quarters of all Danes support a ban on male circumcision. Two Danish political parties from opposite sides of the aisle are both supporting the legislation that would ban the practice. Between 1,000 and 2,000 circumcisions were performed in Denmark last year, out of about 25,000 male births. The practice is important to Jews and Muslims, who have opposed similar bans in other countries. It's not known if a new law in Denmark would allow any exceptions.

Think twice before you bite into that Halloween licorice

With Halloween around the corner, homes throughout the US are likely to become decidedly sweeter in the coming days. But before you or your kids bite into a piece of black licorice or some other candy made largely from molasses, consider the danger. You might be biting into food tainted with lead, a neurotoxin that can damage the brain, especially in children.

The US Food and Drug Administration recommends a maximum lead level of 0.1 parts per million in candy. And there have been ample examples of candy exceeding that standard. PRI's Living on Earth reports that the Center for Environmental Health recently reached an agreement with select retailers and manufacturers to bring lead levels in candy down to below .035 parts per million, but that agreement doesn't come into effect until December.

PUBLIC SERVICE ANNOUNCEMENT: If you're gonna dress up like ISIS for Halloween..They will use your dumb Instagram photos as recruitment tool.

About 100 people in Sri Lanka are believed to have died after heavy monsoon rains led to landslides on Wednesday. A massive search and recovery effort is underway right now, but bad weather has hampered the operation, according to the BBC.