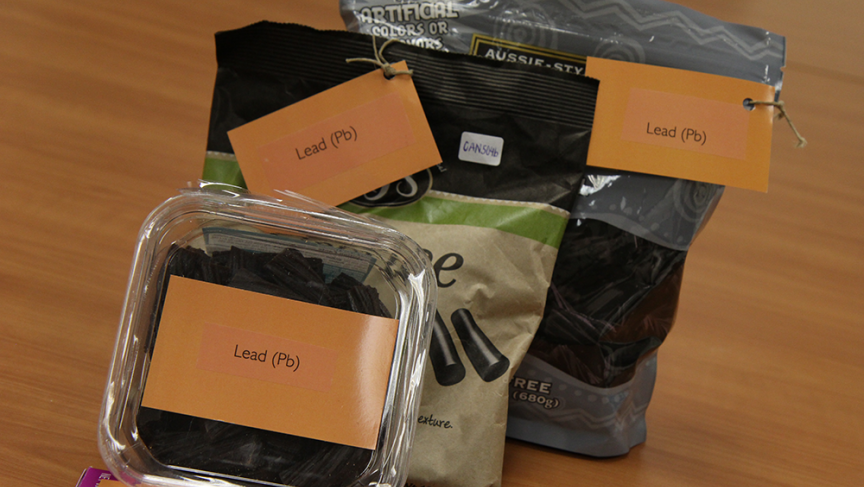 The Center for Environmental Health sued candy makers and retailers for unacceptable levels of lead contamination in black licorice.
Credit:

It’s almost Halloween, and millions of kids will be out trick-or-treating. Anxious parents may worry that their kids will get cavities or eat too much sugar, but right now there’s another more potent risk: traces of the powerful neurotoxin lead that can be found in licorice.

“Lead is what I like to call a stunningly toxic metal,” says Caroline Cox, research director at the Center for Environmental Health. Cumulative exposure to lead can affect the developing brain and cause learning problems in young children. “They’re going to get lower grades, they’re going to have more behavior problems — and that damage to the brain is essentially permanent."

Her warning is supported by many years of research, which is why lead is no longer found in products like paint and gasoline. But, remarkably, the government currently doesn’t require companies to test all the ingredients they put into candy.

This is not a new problem. In 2012, the California Department of Health issued a recall for some brands of licorice due to unsafe amounts of lead. But earlier this year, Jelly Belly, and other candy manufacturers, like Trader Joe’s and Panda, got a notice of violation for once again having too much lead in their candy. The Center for Environmental Health found elevated levels of lead in their licorice.

The Food and Drug Administration recommends a maximum lead level of 0.1 parts per million in candy. That may sound minuscule, but even a tiny amount can make you sick.

And lead is not just a concern for consumers. It’s also a big problem for the candy industry. Laura Shumow, the director of scientific and regulatory affairs at the National Confectioners Association — i.e. the Candy Lobby, with its 600 member companies — says companies are aware of the problem. They are investigating their own manufacturing processes and their own supply chain to understand the sourcing of these ingredients in order to make the risk as low as possible, Shumow says.

Ten years ago, one of the ingredients that came under fire was lead-tainted chili powder on spicy Mexican sweets. Now the culprit is the lead in molasses, which is one of the main ingredients in traditional black licorice. Sometimes this lead is the result of pollutants in the soil, or agricultural products like pesticide, which can contaminate sugar cane that is used to make molasses — and once that lead gets in, it’s hard to get out.

“There aren't very many mitigation techniques to take lead out of an ingredient once it has been exposed,” Shumow says. “So in order to ensure that the food supply has very safe levels, what manufacturers need to do is to monitor their ingredients and to test their ingredients and see that those levels are meeting regulatory standards.”

The Center for Environmental Health finalized a settlement recently, but many of the retailers and candy makers named in the suit have already agreed to pay fines and bring down lead levels in all the licorice candies they sell to below .035 parts per million by December.

That may seem like a day late and a dollar short — but at least the candy you buy for Christmas may be a bit safer.

This story was reported for Youth Radio by Rafael Johns and edited by Ike Sriskandarajah. It originally aired on PRI's Living on Earth with Steve Curwood.