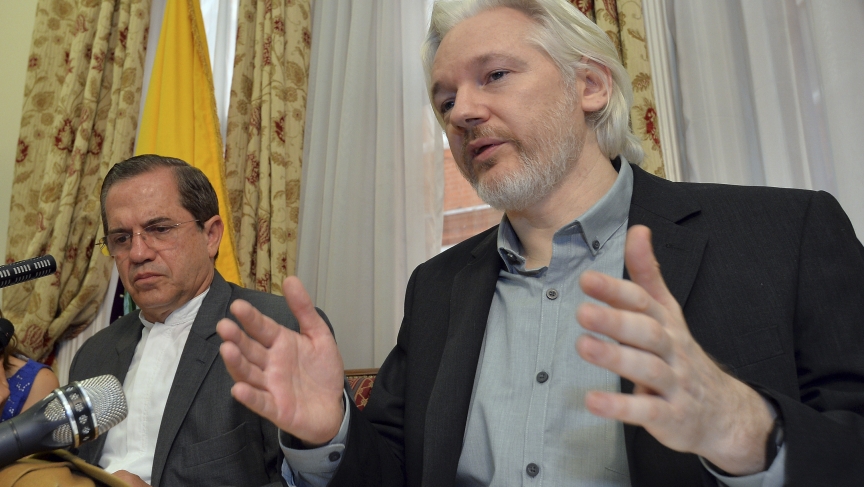 Julian Assange remains holed up in London, safe from criminal extradition because he has sanctuary within Ecuador's embassy there. Still, he is doing his best to stay on people's minds. Or if not on their minds, at least on their chests.

Assange is taking a page from Latin American icon Che Guevara, whose face is ubiquitous on T-shirts worn by revolutionaries. Assange has reportedly reached agreements with manufacturers in India, France, Germany, Austria, Spain, Portugal and Switzerland to sell his new line of WikiLeaks-inspired clothing, featuring his image. According to The Independent, the goal is to raise funds for WikiLeaks, which relies largely on donations.

Happy clowns are fighting back against scary clowns

Most people have nice memories of seeing or meeting a clown. Perhaps one even made you a balloon animal. But some people suffer from coulrophobia, or fear of clowns. And a long line of killer clowns in pop culture is not helping.

The latest season of American Horror Story is one example. It debuted recently with a terrifying, serial-killing clown named Twisty. That angered the group Clowns of America International. (And angry clowns don't help the image, either.) The group is lobbying against "any medium that sensationalizes or adds to ... ‘clown fear.'"

According to Salon, the president of the group told Hollywood Reporter that the entertainment industry, in its bid to make money, "can take any situation no matter how good or pure and turn it into a nightmare.” He is fighting all moves that throw gasoline on the ever-burning fire of "clown fear" in America.

The Ebola outbreak was back in US news on Wednesday, with another healthcare professional in Dallas diagnosed with the disease. And this time, there was a new wrinkle: the nurse had flown back from Ohio on a commercial airliner before being admitted to the hospital. That prompted many to wonder if the woman's fellow passengers were at risk.

That was just one issue on people's minds this week, when we asked people to send us their questions. What about sexual transmission of Ebola? Can it be passed through sweat? And can Ebola survive in Minnesota? PRI's The World talked to Dr. Emmanuel d'Harcourt to get answers. If you have any Ebola questions, leave them in the comments and PRI's The World will work to get them answered.

That Canadian dollar? It's a bargain these days

Canadians had enjoyed a record run of virtual parity between the US dollar and the Canadian dollar, making American goods more affordable for them and Canadian goods more expensive for Americans. But that parity has eroded recently. And on Wednesday, it reached a new five-year low. One Canadian dollar is now worth just 88 US cents.

According to the Globe and Mail in Toronto, Wednesday's new low comes as the price of a barrel of oil falls. Canada's economy has become increasingly intertwined with oil — now that fracking and extracting oil from tar sands has increased the country's supply and exports. The loonie, as the Canadian dollar is called, is expected to continue to lag the greenback. Dropping oil prices means the Canadian economy will also lag behind the US economy.

Serbia and Albania haven't met on the soccer pitch in more than 60 years, so their match this week was already going to be a big deal. But it didn't turn out the way anyone expected. In fact, the game never ended.

Incensed Serbian players ripped the flag down. Then, Albanian players attacked the Serbian players and the brawl was on. Next, the fans got involved. Then security guards reportedly contributed to the violence, too, rather than trying to end it. PRI's The World reports on the incident and how, in the fractious Balkans, sports — especially soccer — are prone to the ethnic and nationalist tensions that have led to several wars over the years.

The northeast US and eastern Canada are enjoying one last jolt of late summer weather, with temperatures in the mid to upper 70s from New York to Boston to Montreal. According to AccuWeather, Montreal topped out at 75 on Tuesday, compared to a typical high of 55. Similar temperatures were forecast for Wednesday.