After 40 minutes of play between historic rivals Serbia and Albania, there was still no score in their qualifying match for the 2016 European soccer championship. But plenty of action erupted in the 41st.

Actually, a small drone appeared over Belgrade's Partizan Stadium, trailing a banner behind it. It showed a map of "Greater Albania" — not the actual country but an aspirational one that includes all of the areas of the Balkans where ethnic Albanians live.

Serbians have never taken kindly to that idea, and the Serbian players were no different. They pulled down the flag, while the Albanian players tried to protect it. That turned into a fight between the two teams, and then a "surreal melee" as Serbian fans rushed the field to attack the Albanian team.

As Julian Borger wrote on Wednesday in The Guardian, "In the Balkans, more than anywhere else, football is the continuation of war by other means."

Borger explains that "Greater Albania" is a charged issue for Serbians, because it would take away part of what Serbia considers its own land. "Albania's greater territorial ambitions include Kosovo, which Serbia also has an historic claim to, and parts of Macedonia," he says.

Believe it or not, the match was also the first meeting on the field since Serbians and ethnic Albanians fought an actual war in Kosovo in the late 1990s. "These two countries haven't played each other in more than 60 years," Borger says, "and Kosovo is still a really emotive hot button issue here."

And add to that the fact that many Serbian fans, who call themselves Ultras, are fervent nationalists, and the match was primed for violence long before the drone even appeared, he says. "It was clear that this game was really going to be fraught with tension," Borger says. 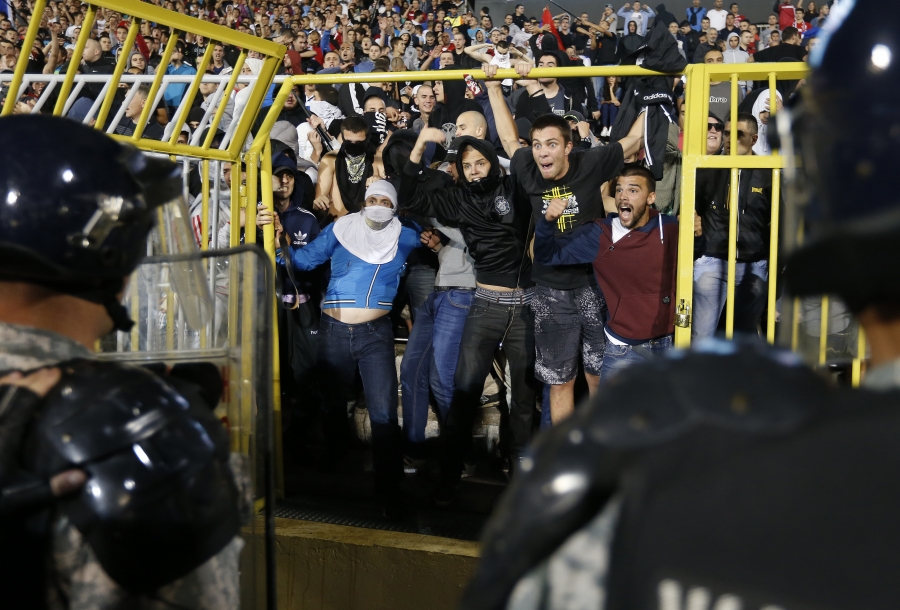 Fans of Serbia confront the riot police during the Euro 2016 Group I qualifying soccer match between Serbia and Albania at the FK Partizan stadium in Belgrade on October 14, 2014.

Even many of the security guards got in the act; Borger says that security companies often hire hardcore soccer fans to fill jobs. The fans were so violent that he says some Serbian players actually stepped in to save the Albanians from serious injury.

Serbian police have announced an investigation into who remotely piloted the drone, and UEFA, the European governing body for soccer, says it will open disciplinary cases against Serbia and Albania over the violence.

As for the game itself, it was abandoned, possibly to be replayed at a neutral site. Yet it still marked a milestone in the long-simmering violence between Albania and Serbia, Borger says: "This is just the first time it has taken the very 21st Century form of a drone conflict."