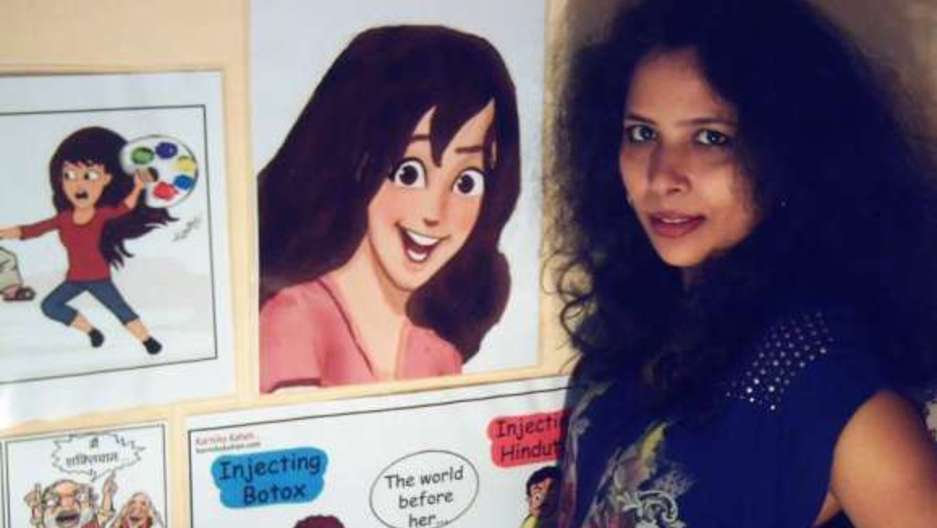 Karnika Kahen is a sharp rejoinder to the "common man," male cartoon characters that comment on current events in India. Mishra, an Indian cartoonist and animator, made sure Kahen came out shooting. Some of the first comments the character made were to criticize a popular Indian guru, Asaram Bapu, who made outrageous statements about one of India's sexual assaults.

In India, people like Bapu are derisively called godmen. Bapu has millions of followers and an ashram in Ahmedabad in Gujarat State. He's popular for his teachings on the Hindu religion. But after the 2012 gang rape and murder of a 23-year-old college student in Delhi, Bapu said this: "the victim is as guilty as her rapists. She should have called the culprits 'brothers' and begged before them to stop. This could have saved her dignity and life."

Bapu's blame-the-victim comments angered Mishra so much that she started to draw cartoons about him featuring her new character, Karnika Kahen. She published them on Twitter and Facebook. Media outlets noticed and started writing about Mishra's cartoons. But Bapu's followers reacted too.

They began an aggressive campaign of threat and intimidation on social media, repeatedly threatening Mishra with rape and murder herself. Mishra reported the threats to Mumbai's Cyber Crimes unit and the local police. But she didn't stop cartooning.

For her work, and her determination not to back down, Mishra is receiving this year's "Courage in Cartooning" award from the Cartoonists Rights Network International. As for Bapu, his circumstances have changed as well.

In 2013, Bapu was charged with the sexual assault of a 16-year-old girl. Protests followed his arrest. Mishra drew more cartoons.

Mishra says she won't stop cartooning despite the harassment she receives. She's part of a new generation of women in India that is demanding to be heard.