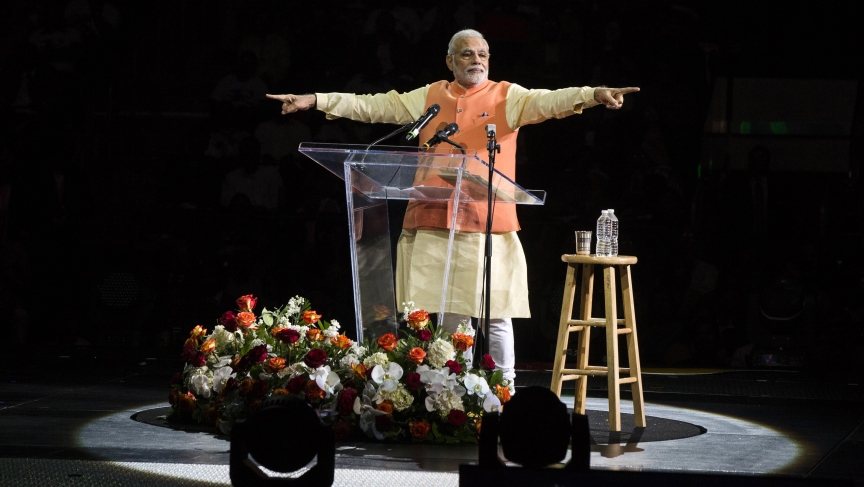 Indian Prime Minster Narendra Modi wraps up his first visit to the United States as his country's head of state on Tuesday.

He was in New York City for the UN General Assembly, and got a hero’s welcome Sunday at one of that town’s storied venues: Madison Square Garden. Modi was supposed to speak at that very same venue in 2005, but, at the last minute, the US revoked his visa because of his alleged connection to religious violence in his home state of Gujarat.

The India-America connection was made early and often at Madison Square Garden. And while he was greeted with loud cheers from throngs of supporters, his connection to those fatal riots remains an issue.

The event kicked off with a song from the 2007 Indian Bollywood movie "Chak de India." Then, like a scene out of any US political rally, it was time for some Bruce Springsteen — "Born in the USA" — in this case. Excitement built throughout dance performances, videos, and a roll call of US politicians in attendance.

Next came cheers — as loud as any Springsteen concert — as Prime Minister Modi entered the arena. Modi, hands together in a traditional salute, slowly made his way to the stage.

He told the crowd of nearly 20,000 that they had improved the image of India abroad, especially here in the US. If it weren’t for them, Modi said in Hindi, the country would still be thought of as a "nation of snake charmers." 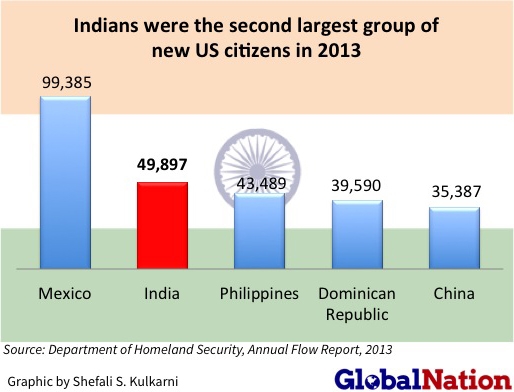 According to the Department of Homeland Security, Indian immigrants were the second largest group of new US citizens in 2013.

He talked for an hour about his goals for India and about the roll the Indian diaspora here in the US could play. People in the crowd said they’d never seen their community this energized.

“I’ve never seen anything like this,” said Tejal Parekh, who was there with a group from the non-profit Share and Care Foundation, based in New Jersey. “What I feel for Obama, I’m feeling for Narendra Modi. It’s just you want to do everything for both countries, that’s the feeling of patriotism that’s arising today.”

Modi made promises that appealed to people like Falgun Patel. “No more waiting in line for a visa,” Patel said, grinning. The prime minister told the crowd that the entire visa process would soon transition online. Popular, too, is the model Modi set in the state of Gujarat, which he led before becoming prime minister.

“I think he’s a fast-action prime minister, he has proven that in Gujarat. As a development agenda, I think he is very focused. He has clarity in his thought,” said Vikram Kattamreddy.

But his history in Gujarat is complicated. In 2002, the state was the site of deadly Hindu-Muslim riots: More than 1,000 people were killed, most of them Muslim.

Many said Modi was too slow to respond. And his affiliation with a Hindu nationalist group called the Rashtriya Swayamsevak Sangh, or RSS, also raised eyebrows.

Outside the rally, a crowd of protesters, many of whom were Muslims and Sikhs, held signs protesting the rise in Hindu conservatism they say Modi represents.

“In a strange way, Modi’s ascent to power and Modi coming here helps us because of the baggage he carries,” said Shaik Ubaid, one of the protest’s organizers. “It gives us an opportunity to talk about what a great danger RSS is.”

“Modi has really politicized a lot of folks,” says Khyati Joshi, a professor at Farleigh Dickinson University in New Jersey. Josi's research focuses on second-generation Indian Americans. “And I’m talking about folks here," she says. "Either they’ve become really gung-ho pro-Modi, or really anti-Modi, which often even translates into anti-Hindu.”

Joshi says the Modi debate has made it tough, in some Indian-American circles, to even identify as Hindu.

Reshma Patel was having an animated debate with two friends after the Modi event. Her feelings about the event — and talking to a reporter — illustrate how real that concern is.

“For a lot of people who are my contemporaries, especially living here in New York City, we’re still concerned about what happened in Gujarat. This is why I was hesitant to speak to you, because I’m like, I don’t know if I want that many people to know I was here,” Patel said, with a laugh.