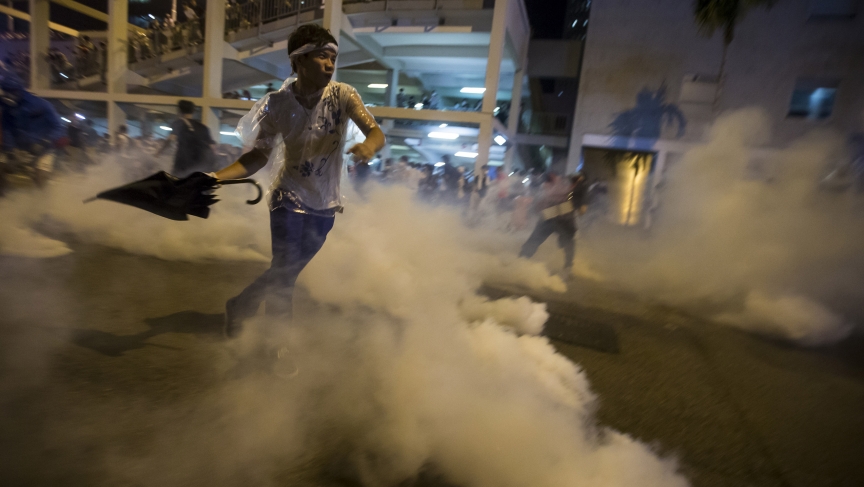 A protester throws an umbrella at riot police as fellow demonstrators blocked the main street to the central financial district outside government headquarters in Hong Kong on September 29, 2014.
Credit:

For the past week, thousands of university and high school students in Hong Kong boycotted classes, gathering to demand public dialogue over election reform. But on Saturday, hundreds of riot police used pepper spray and batons to disperse peaceful student protesters, arresting around 75 of them.

The protests turned violent enough that some protest organizers urged people to disperse to avoid being killed.

The protest in the city's Civic Square was an outgrowth of the earlier student boycotts. Demonstrators are demanding that Hong Kong's chief executive, Leung Chung Ying, address their concerns over Beijing's recent rulings on the city's upcoming elections.

The Beijing framework, set by the Standing Committee of the National People's Congress, says candidates for Hong Kong chief executive must be approved by a nominating committee before running for office. That decision guarantees that candidates will be pro-Beijing, and is viewed by many Hong Kongers as a reversal of China's promises to allow democracy for the city.

Leung, ignoring public opinion, has insisted that the Beijing framework keeps Hong Kong on the path of democratic development. He has refused to meet face to face with student protesters, accusing them of being “irrational."

Over the past week, protesters made several failed attempts to force Leung into a public debate. On September 26, a pro-Beijing group reserved Tamar Park for another function. But at 10:30 pm, student protesters decided to move their assembly from the park to Civic Square, in front of the main government building. That square is designed as a public space, but has been sealed off with barricades since June.

About 200 students managed to penetrate the barricades and enter Civic Square, but police stopped the rest of the demonstrators. As riot police attempted to enter the square in pursuit of the students inside, other protesters raised their hands to show they were unarmed and formed a human shield to block the officers.

Confrontations broke out in various spots, and police pepper sprayed the peaceful protesters. So far, around 13 student leaders and 61 protesters have been arrested. Hong Kong Apple Daily has released a video about the confrontation:

Joshua Wong, the 17-year-old leader of a high-school activist group called “Scholarism,” was handcuffed during his arrest. He was accused of participating in illegal assembly, disturbing public order and forcing entry into a government building, but was released on Sunday. However, other protest leaders who were arrested have still not been located.

Soon after news of clashes spread on social media, many people rushed to the scene at midnight on Friday to join the student protest. Hinhope, a local teacher, was among one of these late arrivals. Writing online, he described what he witnessed overnight:

1. Students and ordinary citizens were injured: The only violence I witnessed came from police. Some police used their batons to shuffle students and citizens who were just standing nearby. The police also pepper sprayed young protesters directly in their faces and seriously hurt them.

3. Hands up: The students and other citizens raised their hands to show that they were unarmed and would not fight back — people just stood there and occupied the space with their bodies to show their determination to struggle for democracy. But they were still pepper sprayed […]

9. Human shields and patience: On the road leading to Civic Square, students formed chains by holding each others’ hands. They just stood there for the whole night. You could see the patience in their eyes […] most of those standing on the frontline were young girls. 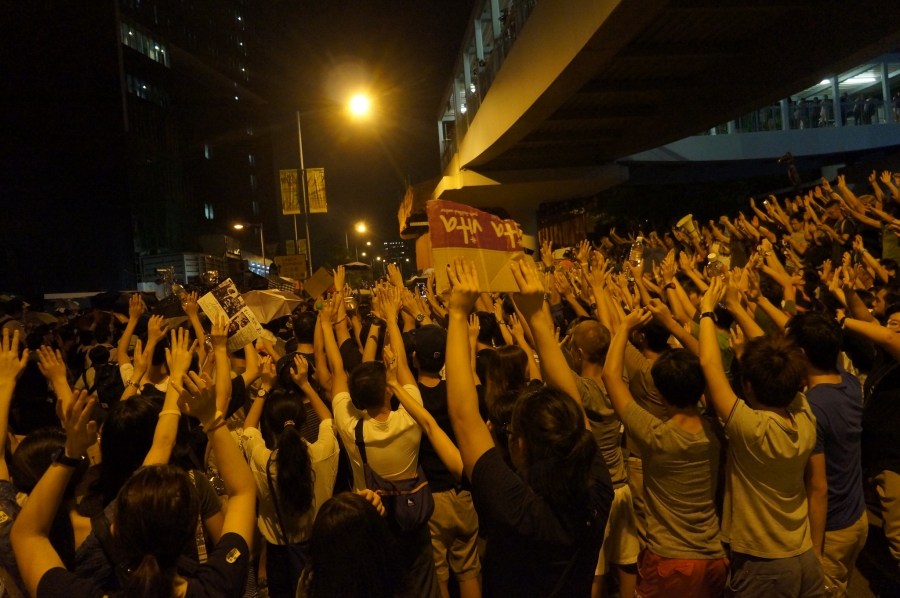 Protesters in Hong Kong raise their hands to show police that they are peaceful and unarmed during pro-democracy demonstrations over the weekend.
Credit:

The situation this morning was like this: riot police used their shields to hit my backpacks and pepper-sprayed my face. I could bear the first blow, but the police forced against a wall other photo journalists and protesters standing in front of me. I was almost trampled, and then I was pepper sprayed over and over. The pain was unbearable.

After being treated by a medical team, I recovered. But another student was hit on his head and bled a lot. Another student fell down and was dragged along the ground by police. This is the most violent crackdown I have ever seen in Hong Kong. Does the government really need to call upon riot police to respond to students?

My heart is filled with pain.

Meanwhile, Hinhope is urging teachers to strike and stand up for their students next week:

Students were on the frontline, facing violence. Shouldn't teachers and others in related spheres strike with the students next Monday? Shouldn't we be preparing for a mass sit-in, to stand together with our students?

Police may have arrested dozens of protesters at Civic Square, but more demonstrators arrived and occupied the road in front of the government headquarters. Protests and clashes have continued throughout the weekend into Monday morning in Hong Kong. 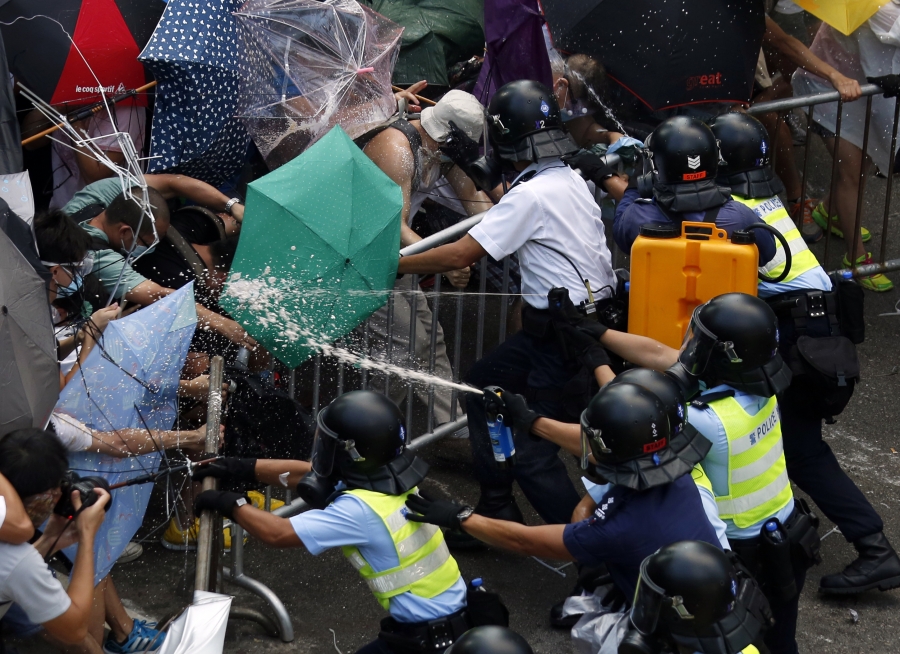 Police use pepper spray as they clash with protesters jamming the main street to the central financial district outside government headquarters in Hong Kong on September 28, 2014.
Credit:

This story by Oiwan Lam was originally published by our partner Global Voices Online, a community of bloggers from around the world.