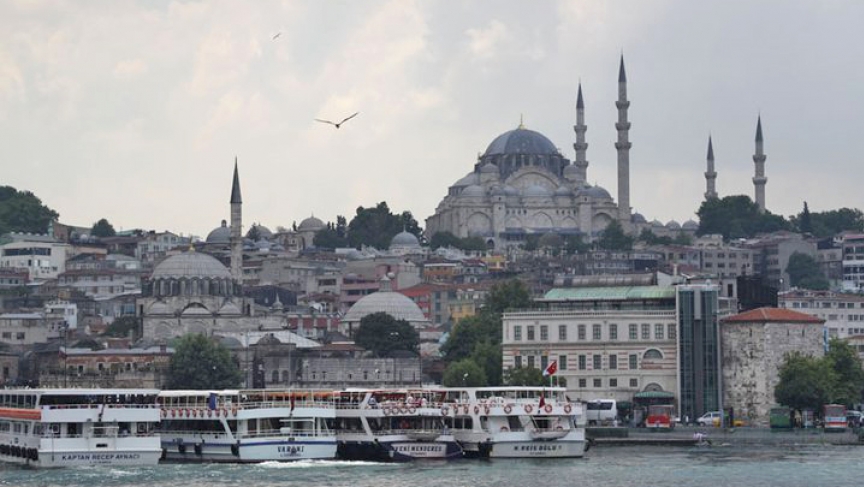 The Hagia Sophia in Turkey was a used as a mosque and a church at various times in the country's history.
Credit:

A mosque is the one place that brings together the diverse population of American Muslims. And the diversity of the community means there are often different views about what a mosque should look like.

When people think of mosques, two main images that come to mind are domes and minarets. But neither of those features actually come from Islam. "The dome is from the Christian faith," says Maryam Eskandari, an architect and founder of MIIM Designs, "and the minaret came from Zoroastrian."

In fact, she says, Islam lays out barely any requirements for mosques at all. Spaces must be clean and prayers must face the Kaaba in Mecca, Islam's holiest site — and that's it.

In fact, Eskandari points out, “there is a hadith — or a saying by the Prophet — in Islam that the whole Earth is a mosque." She says the general interpretation of that saying is that a mosque can be any place where you are able to pray.

That means there can be a huge variety in the designs of mosques, even incorporating elements from other religions. That's the case at the famous Hagia Sophia in Istanbul, which has alternated back and forth between being a church and a mosque throughout its history. There, mosaics of Jesus and huge Arabic calligraphy placards mix in the same building.

Furnishings can also vary the look of mosques. Eskandari says that while a mosque in Turkey or Iran might have blue tiles and carpets with colorful designs, another mosque in Khartoum, Sudan, or China, might not.

And the sect of Islam that prays there also has a role. Shiite mosques have a lot of symbolism, including floral designs on the tile work, while Sunni mosques might feature more calligraphy designs. Sunni mosques have different entrances and prayer spaces for men and women, whereas Shiites have only one.

The majority of mosques in the US are Sunni, Eskandari says.

But above all, Eskandari thinks the most important factor for modern mosques is a very modern idea: Sustainability. “[The focus should be] having community gardens, recycling rain water," she says, "and not the grand chandeliers and Louis XIV gold leaves."

This post is part of our coverage about mosques in the US. You can see our other stories here and here.