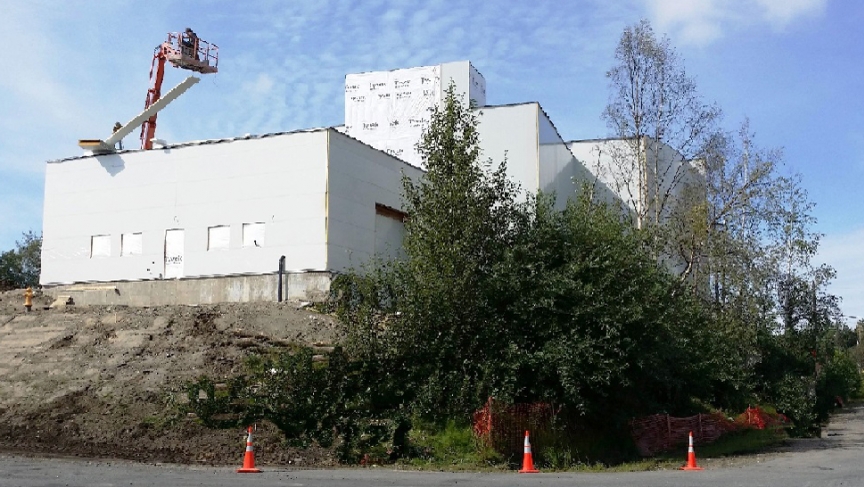 The mosque is currently in the final stages of construction.
Credit:

For the Muslim community in Anchorage, Alaska, the get-togethers and communal prayers used to take place in a rented space in a shopping mall.

"It's a small place," says Heather Robertson Barbour, a Muslim who lives in Anchorage.

She says over the years, the Muslim community in Alaska has grown larger and the space they rented became too small. But soon, they'll have a brand new mosque to call their spiritual home.

The idea for the mosque came about a few years ago and after years of fundraising, construction finally began in 2010.

Courtesy of the Islamic Community Center of Anchorage, Alaska.

"It will be a two-story building. The men will be in the prayer area on the first floor and the women will be on the second floor. There will be a balcony where women can watch the Imam when he does sermons," Barbour says.

The second phase of the construction consists of creating classrooms, offices and a library.

Because of harsh winters and heavy snowfalls in Alaska, the mosque will not have a dome. But the cold weather hasn't stopped the flow of immigration to Alaska. Barbour says her hometown is much more diverse than people think.

While this kind of diversity could cause friction in some communities, Barbour says that's not the case in Anchorage.

"If, say, an Arab tries to impose their culture, Pakistanis say, no, that's not Islamic. You have to go to the books, you have to research," she says.

And now that the state has a new mosque, Barbour thinks Muslims there will feel more organized. The place will give them more of an identity.

"We'll have the facilities. We won't have a kind of a rag-tag operation," she says.