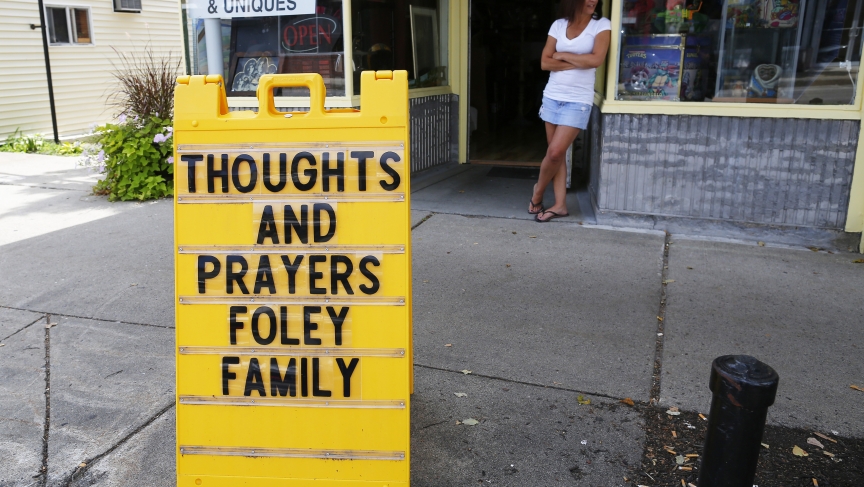 A sign outside a shop remembers James Foley in his hometown of Rochester, New Hampshire. Islamic State militants killed the journalist in a brutal videotaped beheading in revenge for US air strikes in Iraq.
Credit:

The tragic fate of American journalist James Foley has prompted intense soul-searching by his family, friends, colleagues and certainly the Obama administration. That's because the difference in how nations respond to terrorist ransom demands has produced two poignant and different outcomes.

Unlike James Foley, six French and Spanish journalists once held by the Islamist militants of ISIS — who now call themselves the Islamic State — are alive and safe at home. They were released in March, with little indication from the French or Spanish governments as to why they were let go. That stands in stark contrast to Foley's execution and the contuining captivity of American reporter Steven Sotloff.

The answer lies in cold, hard cash. "Although every country in the world says they don't pay, the reality is that, in fact, it's really only the British government, the US government, the Canadians and a few small European governments that don't pay," says Rukmini Callimachi, a reporter for The New York Times who has investigated the paying of ransoms for hostages. "Others say they don't pay, but they do — behind closed doors, through proxies, intermediaries, through a system that allows them essentially to deny that they ever paid."

She says that system has earned al-Qaeda and its direct affiliates more than $125 million in ransom payments over a five-year period.

The French and Spanish governments deny that they paid to win the release of the six journalists, but Callimachi is skeptical. "We are in touch with some of the people that the kidnappers contacted in Turkey and Syria in order to try and negotiate the movement of the money, so we know that these discussions were ongoing," she says. After all, terrorist groups do not release Westerners without having some of their demands met: "They're not a charity."

Callimachi also looked into the 2003 release of hostages held in Mali by a forerunner of al-Qaeda in the Islamic Maghreb, the al-Qaeda branch in North Africa. "I was able to go to Germany and I spoke to some of the German officials who were literally involved in carrying suitcases of cash to North Africa in order to win the release of hostages," she says. "Yet when you call the German foreign ministry — even though I've spoken to the very people who were involved in the money transfer — the foreign ministry will still tell you that no ransom was paid."

To maintain the fiction, she says, the ransom was camouflaged as an aid payment to Mali. "They sent the suitcases of cash to Mali. The president of Mali received the money and he then parceled it out to couriers who brought it to the terrorists who then released the hostages," Callimachi says.

Now there's growing pressure for countries to have a unified policy on paying ransom to terrorists. Critics say the current situation is a lose-lose proposition. If you're European, you're a target because the terrorists know they can get ransom money. If you're American, British or Canadian, your government won't pay the ransom and your best bet is to try to escape.

David Rohde, who was kidnapped both in Bosnia and Afghanistan during a long career as a foreign correspondent, is a particularly outspoken critic of the current situation. He was able to escape his captors after seven months, and thinks that divisions between American and European policies helped make that necessary.

"The payment of ransoms and abduction of foreigners must emerge from the shadows," he wrote in a column for Reuters on Wednesday. "It must be publicly debated. American and European policymakers should be forced to answer for their actions."