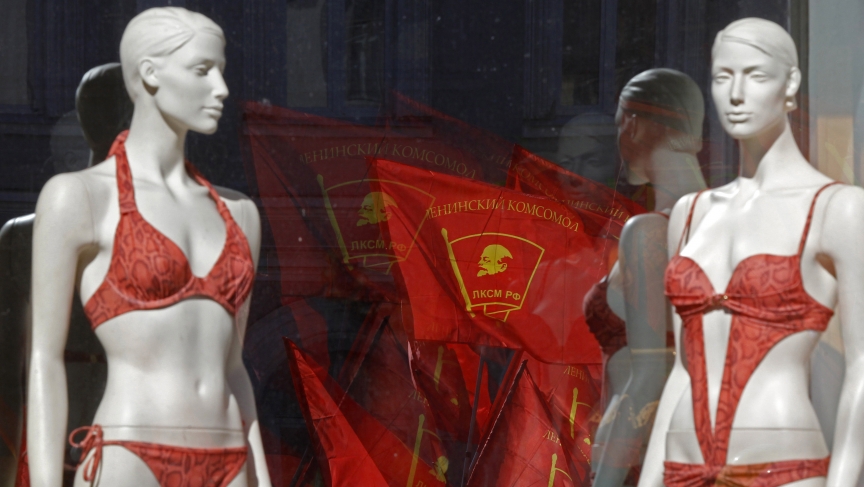 Communist flags are reflected in a lingerie shop window during a traditional Labor Day march in St. Petersburg in 2013. The models are wearing swimming suits, which aren't affected by the new regulations.
Credit:

The Russian government has implemented new bans recently on swearing in the media and arts and smoking in restaurants. And this is nothing new for a country that wades deeply into people's private lives.

But earlier this month, the Kremlin implemented a new ban on lingerie — and it's upsetting some Russian women.

Russian politicians have decided that synthetic underwear is bad for your health. As of July 1, underwear made from synthetic lace can no longer be imported into, manufactured by, or sold within the Russian-dominated Eurasian Customs Union, which includes Russia, Belarus and Kazakhstan.

The problem, according to Russian officials, has something to do with the fabric’s low “hygroscopicity,” meaning it doesn’t allow the skin to breathe properly.

I spoke to my cousin’s wife Olya Grishkova, who lives in St. Petersburg, about the measure.

“Nothing that happens in Russia surprises me anymore,” she tells me.

For Grishkova, the move seems like a distraction from the serious concerns the country is facing.

“This gives the impression that we have no other problems right now,” she explained. “I mean, if they’re discussing underwear problems at the legislative level.”

Grishkova tells me that she loves her lingerie and believes in freedom of choice when it comes to underwear.

But some Russian women, including my babysitter Galina, can commiserate with the reasoning behind the ban.

“I was itching because of them every day. I had a terrible allergy with a rash all over my skin,” she says.

Galina immigrated to the US from Moscow 15 years ago, but clearly remembers her oppression under the regime of fake lace underthings back in the Soviet era.

“One fine day it reached a point where I grabbed all my lace underwear, and threw them in the fireplace. Since then, I only wear 100 percent cotton underwear.”

Galina's convinced that many girls have this problem. But since no data was gathered by the Russian parliament before the measure was enacted, exactly how many women share her allergy to synthetics is unknown.

Clearly, the Russian Duma — whose membership is more than 85 percent male — isn’t taking any chances.

Some Russian government officials, however, think banning the majority of lingerie on behalf of these suffering women goes too far. If synthetic underwear does pose a health threat, they say, why not just treat it like cigarettes or alcohol by putting a warning on the label?

Also, Russian lawmakers know from experience that bans like this can backfire.

“When they disallowed alcohol, specifically vodka, there were riots on the street,” says my mother, Inna.

She was around during Mikhail Gorbachev’s attempt to ban vodka in the mid-‘80s, which backfired quickly. A black market for moonshine developed shortly after, and desperate tipplers resorted to drinking cologne, window cleaner and even insecticide. Businesses started accepting vodka in lieu of rubles as payment.

Now, my mom is wondering about the political effects of the lingerie ban.

“Who knows, maybe this will shake Russian political apathy?”

In the meantime, though, I'm wondering: Are Russian women going to start DIY-ing their delicates? Knitting their own lingerie out of dental floss? Fashioning camisoles out of those mesh bags oranges are sold in?

Even if Russia isn’t heading for a panty riot, Grishkova is already planning on taking matters into her own hands (or legs).

“If they are seriously banning lace underwear, I’ll secretly travel abroad to buy it,” she says.

“Maybe,” she kind-of jokes,” I’ll just put a whole bunch on under my clothes so no one will notice when I cross the border.”

Which brings Olya to the fundamental question: How, exactly, will Russia keep people from continuing to wear this stuff?

“They’ll probably invent some kind of sensors or they’ll X-ray people or something,” she says.

Either that, or being a Russian cop just got a whole lot more fun.

Oh, and I should mention that the Russian parliament may not stop at undies.

The "Fair Russia" party is sending a bill to parliament that proposes a ban on high heels, not to mention sneakers, moccasins and ballet flats.

You know, due to increasing concerns about bursitis and flatfoot.

So, if you're flying into Russia, you might as just well leave your shoes, along with your liquids, at the TSA security checkpoint.