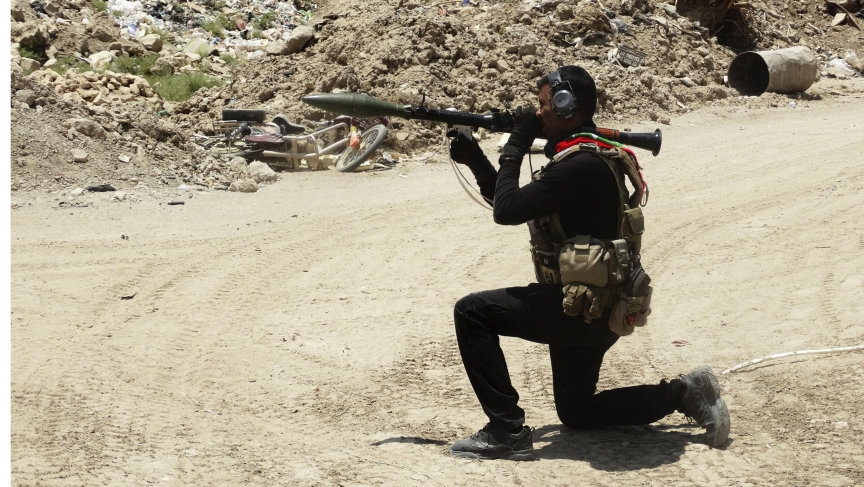 A member of the Iraqi Special Operations Forces (ISOF) takes his position during a patrol looking for militants of the Islamic State, formerly known as the Islamic State of Iraq and the Levant (ISIL), in a neighborhood in Ramadi, July 23, 2014.
Credit:

It's been more than 10 years since American officials laid out a promise of a stable, democratic Iraq. But today, that prospect still seems like a fantasy.

On Tuesday, the Sunni extremist group ISIS, which now controls large parts of Iraq, blew up a key bridge north of Baghdad. The Iraqi Army is poorly equipped to fight the insurgency. And the White House doesn't have easy answers.

All this is the subject of a new documentary, "Losing Iraq," from The World's partner program, Frontline. It airs July 29 on PBS stations across the US.

Frontline's Michael Kirk, the director of the film, has covered the war over the past decade. He says the problems of today have their roots in the immediate aftermath of the US-led invasion in 2003. "There are so many moments in the Iraq narrative where you could say, 'ah, that's where it went wrong, that's when the sectarianism started.' But some of the biggest blunders happened in the beginning of the war and the start of the Coalition Provisional Authority led by Paul Bremer," he says. "It shows the foundations of where we are today."

Kirk says Bremer had almost no preparation for this job; he knew very little about the Middle East and didn't speak Arabic or any other of the region's languages. What Bremer did have going for him was contacts at the White House and a resume that listed Henry Kissinger as his boss.

Kirk says Bremer went in believing he would do the basic things for Iraq: get the lights going, the water working, get a government established, and start a democracy. “Bremer was the tip-of-the-spear who went in naively,” Kirk says. “And in some ways, he is the ultimate metaphor for happened.”

Military commanders rebuffed one of Bremer’s first orders: to shoot looters. But his subsequent order to get rid of anyone involved in Saddam Hussein’s Ba’ath Party was followed — with disastrous results. The idea at the time was to remove Saddam's shadow by getting rid of his former officials. In doing so, the people of Iraq would hopefully by able to put past crimes behind them and work together.

Bremer's predecessor, retired general Jay Garner, warned Bremer about this decision, as did a CIA employee in Iraq at the time. In a face-to-face meeting, they said it would make between 30,000 and 50,000 powerful Iraqis instantly angry with the Americans. “He nevertheless went forward with this idea,” Kirk says.

Today, it’s easy to look back on the war in Iraq and believe it was destined to turn into a bloody catastrophe. But General Jack Keane, the acting Army Chief of Staff in 2003 who was opposed to the invasion, says former Secretary of State Donald Rumsfeld and others involved in the planning of the war never gave any thought to an insurgency or sectarian violence. “The idea of the potential roiling trouble that was going to emerge never seemed to cross the table,” Kirk says. “Somebody like Keane could look back on it now as he did then and say, ‘We’re going down into the quicksand here.’"

Frontline produced the documentary in just three weeks. Kirk says they made the call when they realized the ISIS insurgency was going to be a lasting presence. It was the next act in the future of Iraq. Producing the film and going through the archives of tape, Kirk says, was alarming. Throughout the process, he was reminded of what Americans didn’t know at the time — and, paraphrasing a famous line from Rumsfeld, and what we didn’t know we knew.

“There were all those Rumsfeld-like moments that happened and you just say to yourself, ‘Oh my god! Watch this. This is Vietnam again,” Kirk says.

Frontline made the call to show gruesome scenes of the war. "Losing Iraq" will be one of the most graphic programs ever to air on PBS member stations. There are bodies hanging, bombs detonating, and prisoners executed with a handgun. Kirk says it's an effort to drive home the reality of where Iraq has landed after more than a decade of war.

“We thought it seems really important to not only talk about the political history of what happened but to show viewers what that was really like.”