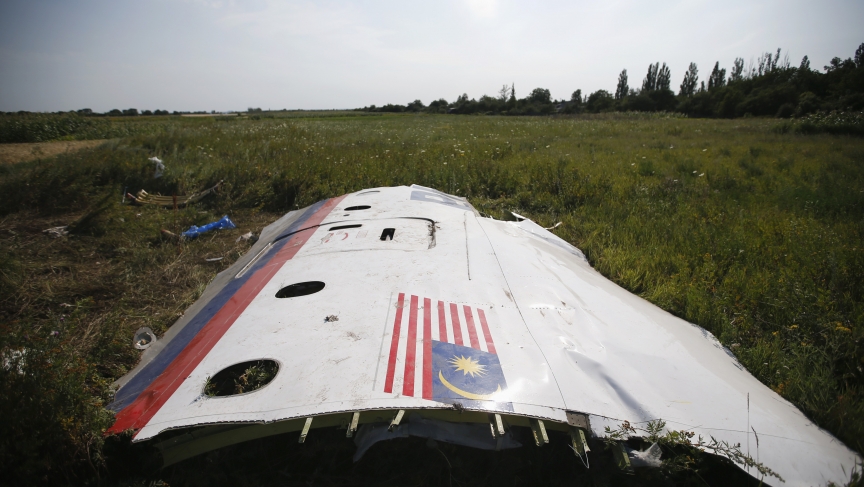 A piece of wreckage is seen at the crash site of Malaysia Airlines flight 17 near the village of Petropavlivka, Donetsk region July 24, 2014.
Credit:

Did they or didn't they?

The Russians, I mean.

Did they have anything to do with the downing of Malaysia Airlines flight 17?

US and Ukrainian officials say Russia had at least an indirect role supplying the missile that shot down the plane to the rebels in eastern Ukraine who fired it. But Russia and its president, Vladimir Putin, strongly reject suggestions they played any role.

I spoke about this today with Time Magazine's Simon Shuster.

He covers Russia and Ukraine — and he's been covering the story of flight 17 since the tragedy happened. That includes visiting the crash site — an experience that stays with him.

"The most difficult part was seeing the personal effect, the possessions of the passengers strewn about totally unguarded," he says. "I saw a lot of children's things, you know pink suitcases, toys, a lot of people were clearly headed on vacation."

For his latest Time cover story, though, Shuster shifts his focus to the Russian response to the crisis. The story is entitled: "In Russia, Crime Without Punishment." In it, he takes a close look at Putin's unapologetic foreign policy in the context of what happened to flight 17.

So what was it like to hear the Russian response to the incident after reporting from the crash site. He answered in two words: gut wrenching.

Shushter says there is no smoking gun that directly links the destruction of flight 17 to President Vladimir Putin. "But the fact is that Russia has supported the rebels, provided them with weapons, all of that is known," he says. "For Putin to completely skirt any kind of responsibility, to simply point the finger of blame immediately at Ukraine, even the same night as the catastrophe, that's painful."

Painful to the victims' families. Painful for the diplomats. Painful for global leaders who have to sit across the table from Putin.

In his story, Shuster argues that Putin creates problems so he is able to solve them. He backs up that claim with evidence from the past year: The crisis in Syria, fueled by Russian weapons. The conflict and subsequent annexation of Crimea, led by Russian irregular forces. Then there's the current meddling in eastern Ukraine. "And in each and every one of those [instances], Putin finds himself the man that everybody needs to talk to," Shuster says.

It makes him seem powerful to his own populace. It should be noted, Putin is very popular in Russia. He has an 86 percent approval rating. Shuster says it also makes the West look fairly weak and indecisive. In his piece he shows this by listing off the responses to the plane crash by President Barack Obama and Dutch Prime Minister Mark Rutte. Both were weak.

But that doesn't mean the US is calmly sitting by and letting Putin do what he wants. The sanctions imposed recently are having an impact on the Russian economy. And Shuster says the threat of greater sanctions is definitely influencing how Putin acts.

But he says we need to be careful about how Putin responds. Shuster points out that Putin is a black belt in judo. And his foreign policy has a judo-like nature of backing away at exactly the right time to throw his opponent off balance.

"That's been the behavior, and I think we're going to see that now as well. He's going to back off. He's going to [back off] for this investigation to proceed. But he's not going to stop pursuing the broader strategy, which is to destabilize Ukraine to the point that it's not a functioning state," Shuster says.