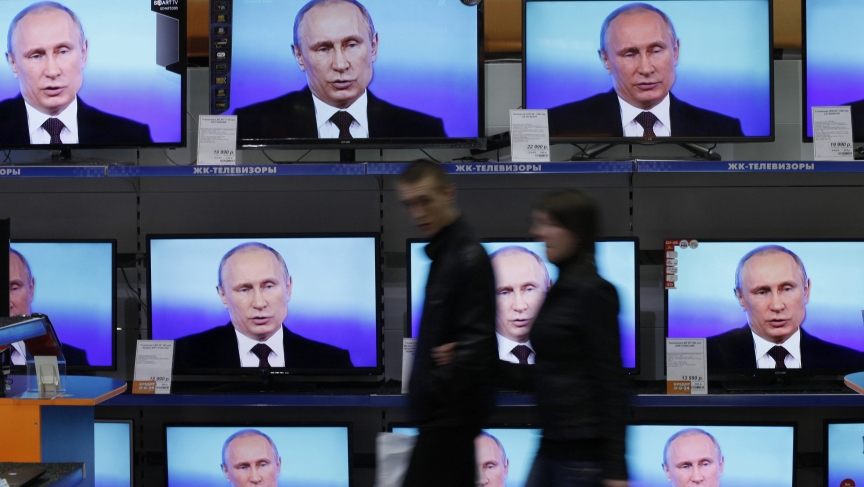 While the world waits for answers surrounding the destruction of Malaysia Airlines Flight 17 and the lives of the 298 people on board, the Russian media has taken matters into its own hands.

Evgeny Popov, host of a weekly news roundup program on Russia One, one of Russia's three state-controlled television channels, says Ukraine should be held responsible for what happened in its airspace.

"Ukraine is currently trying to distance itself from the tragedy,” Popov said in a recent segment. “In Kiev, they still haven't answered the question, 'Why did Ukraine change the airliner's route and send it over the area where the fiercest fighting was taking place?’"

The supposed route change is one of the numerous and often bizarre conspiracy theories that marginal media outlets have fed to the Russian public. But mainstream media, which is almost all owned or controlled by the Russian government, is also churning out content that exacerbates the divide between Russian President Vladimir Putin's supporters and those fearful and suspicious of their government.

Dmitry Babich, a political analyst for Voice of Russia Radio, says the Russian government has not yet landed on a version of what's happened because it's still too early to make conclusions. But that hasn't stopped the government from speaking out.

Meanwhile, Babich says, Western politicians and media outlets are hurting their own case by making their hasty accusations that unjustly push blame onto Russia

"I mean hours after the crash, the British tabloids came out with headlines like, 'Putin Has Killed My Son' or 'Putin's Missile' — even though it was not actually clear how the plane came down," Babich says.

Babich says American citizens are being naïve by flatly believing their government.

"Why did George Bush make up the evidence that Iraq had a nuclear weapon? Why did US officials lie so many times in the course of their history?” he asks. “Unfortunately, it seems to me that Obama, like many leaders in the European Union, has a wrong image of what's going on."

Even with Russian media making his case, Kevin Platt, a professor at the University of Pennsylvania, says Putin faces difficulties at home. On the one hand, says Platt, these stories are helping Russia obscure any connections it may have to the crash — especially in the minds of the Russian public.

"It's consistent with Russia's overall position, which is to cast as much doubt on any possibility of drawing any conclusions whatsoever," Platt says. "There will be the possibility of denying Russian involvement, and quite possibly denying the involvement of the separatists in the tragedy, for as long as possible — maybe forever."