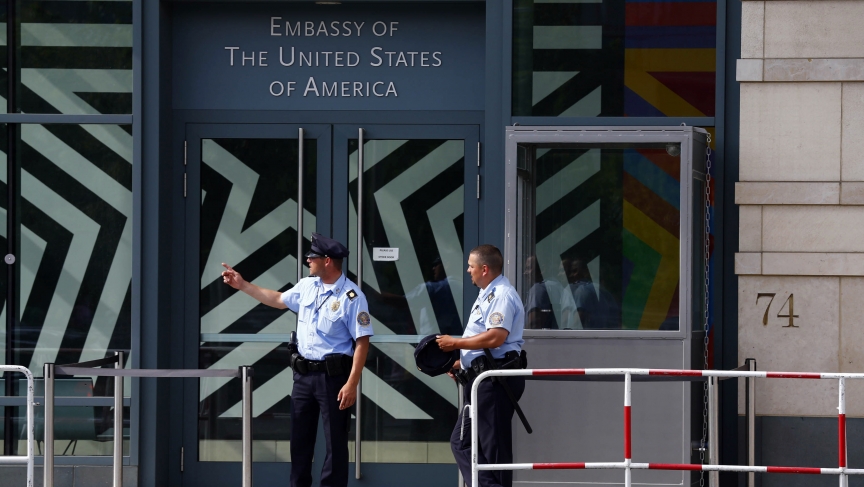 Security officers stand outside the U.S. Embassy in Berlin July 10, 2014. Germany asked the top U.S. intelligence official at the Berlin embassy on Thursday to leave the country, a highly unusual step reflecting the deep anger within Angela Merkel's government at the discovery of two suspected U.S. spies within a week.
Credit:

Remember the embarrassment caused last year when it emerged that the US was listening in on the private communications, not just on our enemies, but also of our allies — in particular German Chancellor Angela Merkel's private cell phone calls?

It looks like very little has changed. German police are now investigating two Germans suspected of spying for the United States. And on Thursday, the German government responded by ordering the expulsion of the CIA's station chief in Berlin, the highest-ranking US intelligence official in the country.

So how damaging are these further revelations — and what is really at stake for each party here? Actually, not that much.

“The officials in Germany say that nothing too serious was compromised," says Jonathan Laurence, senior fellow of foreign policy at the Brookings Institute. "It was more the Americans trying to get a sense of the discussions internal to the German intelligence and foreign ministry. 'But between such good friends,' the Germans say, ‘Why don’t you just ask us?’”

But is that realistic? Would Germany simply supply the US with inside information? Laurence says that depends on what issues the Americans are asking about.

Germany accepts the security umbrella provided by the US and NATO, and with that, according to Laurence, comes a certain amount of intelligence gathering. The uncovering of potential spies, in that context, is par for the course.

“There’s no questions of diplomatic relations being broken off, no question of tit for tat. This is pretty pro-forma stuff,” Laurence says. “When spies are uncovered, their handlers are sent home.”

As for affecting US-German diplomatic cooperation on issues like Iran and Ukraine, there may be a bit more iciness in the room — but nothing more.

“The US and Germany share so many interests security-wise and economy-wise," Laurence says. "[T]o chill relations because of a fairly routine case of low-level spies being caught is an own goal situation."