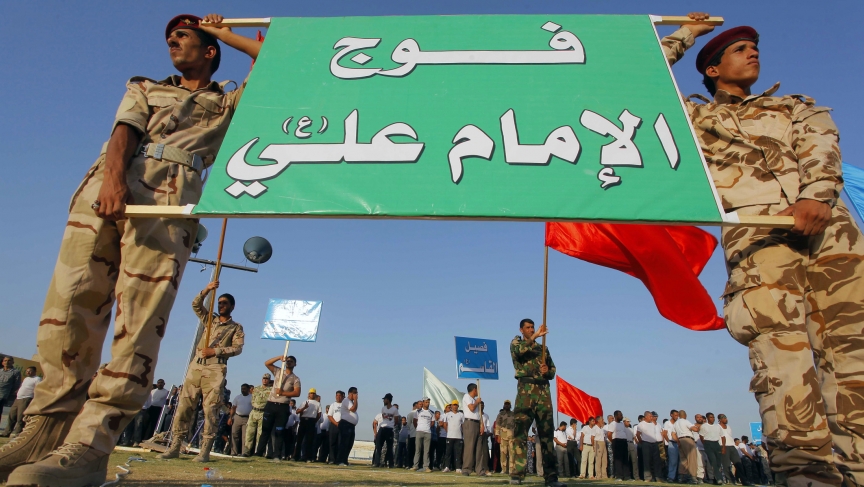 Shi'ite volunteers, who have joined the Iraqi army to fight against the predominantly Sunni militants from the radical Islamic State of Iraq and Syria (ISIS), hold a sign during a graduation ceremony after completing their field training in Najaf, that reads: "Regiment of Imam Ali."

Sunni militants are running roughshod in northern and western Iraq. The Kurds are consolidating their gains over the prized oil city of Kirkuk. And in the Shia strongholds of Baghdad and southern Iraq, the call has gone out to take up arms against the Sunni threat.

Iraq is already dismembered, as one expert puts it.

The Obama administration is weighing its options. It wants the Shiite dominated government of Nouri al-Maliki to be more inclusive and thereby lay the groundwork for a long term political solution to Iraq's problems. A few hundred US military advisors are being sent back to Iraq. And now, the White House wants Congress to approve $500 million in new funding for moderate rebels next door in Syria, who also happen to be fighting ISIS militants. The following is a lightly edited version of an interview with Iraq expert Michael Knights of the Washington Institute for Near East Policy.

The Obama administration wants Prime Minister Maliki to reach out to his political rivals. But is there time, given the urgency of the security situation in Iraq right now?

It's very difficult to take a complex political process like selecting the new Iraqi prime minister and forming the new government, and squish that into a very short period of time that the security crisis requires. What's likely to happen in the coming week is that before Ramadan begins in Iraq, which begins around June 29, the Iraqi politicians need to sit down and come up with a basic solution to who's going to be the next prime minister. And then, leave most of the details of government formation until after Ramadan to select all the other roles, like who will be the president, the speaker, who will be the various ministers. So, what they'll be trying to do is to agree in principle, what the leadership of the country looks like going forward. And to use that to allow Iraq to push forward to receiving US military support, but also importantly to push forward with creating a national effort to try and solve this security crisis.

If you were an advisor at the White House, how reassured would you be by the statements from Iraqi officials about political reform?

You can definitely sense that there is increased momentum about tackling the issue of who is going to be the next prime minister of Iraq and whether deals will be struck with some of Iraq's minorities like the Sunnis and the Kurds. That's the positive side. But, to be honest, the US is not a major player in this government formation in Iraq. The military support being offered by the United States could be critical to fighting ISIS and in restoring federal control to some areas of northern Iraq. But the Iranians are providing military support a lot faster and in greater quantities. So, in many ways they're becoming the key actor in how the next Iraqi prime minister is chosen.

What about the White House request for $500 million for supporting moderate Syrian rebels, who are also fighting ISIS?

The Obama administration is on the slippery slope now, where it's being drawn into ever-increasing measures to try and shore up both the Iraqi government and the moderate opposition in Syria. But it's probably a case of too little, too late on both counts. Without being too negative, the longer you wait to act in Iraq or Syria, the greater the amount of force and money and political capital you need to invest to stabilize the situation. And what we're finding is that the Iranians are outpacing us in both Iraq and Syria at the present time.

In a strange way, the US is now partnered with Iran in the sense that they share this enemy of radical Sunni extremists who have grabbed control of parts of Iraq.

It's true that US and Iranian policy have often pushed in similar directions when it came to maintaining basic government stability in Iraq and fighting radical Sunni Islamist groups like ISIS. But that is where the similarities end. When you look at US and Iranian policy in Iraq more broadly, there are very few points of common interest. The Iranians want to build up the Shia militias, and want to pursue [a Syrian government] Assad-style military solution to Iraq's sectarian problems. The United States wants to push a more gentle, population-focused approach to do with cutting deals with the Sunnis. So, there's a very different starting point to solving this crisis in Iraq. The US believes that the Iranian approach, the 'military only' approach, is one that will only exacerbate the problem, as it has in Syria.

For those who've been calling for more US military intervention in Syria, and now in Iraq as well, should the Obama administration's latest funding requests — $5 billion for regional counterterrorism and $500 million for moderate Syrian rebels — be seen as a move in the right direction?

It's always reassuring to see the US being a player in places like Iraq and Syria, because the US has strategic interests in these places and it needs to shape the outcome. But sometimes, providing a little support late in the game is as useless as providing none at all. The US probably needs to weigh in very heavily in a place like Iraq, in order to have influence over government formation and the future direction of the country. So, hopefully what we're seeing is the start of a very significant security cooperation effort with Iraq and that it will build from here. [I hope] it won't end with 300 advisors and a few hundred million dollars of support, but will instead build back into a true partnership, where the US government can help to guide the Iraqis toward a more refined counterinsurgency policy and away from the brute force approach that Iran is advocating.

Sounds like you're withholding judgement and not sure that this represents a big change in US policy just yet.

Let me give you an example. It's great to send 300 US advisors — these are 300 experienced US officers, many of whom served in Iraq and in fact defeated al-Qaeda in Iraq just five years ago. Sending those kind of men over there could tip the balance in favor of the federal government and keep Iraq in one piece. But you've got to give those advisors the ability to get out amongst the Iraqi units, where they will be exposed to some risk of attack. So, sending the 300 advisors is good. But you've got to let them do their job once they get there. They'll only be effective if they can get down to low level, with the Iraqi security forces. And we know from various reporting that the Iranians have already embedded close to 3,000 advisors down at those low levels with Iraqi combat units. So, we're already being outnumbered by the Iranians and if we don't allow our advisors to get out there and actually do their jobs, then sending them is just a hollow gesture.

So this is simply too little, too late?

I'm actually very encouraged to see the US administration ramping up support for the Iraqi government. What I hope I'm seeing is that once Iraq agrees on a cross-sectarian unity government, the US will weigh in heavil with military support, including — where appropriate — direct air strikes on ISIS forces. This is what the US would do in any other country in the world with this kind of terrorism problem. I hope the US isn't just setting a very high bar for the Iraqi government to form within a short period of time as a way of avoiding having to do air strikes at all.

Are US air strikes the only way to change the dynamic on the ground?

At the moment, there are two main theaters of conflict in Iraq. There's the defensive fight around Baghdad, where the Iraqi government is trying to protect Shia populated areas and the capital city. That is a very complex, messy fight, where there are likely to be sectarian massacres and where the Iraqi government is relying primarily on militias to undertake those defensive battles. That's not a fight that the US wants to get involved with. But there's another fight all across Iraq's less-populated northern provinces, including the open deserts out to Syria. And in these areas, the Iraqi government faces the challenge of how to get back into these Sunni areas without just creating an even larger uprising. It's a difficult challenge for the Iraqi government. And it's particularly difficult for the Iraqi government to do this its own, because it's seen as being anti-Sunni and because there are very long distances involved. So, it's actually in the fight for northern Iraq where the US could provide the most useful security assistance. The US has the air power to be able to deliver supplies and troops directly into remote air bases across the north that the Iraqi government still holds. It's got the air power to protect those air bases from ISIS attack and to sustain them as bases for future operation. And the US can also play a key role in the stabilization of Sunni Arab northern Iraq, because the US is a trusted third party who's worked with those same tribes in the past to defeat al-Qaeda.