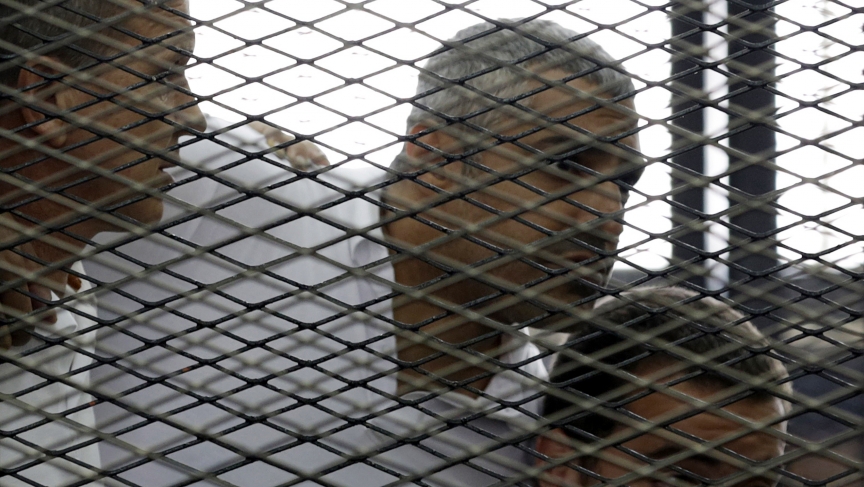 Peter Greste, Mohamed Fahmy and Baher Mohamed, from left, listen to a ruling at a court in Cairo June 23, 2014. The three Al Jazeera journalists were jailed for seven years in Egypt on Monday after the court convicted them of helping a "terrorist organization" by spreading lies, in a case that has raised questions about the country's respect for media freedoms.

For decades, the United States considered Egypt a close ally. But that alliance was showing signs of strain this past year after the Obama adminstration criticized Egypt's human rights record and its crackdown on media.

Egypt, on the other hand, was criticial of Washington's support of Mohammed Morsi and the Muslim Brotherhood. Further adding to the strain was a move by the Obama administration to freeze millions of dollars in military and economic aid to Egypt.

But Secretary of State John Kerry's high-level visit to Cairo over the weekend signaled that Washington was ready to establish better relations. During the trip, he announced the US was releasing 10 Apache attack helicopters and $650 million of aid to Egypt.

Just on the heels of Kerry's visit, three Al Jazeera correspondents — Peter Greste, Mohammed Fahmy and Baher Mohamed— were found guilty on Monday of helping a "terrorist organization" by spreading lies. They've been sentenced to seven years in jail for what are widely regarded as trumped-up charges.

The verdict, said Buzzfeed Middle East correspondent Sheera Frenkel, is terrifying for all journalists in Egypt.

And it may present a new challenge to repairing the relationship between US and Egypt.

The US wants to see Egypt on a democratic path, but there's been case after case of problems. "And this isn't going to help," Frankel said.