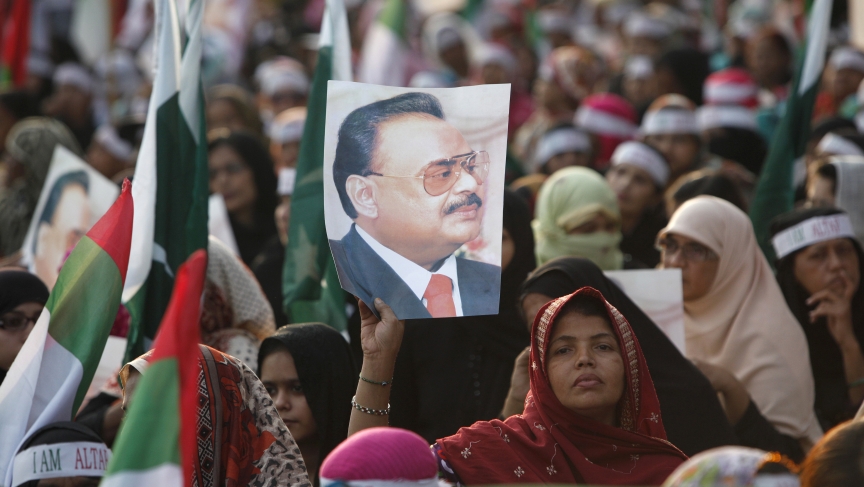 A supporter of Pakistan's Muttahida Quami Movement (MQM) political party holds a poster with a picture of their leader Altaf Hussain during a rally along with others to demonstrate solidarity with their leader in Karachi February 2, 2014. He subsequent arrest on June 3rd in London is causing panic in the city.

Protests and panic spread through the streets of Karachi, Pakistan Tuesday, following the arrest of Altaf Hussain in London on suspicion of money laundering.

The leader of the Muttahida Qaumi Movement party, known as the MQM party, hasn't lived in Karachi since 1992. But he casts a huge shadow. After news of his arrest hit the streets of the city, businesses boarded up, the stock market dropped and protesters torched cars.

How does one man have such an outsized influence over Pakistan's largest city?

We put the question to Shahzeb Jillani, a BBC correspondent in Pakistan who has been following the events from Islamabad. He says to understand Hussain, you need to understand how he came into power. Jillian says its all starts after the partition of India in 1947. Urdu-speaking Muslims from India migrated and settled in Karachi. In the 1980s, Husain sought political rights for these people. He founded the MQM party, unifying the migrants, and their descendants, into the strongest political party in the area. Jillani says the MQM has pretty much swept the elections for the last three decades.

Why? Well, Hussain's admirers see him as a champion of democracy. He's encouraged middle class citizens to run and win parliamentary seats. He's against Islamic extremism and feudalism in Pakistani politics.

But he also has his detractors. "His critics call him a murderer," says Jillani. "Somebody who has run the party like a godfather."

Jillani says some people see the MQM party as perpetrating violence on the streets. It has been accused of being involved in killings and extortion. That's a big reason why Hussain is in London. He fled there in 1992 amid a military operation to end ethnic unrest in the city. Britain granted him political asylum. Ten years later, he gained British citizenship. "But during these years, he's controlled the party in Karachi with an iron fist," says Jillani.

Thousands will gather to hear Hussain give speeches over the telephone. Jillani says they see him as a father-like figure, one with plenty of personality. He'll sometimes break into song during speeches. People eat it up. They love him.

That’s why the city went chaotic today on the news this beloved figure had been arrested. That said, what's been happening in the past few hours does not compare to what happened in the past, Jillani adds. And the MQM party is encouraging its most ardent followers to use restraint, stay calm, and not resort to violence.

But no one quite knows what will happen if Hussain is found guilty.

"He's seen as someone who is unpredictable, who is erratic in his behavior, and who could do anything to keep control in his own hands," Jillani adds.