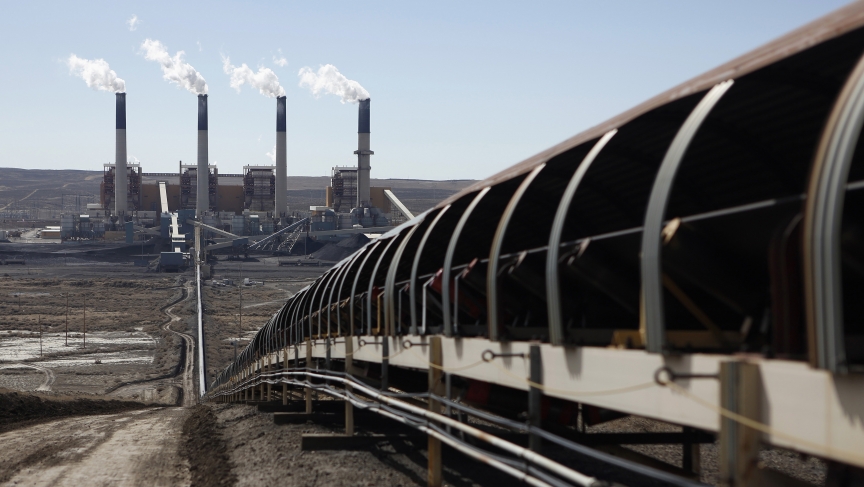 The EPA's new proposed rules to cut climate change pollution are aimed squarely at coal fired power plants like this one, the Jim Bridger Power Plant in Wyoming. Power plants produce more than one-third of the U.S.'s greenhouse gas emissions, and coal is by far the dirtiest power plant fuel.

Well, now comes a response of sorts from the Obama administration in the form of a major new plan to cut climate pollution, potentially its biggest move on the issue to date.

What Americans are going to do, if the proposal survives numerous challenges, is burn a lot less coal in their power plants.

The proposal, announced Monday by EPA administrator Gina McCarthy, mandates a 30 percent reduction in carbon dioxide pollution from electricity generation in the US by 2030, based on 2005 emissions.

And since the biggest source of power plant emissions is coal, that's where the mandate will have its biggest impact.

But there won't be any dictates from Washingon on how to meet that target. Instead, each state will be able to figure out its own approach — by itself or in partnership with others.

And there's a pretty big grab bag of options states can choose from.

They can clean up existing power plants, replace those older plants with cleaner ones, invest in low-carbon renewable energy sources or nuclear power to offset the emissions of those dirty old plants, or invest in efficiency to cut demand for electricity.

The EPA, which drafted the new proposal, doesn't choose favorites among the options, but it's clear the overarching priority is to put the squeeze on coal-fired power plants. That's because, while power plants as a whole are responsible for roughly one-third of US CO2emissions, coal plants are by far the dirtiest among them.

The move is the latest initiative from the Obama administration on climate change, and it came after four years of planning and strategizing.

The president's first big step on CO2 was his effort to use the administration's huge economic stimulus program to help build a "green" energy infrastructure. Next came a deal with the car industry to roughly double fuel efficiency in cars by 2025. Last year saw the EPA set new emissions rules for future power plants.

Now comes the EPA's move to crack down on existing power plants — long expected, but politically and technically by far the most difficult, and not the administration's preferred route to cracking down on power plant pollution.

The preferred course was new legislation from Congress, specifically targeted at climate pollution.

Obama came into office promising that, and in 2009 he vowed at the international climate summit in Copenhagen to cut US emissions 17 percent from 2005 levels by 2020.

Just a few months later, the House of Representatives passed a controversial "cap and trade" bill to start putting the squeeze on emissions.

But that bill died in the Senate, and since then Congress has been gridlocked on the issue, leaving the adminstration two basic options: give up, until or unless the political winds shifted, or use mechanisms buried in the 40-year old Clean Air Act to take administrative action on carbon pollution, which the Supreme Court had ruled in 2007 the EPA could do.

But the law itself was murky as to mechanisms, since climate change wasn't even on the horizon when the law was written — one reason it took four years for the EPA to work up its new power plant rules.

The rules are crafted to give states and power companies flexibility to find the most cost-efficient approaches. But those provisions are not enough to mollify critics.

And the pushback began even before the plan was announced.

Among other reactions, the US Chamber of Commerce has claimed the new rules will cost the overall economy $50 billion a year. Many Republicans and some Democrats in coal-producing states go even farther, saying they will destroy the economy. And opponents have promised to fight the new rules in the courts and in Congress.

But in announcing the proposal, the EPA's McCarthy forcefully dismissed those warnings.

"Critics claim that your energy bills will skyrocket," McCarthy said on Monday. "Well, they're wrong. Should I say that again? They're wrong. ... And given the astronomical price that we pay for climate inaction, the most costly thing that we can do is to do nothing."

Along with the often more abstract benefits of curbing CO2, the administration is also touting the immediate public health benefits.

The measures to cut climate pollution will also bring cuts in smog and soot, which the EPA says will also help significantly cut asthma and heart attacks, and cut down on work and school days lost to illness.

But those, and the bigger climate benefits, are several years away at best.

The new plan would have states submit their emissions-cutting plans in 2016, and then phase them in over the next few years. But even if they ultimately fail, those legal and political challenges could push the start date even farther into the future.

And even if it does go into effect as proposed, the plan falls far short of the quick and dramatic cuts in carbon pollution that scientists say are needed for the US and the world to head off the worst effects of climate change.

Such is the nature and scale of the challenge — that even a dramatic and extremely politically-charged plan like this new one from the EPA is ultimately just another very small step toward tackling this massive global problem.

Along with their direct impact on US emissions, supporters hope the proposed EPA power plant rules will prompt more action on climate change by other countries, especially China. Hear host Marco Werman's interview on the US, China, climate and coal, with Ailun Yang, of the World Resources Institute.