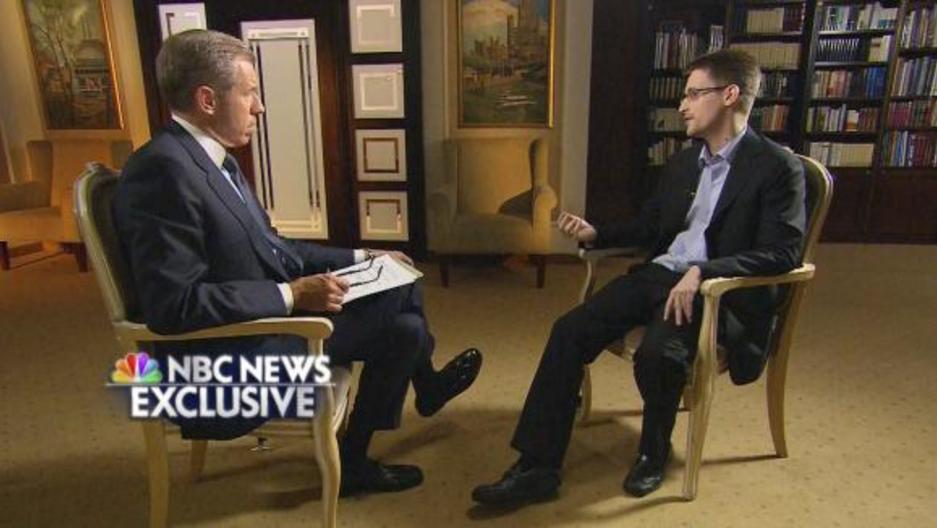 We haven't heard much lately from former NSA contractor Edward Snowden, the man who pulled back the curtain on the National Security Agency's vast global and domestic snooping programs.

Snowden is still holed up in Russia — keeping a relatively low profile. Except for an exclusive interview he's just given to NBC News. In a preview of the full interview, Snowden said that, contrary to what the government says about him, he wasn't just a data analyst.

"I was trained as a spy in the traditional sense of the word, in that I lived and worked undercover overseas, pretending to work in a job that I'm not, and even being assigned a name that was not mine."

According to The Guardian's Luke Harding, who was based in Russia for several years and is the author of "The Snowden Files," Snowden was a full-fledged and sophisticated spy. "Snowden really was a spy, he's not just making this up. We know for example that when he was in Switzerland, officially he was with the US State Department but actually he had a secret alias, he was called Dave M. Churchyard, and he was working undercover."

Harding says Snowden had a relatively junior role responsible for computer security, but as he became more experienced, he worked his way up the intelligence community ladder. "By the time he arrives in Japan he's working as a contractor for the NSA (National Security Agency) and he's giving lectures to the Department of Defence about cyber-security and how to protect your top secret information from Chinese attack."

But Snowden was no James Bond. "That's not where spying is these days," Harding says. "Spying is about signals intelligence, which is what the NSA does, it's about hoovering [vacuuming up] your adversaries' communications and keeping your own communications safe from other people trying to steal them."

Harding says the whole Snowden debacle raises still unanswered questions. "How can a 29-year-old sitting in Hawaii download as many as 1.7 million top secret NSA documents and nobody notices. I mean this is probably the most embarrassing moment in the history of American intelligence. "

There's much speculation about how Snowden managed to carry out his project without detection. But there's little doubt that if Snowden returned to the US, he would face a lengthy jail term. Harding says Snowden doesn't want to share a similar fate as Chelsea Manning who was sentenced to 35 years in jail for leaking classified material to WikiLeaks.

"By granting his first-ever television interview after a year in Moscow, Snowden is trying to change the perception of him. There's a strategy at work here. For the first six months, Snowden was invisible in Russia. He really didn't meet anyone at all, he sort of vanished. Now I think his medium- to long-term strategy is to do more interviews, to try to create a political climate in the US which is more sympathetic to him and ultimately get a deal — if not with this administration then perhaps with the next administration — where he can come back to the US, maybe serve a short sentence, and ultimately be home and be free."