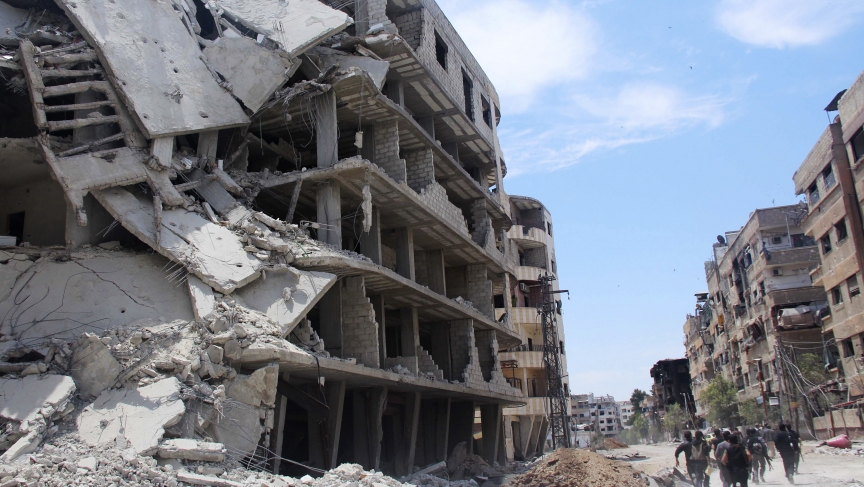 Rebel fighters carry their weapons as they run past damaged buildings to avoid snipers loyal to Syria's President Bashar al-Assad in the Mleha suburb of Damascus on May 26, 2014.

President Barack Obama used his commencement speech at the West Point military academy on Wednesday to highlight his view of war-torn Syria as a potential terrorist threat.

“As the Syrian civil war spills across borders, the capacity of battle-hardened extremist groups to come after us only increases,” Obama said. “But that does not mean we shouldn't help the Syrian people stand up against a dictator who bombs and starves his own people."

“Regional aggression,” the president said, “will ultimately impact our allies and could draw in our military. We can't ignore what happens beyond our boundaries.”

Still, Obama did not repeat his statement from August 2011, when he said, the time had come for President Bashar al-Assad to step down. Nor did he mention the deal brokered by the US and Russia to get rid of the Syrian government's stockpiles of chemical weapons.

In his call for more support — from Congress and from US allies — to be directed toward moderate Syrian rebels groups fighting to oust Assad, Obama mentioned the importance of “helping those who fight for the right of all Syrians to choose their own future.”

By doing that, the president said the US would also be "pushing back against the growing number of extremists who find safe haven in the chaos [in Syria].”

Some listening to Obama's speech heard hints of a shift in strategy.

“He seems to be signaling a potentially significant change in Syrian policy,” said Fredric Hof, who served as President Obama's special representative for Syria in 2012. “But without spelling out in great detail what [that change] is exactly, or pledging that he would try to do something big enough to alter the situation on the ground decisively [in Syria].”

Obama said Syria would be a crucial focus for a new counter-terrorism effort he is asking Congress to fund — to the tune of up to $5 billion. He said the program would work against extremism in a host of countries, including Libya, Mali, Somalia and Yemen. But in the case of Syria, the president said, the US would help “Jordan and Lebanon, Turkey and Iraq, as they contend with refugees and confront terrorists working across Syria's borders.”

“I will work with Congress,” Obama went on to say, “to ramp up support for those in the Syrian opposition who offer the best alternative to terrorists and brutal dictators.”

There are other indications that the Obama administration intends to step up lethal assistance for moderate Syrian rebel groups. Recent reports say the US been covertly training small groups of rebels from Syria at camps in Jordan and in Qatar, and it has given a green light to regional US allies to transfer American-made anti-tank missiles to vetted opposition groups.

But Jeff White of the Washington Institute for Near East Policy is skeptical that big changes to the US approach on Syria are in the works. “We have seen some shift. The question is, how big a shift? Is it going to move to a full train-and-equip program?”

“My view on this has always been that we need to see the proof on the ground,” White said. And that's not so apparent just yet, he suggested.

“$5 billion [for counter-terrorism] is not chump change,” he said. “But [Obama] was so general on Syria.”