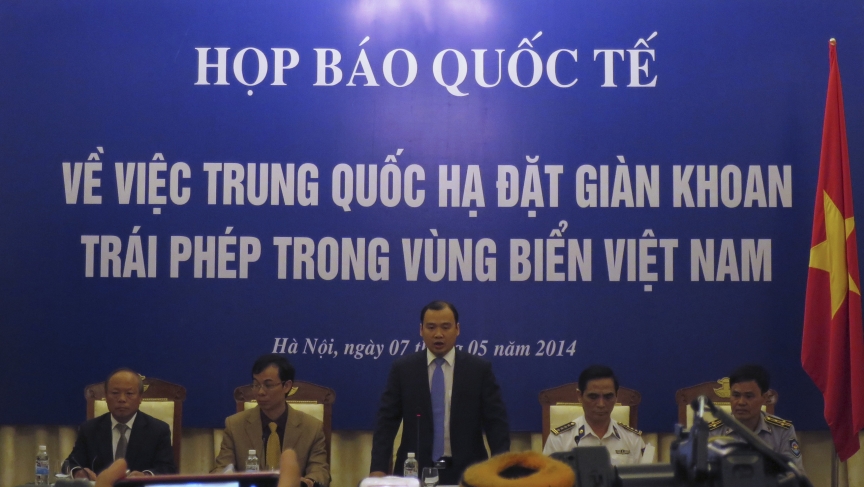 Vietnam government spokesman Le Hai Binh (C) speaks at a news conference on the deployment of a Chinese oil rig in a part of the disputed South China Sea, in Hanoi May 7, 2014.

A combined total of more than 100 ships from China and Vietnam are engaged in a tense standoff in the resource rich shipping lanes of Southeast Asia.

Legal ownership of over most of the South China Sea has long been in dispute, but this latest conflagration between China and Vietnam represents the most serious escalation in years between the two Asian rivals with overlapping territorial claims.

Late last week, China's state-owned national oil company sent a giant oil rig into waters off the coast of Vietnam. Beijing said it has every right to drill for oil in an area controlled by China since the 1970s. But Vietnam took offense, and neither side is showing much willingness to back down.

On Wednesday, Vietnamese officials said ships they sent to the area were rammed by Chinese vessels and blasted with high-powered water cannons. They said six Vietnamese personnel were injured in the clash. Officials made the claims during a news conference in Hanoi, where they presented video evidence aimed to portray China as the aggressor.

China denies all of this, saying the Vietnamese side is the one guilty of aggression and demanding that Vietnam pull its maritime forces back.

The competition for control over parts of the South China Sea near the Paracel and Spratley Islands goes back hundreds of years.

China, the Philippines, Taiwan and Vietnam all make claims to parts of these waters that are strategically important for international shipping and fishing, as well as oil and natural gas deposits. Last year, ExxonMobil signed a $20 billion energy deal with Vietnam.

Experts see the rising tensions as an inevitable result of a rising China. And some believe there is the potential, if things spin out of control, for a major international conflict.

China has a legal argument for its decision to place an oil rig into this disputed area off the coast of Vietnam. But it might be a flimsy one.

“China is throwing gasoline on the fire,” says Michael McDevitt, a retired admiral with the U.S. Navy and senior fellow with the CNA Corporation. McDevitt points out that the Obama administration is not criticizing China on a legal basis, but for taking provocative and unilateral action.

“This is not a helpful way to resolve disputes in terms of maritime sovereignty claims,” McDevitt says

McDevitt adds that China's moves were surprising in light of the fact that Beijing has signed an agreement with Vietnam to deal with territorial disputes through peaceful negotiations.

In a statement, US State Department spokeswoman Jen Psaki laid blame for the standoff squarely on China. “This unilateral action appears to be part of a broader pattern of Chinese behavior to advance its claims over disputed territory in a manner that undermines peace and stability in the region,” Psaki said.