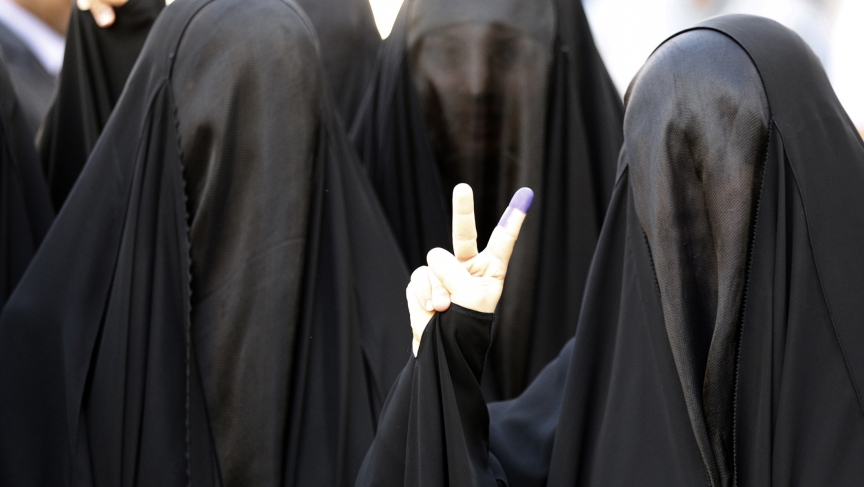 A woman in Baghdad shows her ink-stained finger after voting in the Iraqi presidential elections.

The purple finger is back. Iraqis went to the polls Wednesday to vote in parliamentary elections, and once again voters are holding up ink-stained fingers as a sign of pride.

“It’s still a sign that this is a new Iraq,” says Jane Arraf, Baghdad correspondent for Al Jazeera America and the Christian Science Monitor. Arraf says it shows the country “has the chance to be a much better Iraq than it was under Saddam Hussein.”

The purple finger first came to international prominence in Iraq’s first national election in January 2005. Pictures flashed around the world of smiling voters holding up their fingers with pride during Iraq’s first free election.

This is Iraq’s fifth set of elections since the downfall of Saddam Hussein. While it went well, there wasn't quite the same sense of jubilation.

Sunni extremists had threatened to kill anyone who voted. Security was extremely tight. Even Iraq’s airspace was closed and all flights were cancelled.

Nonetheless, hundreds died in violence before the election. The cities of Ramadi and Fallujah remain in open revolt. Many Sunnis feel marginalized and excluded from power.

But Arraf says the power struggle in Iraq is not just between Sunni and Shia Muslims. “It’s really a struggle for the soul of what this country will become,” she says. “And by that, I mean, will it be a democracy? Will it be the kind of place where officials continue to steal money, and the people get crumbs? Will it be a place where it’s safe to walk on the streets?”

Baghdad resident Sahar Issa voted Wednesday, but she says she was discouraged by the turnout in her neighborhood.

"The polling station was really empty. The atmosphere was very cool. People didn't seem to be very enthusiastic and there were much fewer people than I've ever seen before at polling stations," Issa says. She attributes the low turnout to the difficulties facing Iraqi voters, especially, she says, Sunni residents who are dealing with the ongoing conflict with insurgents in Anbar province and flooding around Baghdad.

Issa hopes that the winner of today's vote might build a more inclusive coalition and a truly national platform that will reach out to Iraqis who feel disenfranchised. And, she says, a lot is riding on the results.

Despite the difficulties, she says some Iraqis remain committed to building a real democracy.

"We have taken our fingers, we have put them in the purple ink, we have put our little ticks," Issa says. "We are hoping for the best and willing to cheer on anyone who is willing to take the load and unite  the people."