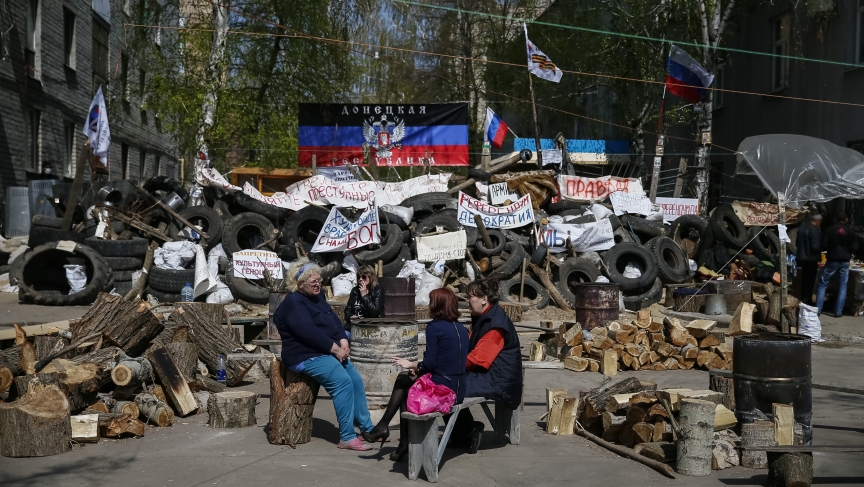 Pro-Russian protesters sit near barricades at the police headquarters in the eastern Ukrainian town of Slaviansk April 18, 2014. The self-declared leader of pro-Russian separatists in eastern Ukraine, Denis Pushilin, on Friday said that he did not consider his men to be bound by an agreement between Russia and Ukraine to disarm and vacate occupied buildings.

After weeks of confrontations, annexations and outraged rhetoric in the United Nations Security Council, four-way negotiations to end the crisis between Russia and Ukraine began in Geneva Thursday.

Officials from the United States, Russia, Ukraine and the European Union held the first high-level talks between the four parties since the political crisis began. And there was an agreement to de-escalate the conflict — a bit.

The talks took place as a Ukrainian military mission to dislodge pro-Kremlin militants in eastern Ukraine stalled. Earlier this week, three pro-Russian protesters were killed and 13 others wounded in the city of Mariupol when protesters stormed a base being used by the Ukrainian National Guard. The interim Ukrainian government called it the most lethal clash thus far.

In recent days, Russia has mobilized troops along the border with Ukraine, and Thursday Russian President Vladimir Putin reasserted he has the authority to deploy military force into Ukraine, if needed. He repeatedly referred to the eastern territory of Ukraine as “new Russia,” adding that only "God knows" why it became part of Ukraine. Edward Lucas, senior editor at The Economist and author of new book called "The New Cold War," says Putin's comments are directed toward the international community.

"This is clearly not a message for a domestic audience alone," says Lucas. "Certainly, Russians are thrilled by what's going on in Ukraine. They feel that this is the end of a period of humiliation that started with the collapse of the Soviet Union, and the Kremlin propaganda machine has quite successfully stoked a kind of nationalist frenzy inside Russia."

Lucas says Kremlin-backed media seek to paint those who run Ukraine as fascist nationalists who are key figures in a larger Western plot. He adds that Putin's use of the term "new Russia" is actually nothing new—it's a term from the colonial era when the region was first conquered by the Russian tsarist empire.

"I find that very sinister," Lucas adds. "I also find sinister the way in which he says that Russia has a right to go into Ukraine if it wants — countries don't have rights to go into other countries' territory unless they have a Security Council resolution or unless there's some grave humanitarian catastrophe or emergency. That's not happening, but Mr. Putin is doing his best to make it happen."

Lucas says President Putin is feigning concern for ethnic Russians in Ukraine and using that alleged concern as a reason to acquire more territory and power.

"I think it is absolutely preposterous for anyone to maintain that Russia actually cares about these ethnic Russians in other countries," he says. "He showed no interest in them in the over 15 years that he's been in power, except for a kind of stage army, which he can call on as an example of grievance and oppression, but there's no real sympathy or sentiment for them."

While the West continues to push the diplomatic process and impose sanctions, Lucas says the Kremlin sees a gap between action and words.

"We are not willing to accept economic pain and we're not willing to threaten the use of force," he says. "As long as he's willing to do both of them, he's got the upper hand and he's calling our bluff in a way that I find terrifying. I think we're heading for a really unpleasant confrontation."

As it stands now, Lucas says if things continue down this path, Ukraine may become a landlocked nation that is deprived of its centers of industry — which lie in the country's eastern and southern regions. The European Union and the United States would have top dea with propping up what's left.

Lucas says that he predicted this "new Cold War" back in 2007, because he saw Russia's economic influence in the West was going up; that the Kremlin's desire to meddle in its neighbors' affairs was unabated and the West was unwilling to accept the economic consequences of pushing back — even if there was a desire to do so.

"We're in a really difficult position here," he says. "The whole post-war security order, which has made us here in Europe and you in America and everyone else feel more or less safe and free, is being challenged by what's essentially a rouge state that has no interest in this post-war order and thinks it's totally unfair."

When looking back in history, Lucas says today's tensions share elements with the start of World War I in 1914, and the early days of World War II when Austria was annexed by Germany in 1939.

"This idea of the gathering of the Russian lands is a very sinister phrase that the Kremlin uses and rather like Hitler's approach to the ethnic Germans who were left outside Germany by the Treaty of Versailles," says Lucas. "You've also got the kind of ideological competition of the Cold War. Mr. Putin is very clearly now articulating a different version of civilization based on autocracy, the Orthodox Church and Russia's historical destiny."

Lucas says the West may be underestimating Putin, but as of now, he sees no constructive way out of this conflict.

"Russia is very good at using diplomatic process as a way of tying us up in knots," he says. "If you look back at the way Russia does things, they use talks as a kind of distraction or camouflage while they create facts on the ground and that's what they're doing right now. My expectations of these [Geneva] talks are extremely modest. I think now's the time to be putting very tough sanctions on Russia."

While the US has imposed some sanctions, Lucas says there is much more that can be done to raise the cost of doing business with Russia, like introducing visa bans, starting money laundering investigations, freezing assets and trying to cut off the access Russian energy companies have to the global financial markets.

"At the moment, (Putin) just does not think we're serious, and as long as he thinks that, he's going to continue," he says. "That's when we get the apocalypse, because my great fear is he tries something in the Baltic States and then very late in the day we try to stop him. We then have a choice of either the end of NATO, or risking World War III — that's a choice I hope we never have to face."