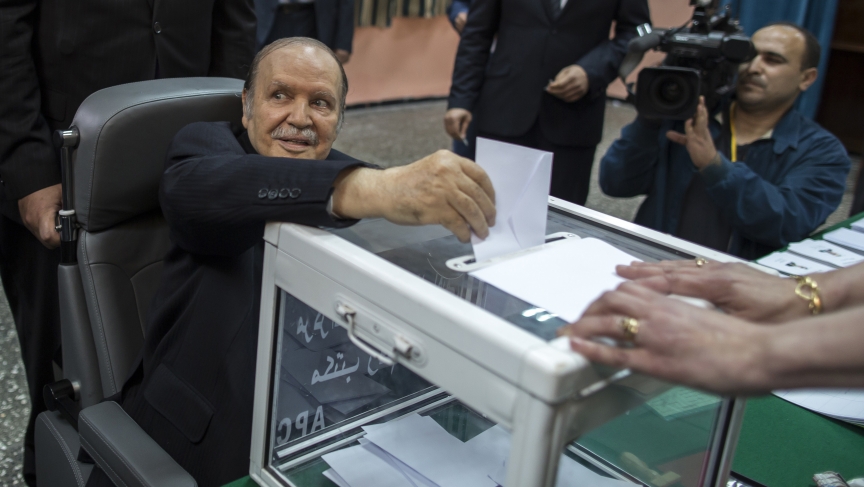 Algeria's President Abdelaziz Bouteflika casts his ballot during the presidential election in Algiers April 17, 2014. Bouteflika is expected to win after 15 years in power, despite speaking only rarely in public since suffering a stroke in 2013.

It’s Election Day in Algeria, but you’d hardly know it.

While the cafes in the capital Algiers are brimming with people, the polling booths are relatively empty. The approximately 23 million registered voters are more or less apathetic, because many believe the winner is a foregone conclusion.

Ask most Algerians on the streets today, cab drivers, shop keepers, retirees, students, why they're not voting and you’ll get the same answer. Mohammed in Algiers puts it succinctly: “It’s all a big game, and the people have no choice in it," he says.

Just about everyone here in Algeria expects current President Abdelaziz Bouteflika will run roughshod over his competitors. The 77-year old was first elected in 1999. Nearly ten years later, he scrapped constitutional term limits so he could run for a third, and now a fourth five-year term. But that’s not what people are angry about.

Bouteflika suffered a stroke last April that’s left him visibly incapacitated, and since then he’s rarely appeared in public. This morning, with cameras snapping, the president was wheeled into a voting booth to cast his ballot. The image of the ailing man being pushed in a wheelchair evoked the movie “Weekend at Bernie’s,” where a dead boss is propped up and paraded around by his handlers.

"You can have a comedy of democracy, but people know it is comedy. We have never, never had real elections," says Mustapha Benfodil, a poet, playwright and award-winning writer in Algeria. While many Algerians acknowledge Bouteflika brought peace and stability to the country after a bloody civil war with Islamist militants in the 1990s, they say that Bouteflika is long gone. In his place is a group of mysterious men, running things behind the scenes.

This sense of omnipotent and ubiquitous rule is embodied in the term Algerians use to refer to the regime — the pouvoir, or "the power".

"We feel there is a big gap in society between the political system and people," Benfodil says. "The word 'Barakat,' everybody is now repeating it, it's become a new slogan."

“Barakat,” Arabic for enough, is a new protest movement that sprung up in recent months, calling for a boycott of the elections. Benfodil, along with a diverse group of writers, artists and intellectuals, is one of its founding members. At a non-violent protest in the heart of Algiers Wednesday, police cracked down on Barakat protesters, arresting, and later releasing, dozens. Benfodil was one of many activists beaten up by police during the sit-in. Amna Gulleli, a North Africa researcher from Human Rights Watch, says in the lead-up to the election, Algerian authorities have cracked down particularly hard on any form of dissent.

"[Barakat] have been subjected to harsh attacks from the government, who is portraying them as trying to destabilize Algeria and as receiving orders from Western countries. This is very sensitive to Algerians, who are wary of the stability of the country," Gulleli says. "The reason behind these tactics is to send a message to the general populations who now don't dare go out to demonstrate."

The government’s tactics seem to have worked. Barakat has remained a popular, but small-scale protest movement, and it will likely stay that way, at least in the short term. Most people in Algeria these days are skeptical of the political system itself. They don’t trust the regime, or the opposition.

"There are two confronting views in Algeria to the kind of change the country may experience," says Amel Boubekeur, a fellow at the German Institute for International and Security Affairs. "There are some people that say: leave us alone, we are fine, the regime will gradually change from the inside, we don't need a revolution that will change a fragile peace that we have been building for 20 years. But then there is a rising view among young people who say: I do not have a job, I'm unemployed, there is no way for me to get married before I'm 50, I need my life to change! They say, even if I don't call for the fall of the regime, I need them to listen to my demands, and to stop ruling as if I don't exist."

The irony is that if those young Algerians did turn out en masse to vote, they could likely change the results. And they could do it without an Arab Spring, bloodshed or civil war, just an exercise in democracy. The 2012 Algerian parliamentary elections are a testament to that. The National Democratic Institute, an American NGO that monitors elections around the world, concluded that while there were problems and irregularities with the elections, they saw no evidence of flagrant fraud. The NDI report also concluded that "a deep mistrust characterizes many Algerians’ attitudes toward the electoral process."

It is this perception of rampant fraud and corruption that is enough to keep the majority of Algerians away from the polls.

The results of Thursday's elections may be a foregone conclusion to most in Algeria, but writer Benfodil says he’s hopeful that the victory of a clearly incapacitated president may spur his fellow Algerians to some sort of political action. "I think we are living a fantastic moment, even if it is hard, even if it is complicated," he says. "I think that after this period we'll maybe see a new kind of citizen emerge."