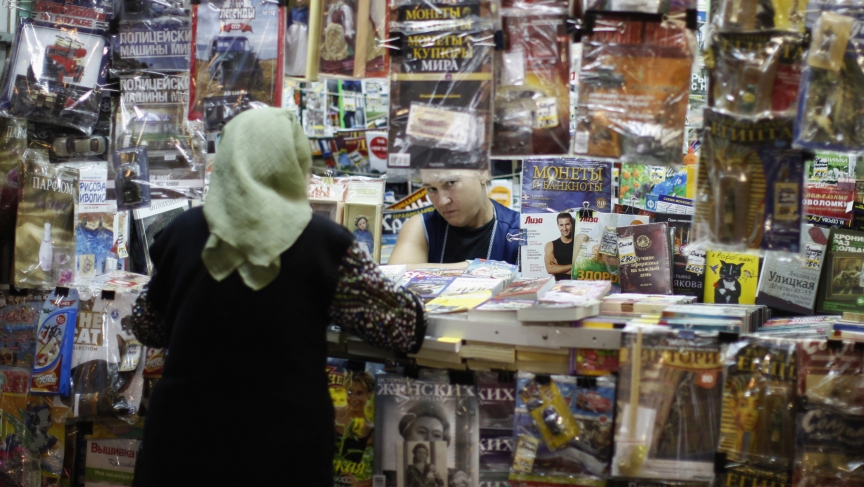 A woman works at a news-stand in the Moscow metro.

Lately, it seems there's been a lot of news about, well, the Russian news.

Weeks ago, an anchor from the Russian news service RT called it quits on air. And last week, a voice that you might recognize from our show, Journalist Natalia Antonova, stepped down as an editor at the Moscow News after four years.

Her news comes as the paper undergoes major shifts in leadership.

In December, the parent-company of the Moscow News, RIA Novosti was liquidated by presidential decree, along with the state-run radio station, Golos Rossii (Voice of Russia). RIA Novosti and Golos Rossii will now be combined into a single news agency under the newly appointed leadership of conservative news anchor Dmitry Kiselyov.

Kiselyov is a controversial figure in the Russian media, known for his provocative statements. He recently appeared on Russian television spouting anti-American rhetoric.

“Now, he’s tasked with running this news agency that is supposed to create a very positive image of Russia abroad and to bring the message home that, as he put it, ‘An important country with good intentions,’” Antonova said.

To be clear, RIA Novosti and the Moscow News were funded by the Kremlin long before the liquidation, but according to Antonova, that funding didn’t intrude on the editorial content of the paper.

“We were never told, ‘You can write this, but you can’t write that,’” Antonova said. “Now for their state money, they want to see something different and it’s not the kind of product that we were making.”

However, she feels the climate in the Russian press is changing. In her farewell op-ed, Antonova listed 10 pieces of advice for journalists working in Russia. Number seven is perhaps the most fitting for her current situation.

“Keep your eye on the line between skepticism and cynicism. When that line begins to blur, it's time for a vacation featuring a beach and cocktails with umbrellas."

Antonova, who is Ukrainian by birth, will be returning to Kiev. There are beaches there, along the Dnieper River. While she intends to take a break from journalism and work on fiction writing, she hopes to eventually go back to reporting in Russia.

“I see it as a very interesting place in spite of all the latest turmoil that’s been happening lately,” Antonova added.