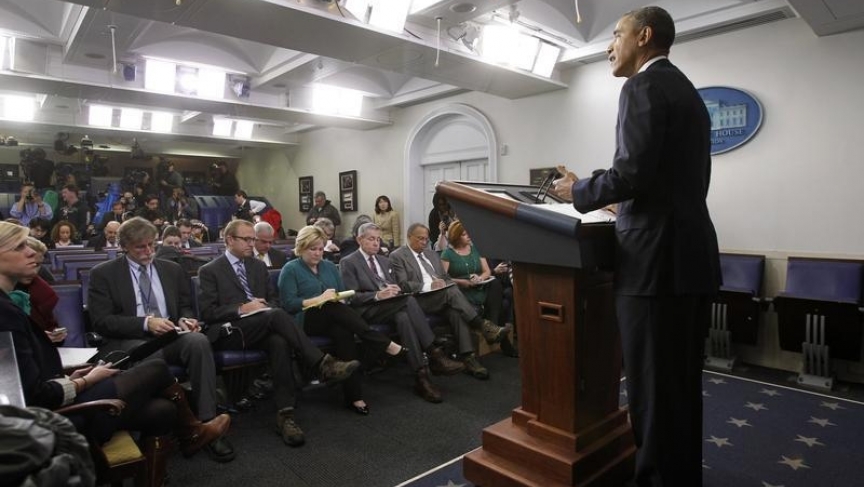 US President Barack Obama speaks to reporters about the crisis in Ukraine from the Briefing Room of the White House in Washington March 17, 2014.

The United States and the European Union have imposed targeted sanctions on key Russian and Ukrainian officials connected with Moscow's intervention in Crimea.

"We are imposing sanctions on specific individuals responsible for undermining the sovereignty, territorial integrity and government of Ukraine. We're making it clear that there are consequences for their actions," he said.

"Second, I have signed a new executive order that expands the scope of our sanctions.  As an initial step I'm authorizing sanctions on Russian officials, entities operating in the arms sector in Russia and individuals who provide material support to senior officials of the Russian government. And if Russia continues to interfere in Ukraine, we stand ready to impose further sanctions."

But if Obama was hoping his sanctions would have some sort of impact, he was quickly disappointed. Shortly after President Obama's announcement, Russian President Vladimir Putin signed an order recognizing Crimea as an independent and sovereign state, effective immediately.

"[Sanctions] are the non-military tools of choice in these kinds of situations and they don't have an immediate effect," said former State Department spokesman PJ Crowley. "This is a tool that can add meaningful pressure, over time. We saw that in the case of sanctions against Iran. Those have worked in that context, but obviously it took a number of years for the pressure to really add up, where Iran felt it needed to come back to the negotiating table."

"Then there's this critical question for Europe," said Crowley. "Are they willing to bear a meaningful economic burden themselves? Because sanctions will ultimately affect Russia the most, but obviously, in terms of the European reliance on Russian energy sources, this will also have consequences for Europe as a whole. In essence, does old Europe, is it willing to bear a meaningful cost to defend new Europe?"

Crowley, now a professor at George Washington University, said it is Putin who has the next move in this political chess game.

"I think the critical piece is, does Putin stop here? He's already gained what he really wanted, first and foremost, which is to re-establish leverage over a revolution that was spinning out of Russia's control and threatening Russia's regional interests," Crowley said.

"If Putin moves further into Ukraine, and threatens the sovereign existence of Ukraine itself, he's really now challenging the post-Cold War system and the post-Cold War structures that we've built up over the past 25 years. And that becomes a much different game."