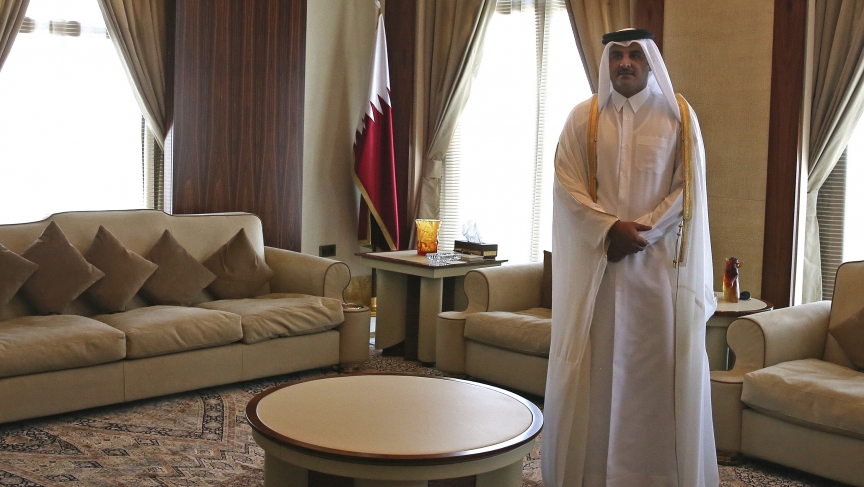 Qatar's Emir Sheikh Tamim bin Hamad waits for the arrival of US Secretary of Defense Chuck Hagel in Doha. The current emir, 33, has been in office since June 2013.

Qatar is one of six members of the Gulf Cooperation Council, but lately, the group hasn’t been keen on cooperation.

Saudi Arabia, the United Arab Emirates and Bahrain all recently withdrew their ambassadors from Qatar. Journalists from Saudi Arabia and UAE working in Dubai were also asked to resign from their posts, and some have obliged. Meanwhile, the other two member countries, Kuwait and Oman, have been silent regarding the matter.

Publicly, the three countries claim they're upset with Qatar because the counry didn't sign an agreement that would prevent meddling in the internal affairs of other countries. Saudi Arabia, though, has taken things a step further, which may help explain what's really behind this schism in the gulf group.

Saudi officials recently declared the Muslim Brotherhood in Egypt to be a terrorist organization — and Qatar supports the brotherhood, both financially and ideologically.

Dubai residents aren’t too worried, but they are a bit confused, and speculation at this point is rife.

“If you ask 10 different people their thoughts, you’ll get 10 different opinions,” said Omar Chatriwala, a journalist and co-founder of DohaNews, a community news website.

One theory is this series of diplomatic moves is actually a test for the emir, Sheikh Tamim bin Hamad al Thani, who took office in June 2013.

“When Hamad [the former emir] took power back in '95, then he was faced with the same test as well, in terms of his leadership and his ability to hold on to power,” Chatriwala said.

Another reason some thing Saudi Arabia is willing to provoke Qatar is Sheik Tamim’s age. He’s 33, and most of Saudi Arabia’s ruling elite are in their 80's.

“Not to mention that Saudi Arabia does see itself as a regional powerhouse, as potentially one of the most powerful, with the most resources at its disposal,” Chatriwala said. “To have this little country that is much smaller, has a very young leadership, acting out of line, isn’t necessarily going to sit well with everybody.”

Chatriwala isn’t worried about possible repercussions. “There might be some sort of passive aggressive reaction,” he said. "It might be a case whereby trucks are held at the border for a day or so, so that the freshest food or the freshest produce isn’t coming in."

“We did contact the US Embassy for comment and they said ‘we’re not terribly concerned about things yet. We’re not issuing warnings for Americans to stay clear, or anything like that,'" Chatriwala added.

The US has a military base in Qatar, and several American companies operate in the country. It also have close ties with Saudi Arabia. “I am sure they would be on the side of, 'we don’t want things to escalate,'” Chatriwala said.