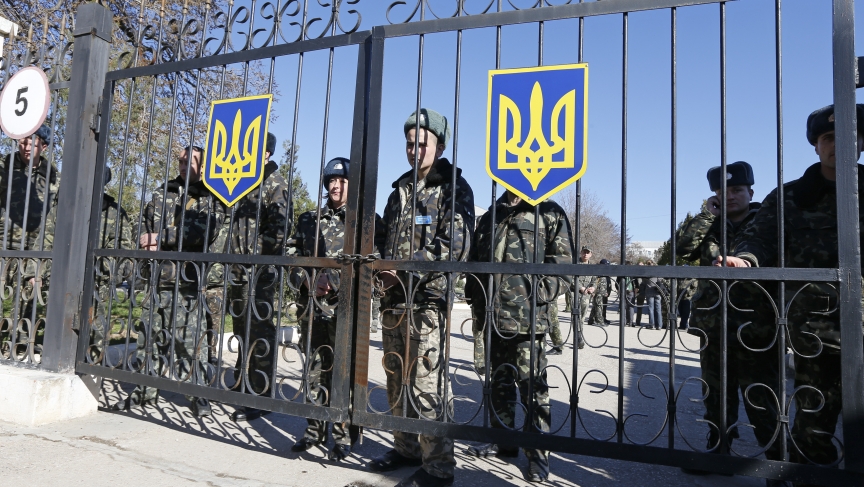 Ukrainian servicemen and a servicewoman gather at the gate of one of their bases in the village of Lyubimovka, about 50 miles southwest of Simferopol, Crimea's capital, on March 3, 2014.

What's at stake for the US in Ukraine and what options does the US have to pressure Russia? Those are questions on the minds of US leader as the Russian military intervention in Crimea continues.

Brigadier  General Kevin Ryan (Ret.) was a defense attaché in the American Embassy in Moscow and now directs Defense and Intelligence Projects at Harvard’s Belfer Center for Science and International Affairs.  He believes Washington's interests in Ukraine and Crimea must be long range.

"Russia owning this land does not really give it much of a strategic advantage over what it had before. It had a naval base there ... that allows Russia to have a presence in the Black Sea, which is a much smaller bathtub than the other oceans," he says. "But it's the longer term implications that NATO and the US will be thinking about. Russia has, in the past, taken back some enclaves, largely ethnic areas in Georgia and South Ossetia, now Crimea. And let's not forget there are other, similar enclaves in other places — such as the Baltics."

Russia’s pattern of behavior, he says, is troubling to the US and NATO. The rhetoric coming from Washington may sound weak, but "this is the card that the US has left. There is no military option for what's going on in the Crimea. The same holds true for NATO.

"NATO spent the last 24 years telling Russia it was not countering Russia, that the Cold War was over, that Russia is no longer the focus of NATO. Well, the truth of those claims is evident today. NATO cannot do anything about this militarily, nor do I necessarily advise doing anything militarily."

Instead, Ryan says the US emphasis will likely be on pulling diplomatic and economic levers.

"If Russia is an oligarch-run state, if it's corrupt and reliant on the networks of patronage and money, then economic levers are major. If the ruble tanks, if the oligarchs with their investments in the West and their money in the banks are suddenly treated like the Iranians, and their monies are cut-off or restricted, this will put a great deal of pressure on the people who support Putin and on Putin himself," he says.

Over time, Ryan adds, economic sanctions might allow the US and NATO to put pressure on Russia in the Crimea.

For now, Ryan says the statements from Russia's foreign minister are ambiguous.

"Russia's foreign minister said that Russia's troops would be deployed in Crimea until the situation stabilizes. You can interpret this statement in a way that says, ‘if we can all agree that the situation is stabilized, then Russian troops may go back to their bases.’ It doesn't necessarily mean that Crimea's not marching toward a referendum to greater autonomy from Ukraine, nor that Russia would withdraw all of its troops, but what it could mean is that there's a way out of this," Ryan argues.

"On the other hand, if Russia is leaving troops in Crimea not just until the situation stabilizes, but while the ethnic Russians are threatened by the so-called hooligans who took power in Kiev, well, this is an open-ended time because those people are not leaving Kiev, and that means Russian troops could be there for a long time."