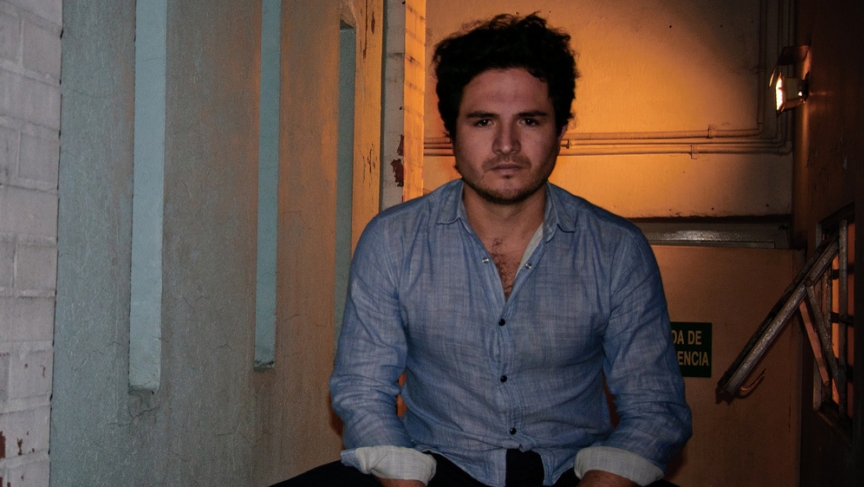 Santiago Ramírez at the Real Sound Studio in Bogota, where they compose jingles for political candidates. He says they once had a conservative client, a Colombian Mitt Romney-type, who asked for a raunchy reggaeton tune so he could connect with young voters. The client wound up losing the race.

What do you do when you’re one among thousands of candidates on the ballot? In Colombia, you hire a jingle writer.

At a sound studio in Bogota, Juan Fonseca is composing a 15-second radio spot for a Colombian congressional candidate.

Radio reaches more people in Colombia than newspapers or TV, which is why a well-crafted jingle, played over and over on the radio, can help a campaign take off. But composing these ditties is a strange and tricky art form.

Santiago Ramirez of Bogota's Real Sound studio recalls a button-down conservative -- a sort-of Colombian Mitt Romney -- who thought he could connect to younger voters by setting his jingle to raunchy, sexually explicit reggaeton.

"We were like 'What? Do you really want a reggaeton?” Ramirez says.

Ramirez did ultimately produce the jingle, and the candidate lost.

Another challenge for jingle composers is politicians who have strange names that are hard to rhyme.

"We're working with a guy whose name is very weird. It's ‘Telesforo.’  It's very similar to phone, you know, telefono,” he says.

When I ask him who names their kid Telesforo, he laughs and says, "I don't know, man. A very crazy guy."

Still, Ramirez says numbers are even more important than names. He plays me a song where there’s no name. The spot simply urges people to vote for candidate No.101. There’s a good reason for that.

Unlike US legislative races, which are mostly one-on-one contests, Colombia's are a free-for-all. A whopping 2,300 candidates are running for 285 seats in the Colombian House and Senate.

As a result, the ballot for the March 9th election is the size of a newspaper. But it still isn't big enough to hold so many names. Instead, each candidate is assigned a number and that's what appears on the ballot.

"In Colombia when you go to vote, you have to mark with an "X" the number of the candidate. That's super important," says Miguel de Narvaez, who runs a recording studio called Sonido Comericial.

Narvaez says a good melody or chorus can implant the candidate's number in the voter's brain. Jingle writers prefer small numbers because they're easier to rhyme.

"No! 172? That would make it very difficult,” Narvaez says. “Probably what we would do here would be to split the number.” He starts singing, “1-7-2” instead of “one-hundred-and-seventy-two.”

When we meet up again, Juan Fonseca, the piano man, has finished the jingle for his client, a congressional candidate named Monica Giraldo. Rather than reggaeton, Giraldo requested a more innocent sound, so Fonseca brought in a teenager to sing the vocal tracks.

Giraldo, of the Conservative Party, is listed as C-102 on the ballot, but Fonseca resists playing the numbers game. In the end politics is all about people, so Fonseca tried to make an emotional connection with voters by focusing on Giraldo's human qualities.

"She is a person with leadership skills, who puts her heart into her work," he says. "All of these attributes make her much more than just candidate number C-102.”