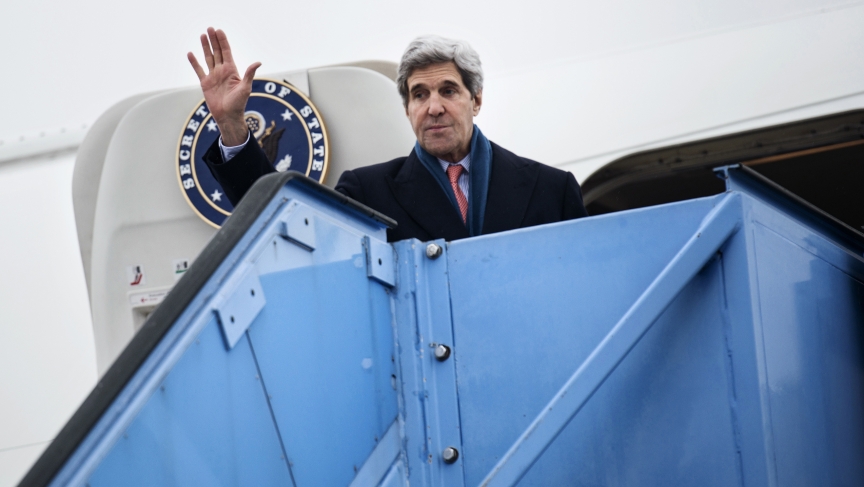 US Secretary of State John Kerry waves while boarding his plane at Franz-Josef-Strauss Airport in Munich, southern Germany, February 2, 2014.

Secretary of State John Kerry had an ambitious first year as America’s top diplomat. He traveled more than 320,000 miles.

He's on pace to become the most traveled Secretary of State in history — a title he'd take from his immediate predecessor, Hillary Clinton, who traveled so much she even earned the moniker the Secretary of Schlep from Foreign Policy.

But doing the diplomatic dance requires multiple players to dance with you. The Middle East peace deal is just one area.

Another is Syria. The country’s civil war continues. The deal to eliminate its stockpile of chemical weapons is in limbo. There are currently talks starting in Geneva to try and find a solution to the violence.

But previous talks failed. The one constant is that Kerry is right there in the middle of it all as the diplomatic face of the US.

Kim Ghattas is there, too, covering Kerry for the BBC. She says Syria is a good example of the difficulties of diplomacy.

“Mr. Kerry’s diplomacy in Syria is limited by what America’s allies and foes are willing to do, or what they see as the right diplomatic course,” she says. “You have the Russians, who are not willing, for example, to support a resolution at the United Nations calling on Syria to allow humanitarian aid to enter towns and cities like Homs.”

Ghattas says Kerry must also deal with the opinion of the Saudis who want the US to do more, even if that means a military strike. Competing agendas are just part of life for Kerry.

And he must manage that, while serving the agenda of President Barack Obama, a man who has been very cautious in dealing with Syria.

“I would have to say that John Kerry as secretary of state is probably somewhat frustrated, but doing the best he can and putting a brave face on it,” she says.