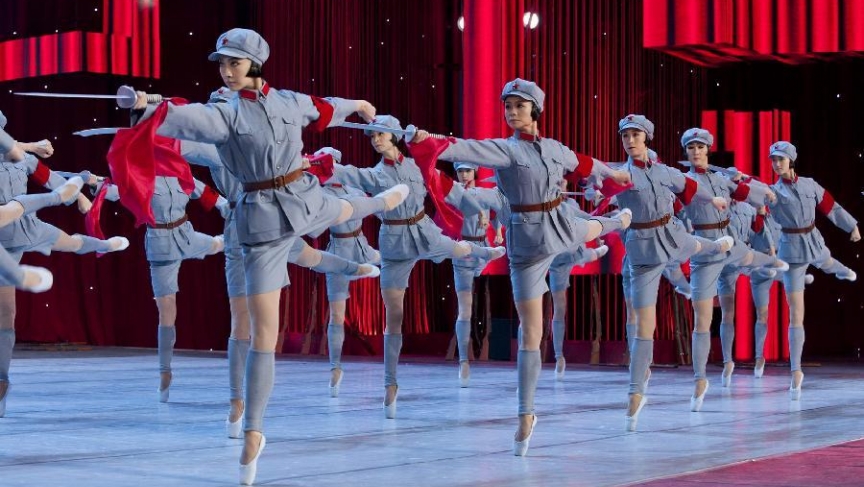 In the US, today's Super Bowl is the TV event of the year, drawing unparalleled crowds. But in China, the year's biggest TV happening is China Central Television's Spring Festival Gala celebrating the Chinese New Year.

Known in Mandarin as Chunwan, the variety show regularly draws tens of millions of viewers every year and has become an essential part of celebrations for the New Year since its start three decades ago. The South China Morning Post reported that 750 million Chinese watched the gala last year, more than six times the viewership of the Super Bowl in America.

But its popularity has dwindled in recent years. This year's nearly five-hour-long event on January 30, 2014, consisting of stand-up comedy, dancing, singing, magic and other performances, drove home the themes of the Chinese Dream — an idea promoting hard work and collective effort for the prosperity of China. The television show also struck the tone of nostalgia for the country's red past.

The show was never short on rosy language. For example, a song titled “I am not too demanding” performed by a popular comedian tells of a comfortable middle-class life as representing the Chinese Dream:

"I have an 80 square-meter house and a gentle wife. Our kid already finished college and secured a great job right after graduation. I commute between my workplace and home quite smoothly, rush hour is non-existent. I exercise outdoors and see the blue sky every day.

Pensions and health care are not problems because they will be covered by the government. This is my Chinese Dream, it’s small and simple. I am not striving to become a dragon or a phoenix. Instead, I want to be immersed in happiness. It’s easily attainable by standing on your tiptoes."

The backdrop behind the performance displayed the vast landscape of China, complete with newly-built rural houses and showcase infrastructure projects — all packaged to represent the Chinese Dream, a phrase coined by President Xi Jinping which is frequently evoked in media discourse and official speeches.

In addition to the theme of the China Dream, a session was devoted to the Chinese Communist Party's revolution history. The performance of the Red Detachment of Women, a Chinese ballet set in the 1930s, made its debut during the show at a time when the legacy of red culture remains a contentious issue in China. The storyline follows peasants-turned-female soldiers’ devotion to communism:

The political underpinnings are subtle but pervasive — in the words of the hosts, and reflected in the choreography. These messages lacing the performances are ordered from above — in an earlier visit to Central China Television (CCTV), Minister of the Central Propaganda Department Liu Qibao urged that the gala should “spread positive energy” and promote “the rhythm of our era — the Chinese Dream”.

However, the gala is losing its magic spell on ordinary people. According to a recent survey, nearly 60 percent of the viewers were extremely disappointed in the program this year, particularly with the reduced number of stand-up comedy routines, which usually mock social happenings. The news of Cui Jian's pullout of the show caused the gala's reputation to take a hit. He reportedly quit after refusing to comply with censorship requirements for his songs.

The comments trickled in as the gala was underway, and the topic remained trending as of the morning of January 31. Microbloggers in China have been largely critical of this year's show. Editor-in-Chief for the Financial Times Chinese Zhang Lifeng exclaimed: "Chunwan, what has happened to you???"

Some took notice of the “red” performance. A Beijing-based media professional under the Weibo (a popular China social network) name Zhangwen de Wenzhang wrote: "春晚，红色娘子军主导！Chunwan has been dominated by the Red Detachment of Women."

Xiong Peiyun, an outspoken commentator, found the program full of conflicting values: "Enslavement and freedom, uglyness and beauty, violence and softness, all displayed on the same stage. If I subscribed to a collective Chinese Dream, it would be a dream that is detached from the 'Red Detachment of Women,' a dream that would lead to a 'rosy life.'"

Writer Beicui criticised the propaganda nature of the gala:

"Chunwan phenomena: Why is it difficult to direct Chunwan? As if it's some chronic disease? What is the root cause? The answer is found in the fact that it uses the show to promote ideology, whoever directs the show has to implement the theme, it's like making plain water into good wine; 2 Why do [people] lash out at Chunwan every year while continuing to watch it? It's for the same reason of ideology promotion, the hotly debated part is the ideology itself rather than the art; 3 The phenomena will last as long as the “grand glow” [referring to directives from state leaders]."

If the Chunwan=marathon, this is the part where the audience is hoping to just cross the finish line without lavishly pooping themselves.

#chunwan too boring for too long. Time to play "put the snacks on the #dog's face" http://t.co/VrOMaRg0YM

You can read the full article by Owen as originally published, and more articles from contributors around the world, at Global Voices Online.