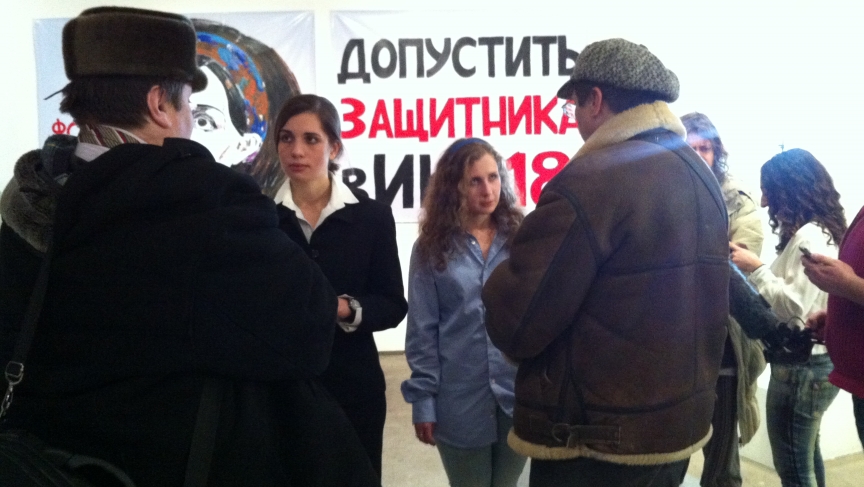 Pussy Riot's Nadezhda Tolokonnikova and Maria Alyokhina speak with two supporters at the Vinzavod Center for Contemporary Art in Moscow. Many wanted to speak with them about prison conditions in Russia.

There are at least a couple of documentary films on Pussy Riot, the art collective notorious for lip-synching a punk protest song in a Russian Orthodox cathedral. But Russian authorities had made it clear, as recently as a month ago, that they didn’t appreciate public attempts to screen such films.

But on a recent night in Moscow, about 100 people packed into a gallery at the Winzavod Center for Contemporary Art to watch the hour-long documentary, “Pussy versus Putin.” Though temperatures outside were well below freezing, inside the gallery it felt like a tiny thaw might be under way in Russia, as the country prepares to host the Winter Olympics.

In December, President Vladimir Putin granted amnesty to the two Pussy Riot members serving time in prison for “hooliganism,” a charge related to their “Punk Prayer” stunt in August 2012. Since being freed, Nadezhda Tolokonnikova and Maria Alyokhina have been speaking out on behalf of prisoner rights in Russia.

Still, the screening of “Pussy versus Putin” wasn’t posted on the gallery’s website, only announced via social media. After the screening, Nadia and Masha, as the two Pussy Riot members are known, told the crowd they’ve registered a new NGO called Zona Prava, or Zone of Law, to advocate for prison reform.

“Right now, we’re working on jails. We want to help prisoners,” Tolokonnikova said. “These are people whom no one talks about, living in horrible conditions. We often hear, ‘What did they do to be in jail?’ I say, ‘what does it matter? They’re people.’”

­­­The crowd around her didn’t consist of the young hipsters you might expect at a Pussy Riot event. Most were older, the generation of Perestroika. And many wanted to talk about prison reform, not brightly colored balaclavas or punk chords.

The gallery walls were filled with posters by Lusine Djanyan, a Russian artist who protested in front of the Siberian prison camp where Tolokonnikova went on a hunger strike in September 2013. That strike drew global attention to prison conditions in Russia. The question is whether Pussy Riot can be as effective now that they’re out of prison — and caught up in an international whirlwind of art awards, concerts, even fashion modeling.

Alyokhina, though, says none of that stuff means anything to the prisoners and former prisoners the group wants to help.

“We call and meet with people who don’t know anything about us,” she says. “We say, ‘Hi, this is Masha Alyokhina,’ or ‘This is Nadia Tolokonnikova calling, and we want to hear your stories from behind bars.’ Not one of these former prisoners knows about us, or our situation.”

Alyokina says she and Tolokonnikova enjoy their relative anonymity here at home. That obscurity exists in part because of a state-controlled media blackout, and also because their style of political activism offends many ordinary Russians, especially when it comes to religion.

It’s also possible the Russian government learned its lesson about tangling with Pussy Riot, according to Marat Guelman, who owns the gallery where the documentary screened. Guelman was a dissident in Soviet times, and he knows that nothing elevates an artist’s career like persecution.

“When government makes big trouble for art, [at] the same time, [the] government makes art bigger. You sing a song, and after you go to the prison, it means [the] song is a powerful weapon,” Guelman says.

Pussy Riot plan to speak at a big benefit concert for Amnesty International in Brooklyn, N.Y., in the beginning of February. Their arrival has been heralded by US media. But while their celebrity status only grows abroad, Pussy Riot may continue to find themselves ignored by the wider public at home in Russia.

For now, at least, that seems to suit them fine.