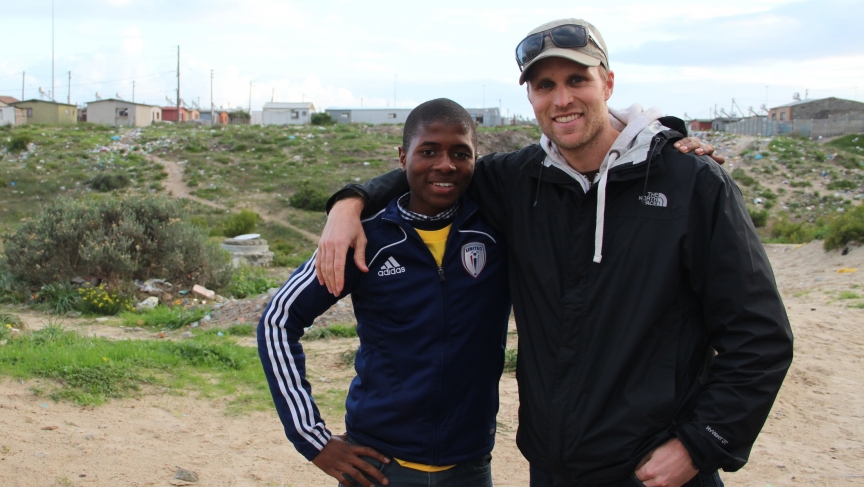 Reporter Anders Kelto (right) with Sivenathi, a student at COSAT.

For the past 12 months, I’ve been embedded in a public high school in Cape Town, South Africa. It’s called the Centre of Science and Technology (COSAT), and it serves families in a sprawling, low-income township.

As in many journalistic endeavors, there were a lot of surprises — and lessons — along the way. Looking back, I learned three things that I never could have predicted.

#1 – I became a source of knowledge for the staff

When I arrived at the school, I expected the flow of information between the teachers and me to be in one direction: I would ask questions, they would provide answers. I would be the one doing the learning.

But on the first day of class, the school’s principal, Phadiela Cooper, challenged that assumption.

“It’s going to be great for us to have you around,” Mrs. Cooper told me. “You’re going to be able to get inside these kids’ lives in a way that we can’t.” She said she knew a lot of students were dealing with difficult lives at home, but she rarely knew specifics.

“I hope you’ll share some of what you find with us,” she said.

Another teacher, Mr. Barnard, sounded impressed when I told him I would be visiting many of the students at home.

“I’ve never set foot in a shack,” he said. “I really have no idea what these kids’ lives are like outside of school.” He said he looked forward to reading my reports.

One instructor told me she was astonished to learn how many of her students had been mugged. Another told me he didn’t realize how often kids were subjected to corporal punishment at home.

And in one situation, a student disclosed to me that she was being abused at home. I informed the principal, who later met with the student and arranged for a social worker to intervene, all without betraying the student's trust in me.

There were also times when students told me things that I didn’t share with the teachers. I had expected that going into the project. But I never imagined that my stories would help the teachers get to know their own students better.

Before I set foot in the school, I reached out to some journalists who had embarked on similar projects. I asked how they navigated the ethics of reporting on disadvantaged kids. I was frequently given the same warning.

“You’ll want to save them all,” another wrote. “Just remember that you can’t.”

As the school year progressed, I developed close relationships with a number of students. Many disclosed highly personal details of their lives, and several ended up in tears. I often found myself switching off the microphone at the end of interviews, and offering advice or support.

Now, looking back on the year, I’ve reached my own conclusion about these relationships: It’s okay to get attached, and to offer support.

I’m glad that I told one student, who was distraught at the thought of leaving high school, that I made many of my best friends in college. That seemed to comfort her.

I’m glad that I started chatting on Facebook with a student after he posted something about feeling lonely. I think my reaching out made him feel better.

I’m glad I gave students rides home after school. It may have helped keep them safe, and it definitely saved them a lot of time.

Sure, some of these things may have crossed a journalistic boundary. But in many situations, it seemed impossible to be both an impartial reporter and a human being.

#3 – Most kids just want their stories to be heard

When I introduced myself to the student body at an assembly last year, the students seemed a bit star-struck. I mentioned that people all over America would be hearing stories about COSAT on the radio. They gasped — then cheered wildly.

I began to worry that some kids might want to speak with me so they could feel like "celebs" (a term they frequently used), or that they would see in me an opportunity to benefit themselves. After all, I was a reporter from the richest country in the world.

I did find a couple of students who wanted to hog the spotlight. And one student asked for money, point-blank.

But on the whole, I found that most kids at the school didn’t want — and didn’t expect — to benefit from their interactions with me in any way.

Sive, a junior who lost his mother, may be the best example of this. Before our story about him aired, I sat down with him in the school library. I asked him to read the script, and to make sure he was comfortable with everything I had written.

He pored over the words and turned the pages with great care. When he finished reading, he lifted his head.

“This whole year, I’ve been thinking my life is like a movie. And I wanted to write it. But now I don’t have to, because I have it here,” he said, holding the pages.

Then, he looked at me.

“It’s just so nice to have someone tell your story,” he said.

I suppose it’s ironic that a woman in the US heard this story and got inspired to help. She raised a thousand dollars for Sive.

But Sive will be the first to tell you that, when he sat down to speak with me, that was the last thing on his mind.